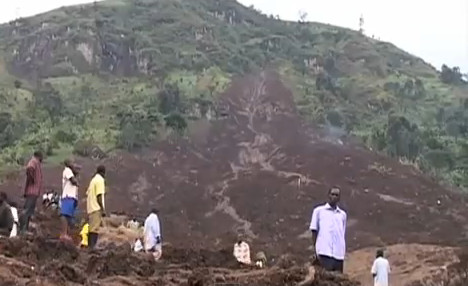 Mount Elgon, Uganda – After heavy rain for a number of days on Monday, June 25, 2012 a series of devastating landslides buried entire villages in parts of the mountainous Bugisu sub-region of eastern Uganda. Eighteen people have been confirmed dead and more than 450 are still reported missing. While people refuse to leave authorities said that 400,000 people from the 6 districts of Bududa Mbale, Sironko, Manafwa, Kapchorwa and Bukwo will be relocated to Kiryandongo and other areas.

A local member of parliament, David Wakikona, said that the areas around Bududa district have been experiencing heavy rains for days now, he was told the landslides started around midday yesterday and that they’re still going. Some villagers who survived the early slides are fleeing.

However, he said many people were refusing to move, as the villages near Mount Elgon had fertile ground and fewer instances of malaria.

Michael Nataka, Uganda Red Cross field officer said that the area is under risk and the Mount Elgon has had so many places with cracks. Each time there is a rainfall for a while, the water just seeps into these cracks and then eventually the landslide happens, he said.

According to the Minister for Relief, Disaster Preparedness and Refugees, Mr. Stephen Malinga, government will have to pass a law restricting people from staying on Mt. Elgon to avert future tragedies and also make them easier to handle.

We shall pass a law to have these people relocated and after the mountain has been rehabilitated and no longer at risk of landslides those who want can go back to their land, Mr. Stephen Malinga, said.

We had begun to relocate these people, and successfully relocated 3000, but the leaders in the area made it impossible for more people to be relocated as they claimed that government wanted to steal their land, he added.

Issa Aliga, a reporter with the Uganda Daily Monitor newspaper, said the local people of the region, known as the Gissu, had refused to be relocated after the first landslide because the new land where the government had wanted to relocate them was not suitable for their way of life.

The people in this area, they say that they have been staying in this area for a long time, and they refused to go by the government’s idea because the people here are cultivators, and they grow coffee. But, in the areas where the government wanted to relocate them is a cattle area where people practice pasturing, Aliga said.

Landslides are common in eastern Uganda, just last August, at least 24 people were killed when mud washed away homes in the Bulambuli district.

In March 2010, thousands were forced to flee after after a landslide killed more than 350 people in Bududa.