Solar activity ranged from low to moderate levels. Region 1476 (N10, L=180, class/area=Fkc/1050 on 09 May) was responsible for almost all x-ray flare activity during the week. It produced a total of 55 C-class flares, 6 M-class flares, and 69 optical flares. 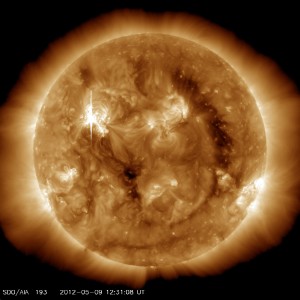 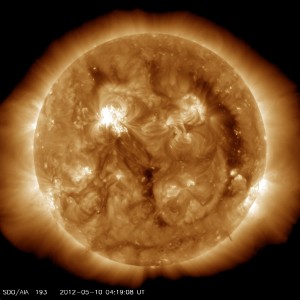 The region then began a slow but steady decline in areal coverage, longitudinal extent and spot count, although it sustained its beta-gamma-delta magnetic configuration.

No proton events were observed at geosynchronous orbit.

The greater than 2 MeV electron flux at geosynchronous orbit was at high levels on the 10th through the 13th, and at moderate levels for the remainder.

Geomagnetic field activity ranged from quiet to active conditions with minor to major storm periods observed at high latitudes. The week began with quiet conditions on 7th and the majority of the 8th. Around 08/04:00 UTC, a solar sector boundary crossing from positive to negative was observed at the ACE spacecraft. By midday, the solar wind speed at ACE began to rise, marking the arrival of a coronal hole high speed stream (CH-HSS). Significant southward Bz began around 17:30 UTC and reached a minimum of -13 nT late on the 8th before beginning a gradual return to neutral conditions late on the 10th. The geomagnetic field responded with active conditions from the last synoptic period on the 8th through the 9th. Minor to major storm levels were observed at high latitudes on the 9th.

Activity subsided to mostly unsettled levels on the 10th, followed by mostly quiet conditions on the 11-12 May. The solar wind speed at ACE remained above 500 km/s until around 13/00:00 UTC. Conditions were mostly unsettled on the 13th. Although there were a number of CMEs identified as potentially earth directed, there was no definitive indication of CME arrival reflected in the ACE data suggesting the transient signatures were obliterated in the high speed stream.