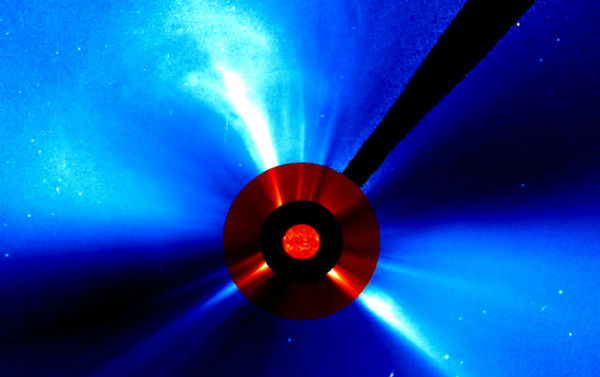 On April 18th and 19th, a series of minor CMEs puffed away from the sun. Three of them are heading in our general direction. Analysts at the Goddard Space Weather Lab have prepared an animated forecast track of the ensemble: 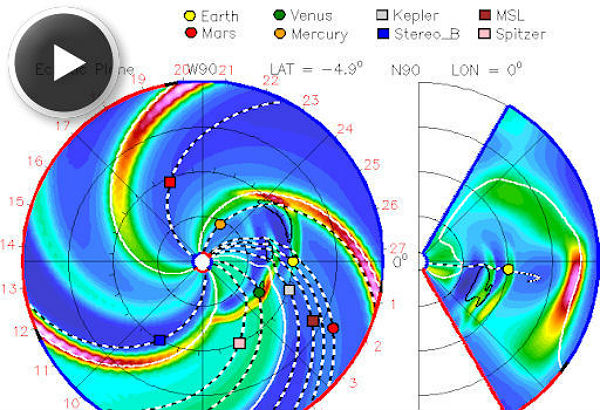 According to the forecast, the clouds are going to hit Mercury, Earth, Mars and rover Curiosity en route to Mars. The impact on our planet, on April 22nd around 00:50 UTC, is expected to be minor with auroras likely only at higher latitudes.

An aurora watch will be in effect during the next 48 – 72 hours. Below is a video by STEREO Ahead COR2 and Lasco C3 showing multiple faint CME’s on Wednesday. Minor geomagnetic activity is expected.

So, folks, it looks there’s nothing to worry about! Go outside and look for auroras if you’re somewhere around polar regions. 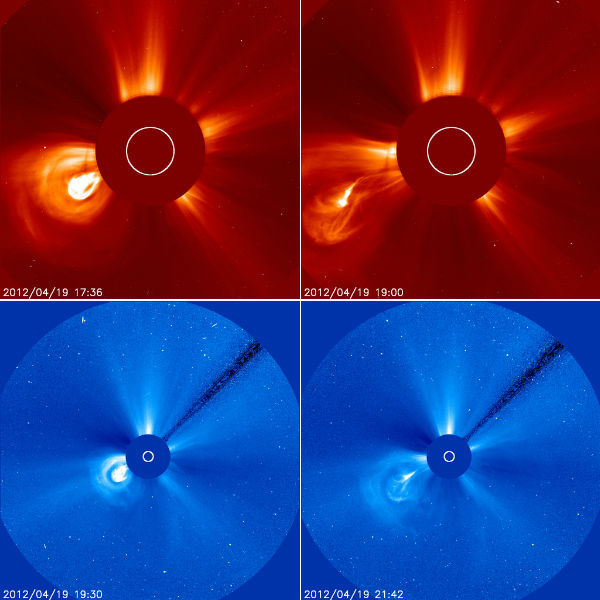 And, just for curiosity – there were few data errors recorded by SOHO’s LASCO C2 and C3 coronographs on same day as seen on the images bellow.

Solar activity was low. New Region 1465 (S17E39 – Dao/beta) emerged early in the period and showed significant growth. It produced occasional C-class flares including a C1/1f parallel-ribbon flare at 20/1501Z. Regions 1459 (S16E01 – Dai/beta), 1460 (N15W15 – Dkc/beta), and 1462 (S25W46 – Dho/beta) also showed significant growth during the period. Region 1462 produced an isolated C-class flare as it grew. There were no Earth-directed CMEs during the period. Solar Activity Forecast: Solar activity is expected to be low through the period (21 – 23 April) with a chance for an isolated M-class flare.

Geomagnetic activity was at quiet to unsettled levels with brief active periods at high latitudes. ACE solar wind data indicated the minor increase in activity was due to a solar sector boundary crossing (SSBC) at approximately 20/0700Z. The SSBC was associated with increased IMF Bt (maximum 8 nT at 20/1059Z) and a period of sustained southward IMF Bz (maximum deflections to -7 nT around 20/0400Z).

Geomagnetic field activity is expected to be at quiet levels during the first half of day 1 (21 April). Activity is forecast to increase to unsettled levels with a chance for active levels beginning around 21/1500Z and continuing into day 3 (23 April) due to expected glancing blows from the partial-halo CMEs observed on 18 and 19 April. There will also be a slight chance for minor storm levels on day 1.