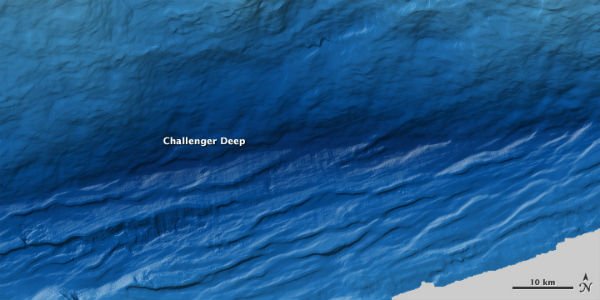 Scientists have a new map of the deepest trench in the world’s deepest ocean. Researchers at the Center for Coastal and Ocean Mapping/Joint Hydrographic Center at the University of New Hampshire (UNH) have pierced the lightless depths of the western Pacific Ocean and drawn a new picture of the Mariana Trench using sound waves. The new map has a resolution of 100 meters per pixel, nearly 20 times more detailed and precise than previous efforts (two kilometers per pixel). 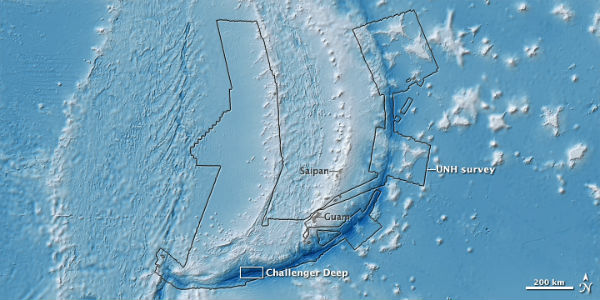 The researchers used multi-beam echo sounders to map the Mariana Trench from August to October 2010. Mounted on the hulls of ships, the instruments send pulsed sound waves toward the seafloor and then record the echo-like reflections. Multi-beam sounders send those pulses out in a fan-shaped swath, allowing researchers to form three-dimensional images of the bottom.

Led by UNH scientists James Gardner and Andrew Armstrong, the underwater survey has yielded the most precise estimate to date of the depth of the Challenger Deep—10,994 meters deep (36,069 feet), plus or minus 40 meters. Researchers also discovered four deep-water “bridges” crossing the trench and standing as much as 2,500 meters above the trench floor. 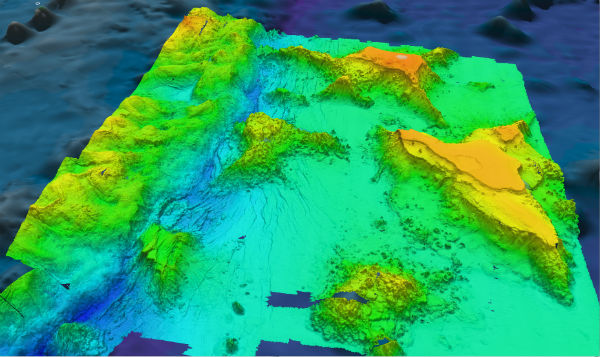 The Mariana Trench stretches 2,500 kilometers (1,500 miles) in an arc that is edged by islands such as Guam and Saipan. Its depths easily dwarf the tallest mountains on Earth’s surface and pressures exceed 1,000 atmospheres, or 1,000 times the air pressure at the land surface. The trench was formed (and is constantly remodeled) by the collision of the old and cold Pacific tectonic plate with the much younger Philippine plate. The Pacific plate is diving under the Philippine plate in a process known as subduction. 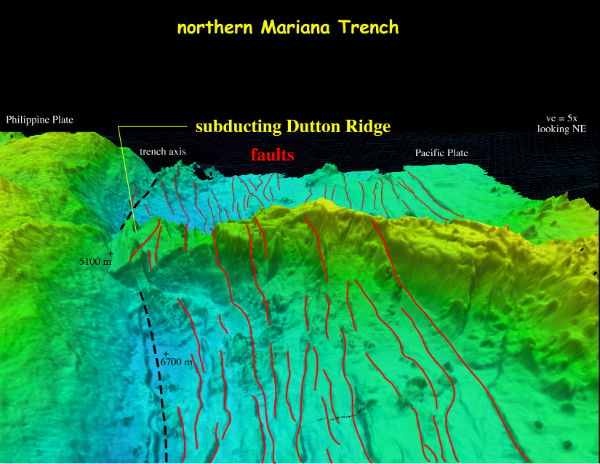 Film director James Cameron made news in March 2012 as the first person to dive to the Challenger Deep in a submersible in more than 50 years. Don Walsh and Jacques Piccard made the first dive in 1960 in the U.S. Navy bathyscaphe Trieste. The Japanese robotic vehicle Kaiko was sent down into the trench three times between 1995 and 1998. Engineers from the Woods Hole Oceanographic Institution and The Johns Hopkins University deployed Nereus, a new hybrid autonomous and tethered underwater vehicle to the Mariana Trench in May 2009, reaching a depth of 10,902 meters. (Earth Observatory) 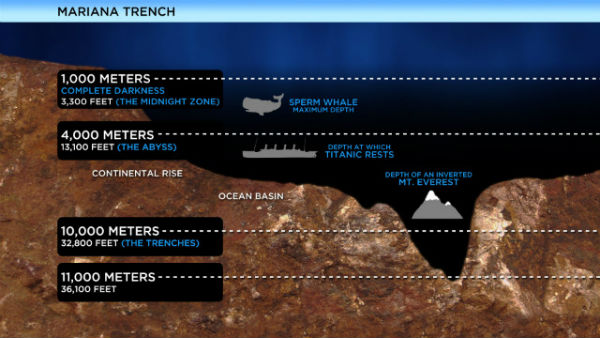