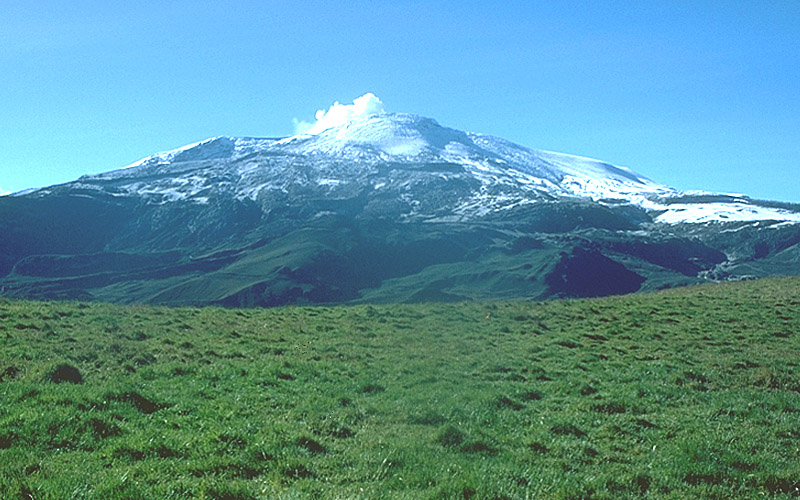 Nevado del Ruiz seems to be getting closer to a new eruption. INGEOMINAS reports that during the last week, there has been a significant increase in the activity of the volcano, which can be summarized as follows:
– From March 27, there have been phases of volcanic tremor pulses related probably to deep magma movements
– Since the last week, there were seismic signals interpreted with rock fracturing, i.e. dike intrusions, located west of the active crater. Similar seismic activity was observed prior to the eruptions in November 1985 and September 1989, although this time it is less energetic.
– On March 29 at 10:54 local time, for a period of 25 minutes, there were over 135 earthquakes located south of Arenas crater at a depth of about 4 km.
– From 04:00 am local time on 31 March, there has been a significant increase in seismicity of events associated with fluid movements and fracturing of rock located in the active crater.
– SO2 emissions continue at high levels.

According to the diagnosis made so far, INGEOMINAS expects an eruption in the coming weeks, but smaller in size than those in November 1985 and September 1989.

Nevado del Ruiz is a broad, glacier-covered volcano in central Colombia that covers >200 sq km. Three major edifices, composed of andesitic and dacitic lavas and andesitic pyroclastics, have been constructed since the beginning of the Pleistocene. The modern cone consists of a broad cluster of lava domes built within the summit caldera of an older Ruiz volcano. The 1-km-wide, 240-m-deep Arenas crater occupies the summit. The prominent La Olleta pyroclastic cone is located on the SW flank, and may also have been active in historical time. Steep headwalls of massive landslides cut the flanks of Nevado del Ruiz. Melting of its summit icecap during historical eruptions, which date back to the 16th century, has resulted in devastating lahars, including one in 1985 that was South America’s deadliest eruption.