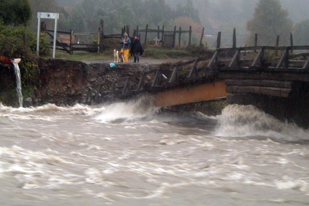 Sunday rains and flash floods in Punta Arenas, extreme south of Chile have left an estimated 800 people homeless forcing the city to close schools while the local chapter of the National Emergency office, Onemi, raised the alarm level from orange (moderate) to red (maximum).

The river Las Minas which crosses the city burst out of its course flooding businesses, several schools and the main square of the city. It is estimated that in less than 30 hours the downpour was equivalent to a third of the whole annual rainfall, causing the flash floods.

“The volume of rainfall has been totally surprising for this time of the year. Punta Arenas is not a city of rains, but of wind and intense cold”, said Vladimiro Mimina, mayor of the city.

The situation had an immediate political reaction: the head of the Magallanes Region Onemi office, Erika Canales, on demand from the central government was sacked.

On Sunday Ms Canales downplayed the intensity of the storm and rainfall and much less the possibility of flash flooding. Santiago dispatched Labour minister Evelyn Matthei and Social Development Joaquin Lavin to coordinate evacuations and emergency support.

“It is the job of all Onemi personnel to inform the population through different means, but that information must also be double checked through government. The maximum possible preventive measures must be taken to avoid risks to the population”, said the Onemi office in Santiago on demanding the resignation of their local agent.

Nevertheless the head of the regional ministerial office, Seremi, Miguel Schweizer said that what happened could not have been anticipated “we had information of 30 mm of rain fall between Sunday and Monday, but the volume was 121 mm”.

The lower part of the city has been most affected with several hotels, hostels and even the casino under water. Tens of cars have been dragged by the intensity of the flash floods. Crews from he Public Works Department are working to drill holes in the Magellan Strait contention wall so as to enable “the evacuation of the water that is running with extreme fury, because the out burst of Las Minas river continues” said Mimica.

The area under flood waters is estimated in 97 hectares. (Source: RSOE-EDIS)

Featured image: Aljazeera.com (this is not actual image of the latest floods – if you have latest images please contact us)