Just 3 days after Japan marked the first anniversary of Great Tohoku earthquake and tsunami disaster that followed – a swarm of earthquakes hit the same region of Japan. Although reports of new earthquakes are still coming in – no damage or tsunami was reported. Area that is most affected today is not the same location as on March 11, 2011 as you can see on the map above. The distance between todays swarm and Great Tohoku earthquake is some 361 km (226 miles).

The region, however, is still producing new earthquakes, updates will be added.

This was a very strong earthquake with epicenter right on the subduction fault line, far out in the sea which weakened the shaking considerably. The Magnitude can be seen as spectacular, but due to the epicenter location, the max. shaking reported by JMA was only 4 (on a scale of 0 to 7).

The main shock was followed by tens of aftershocks

The town of Otsuchi in Iwate prefecture, where more than 800 died in last year’s tsunami, issued an evacuation order to all households along the coast as a precaution, said prefectural disaster management official Shinichi Motoyama. No damage or injury was reported from the quake so far, he said. 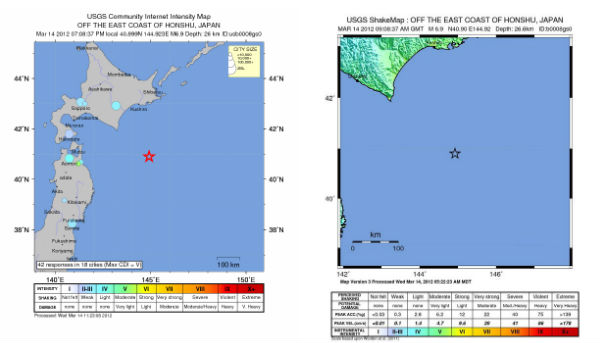 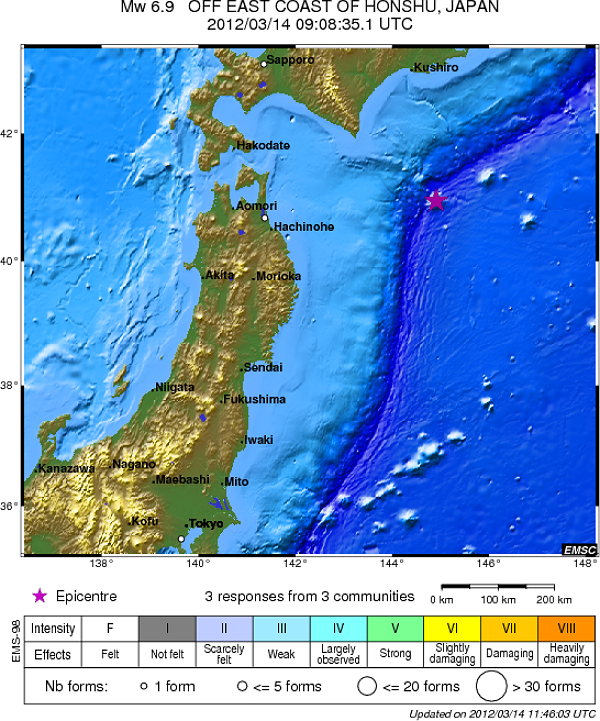 Reported by the Japan Meteorological Agency

No destructive widespread tsunami threat exists based on historical warthquake and tsunami data.

However – earthquakes of this size sometimes generate local tsunamis that can be destructive along coasts located within a hundred kilometers of the earthquake epicenter. Authoritios in the region of the epicenter should be aware of this possibility and take appropriate action. 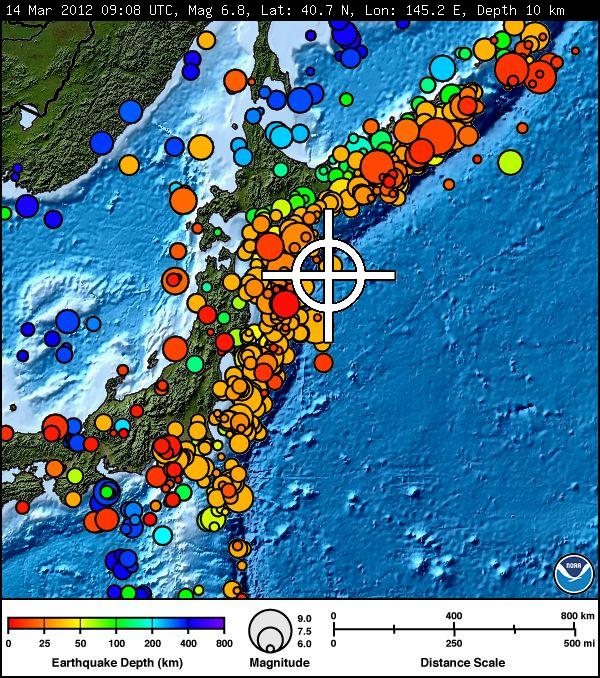 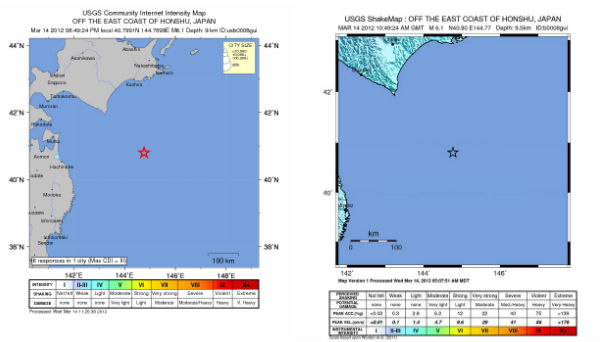 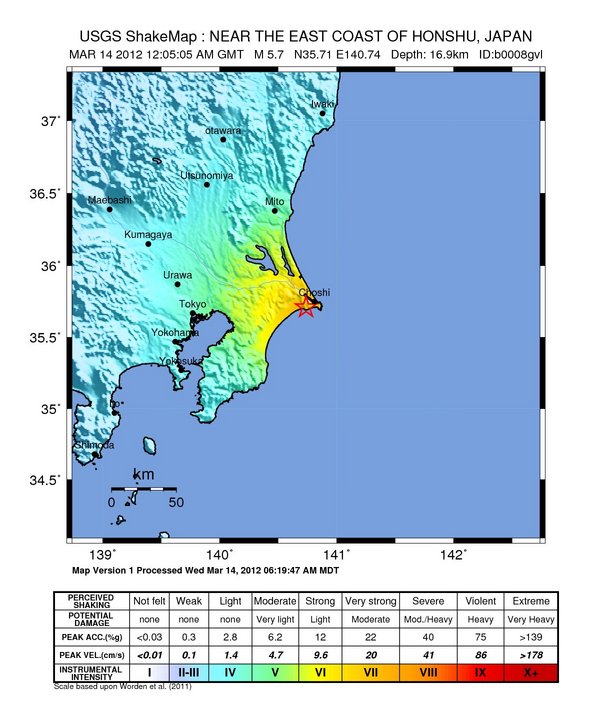 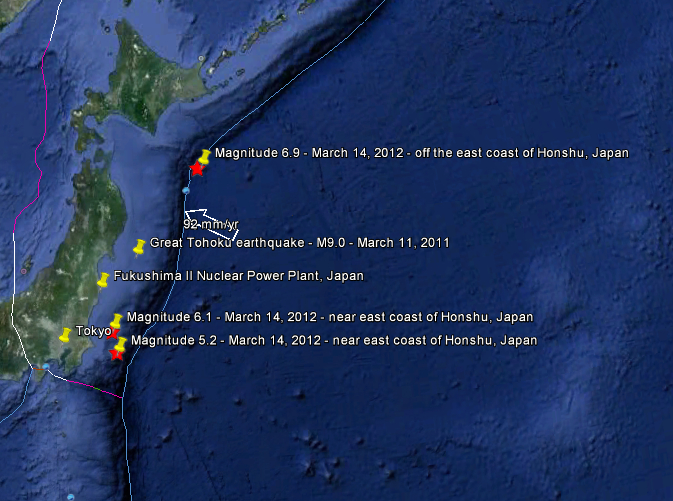 And a strong one on a new region… 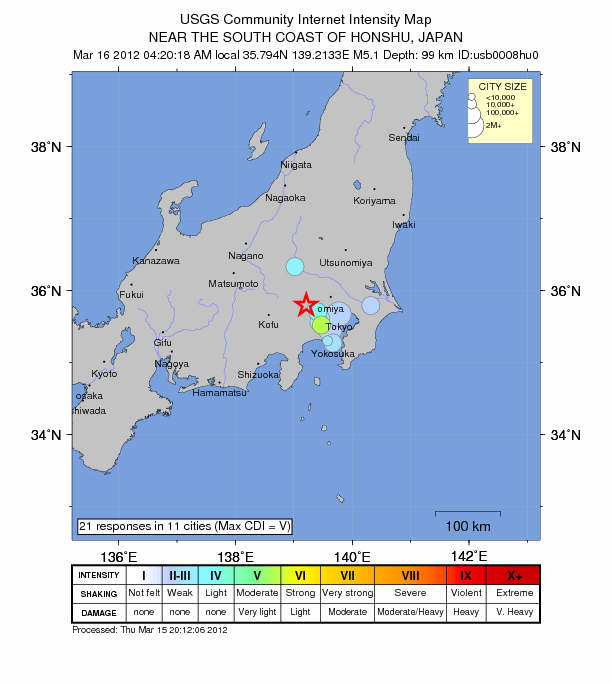 The Pacific Ring of Fire (or just The Ring of Fire) is an area where large numbers of earthquakes and volcanic eruptions occur in the basin of the Pacific Ocean. In a 40,000 km (25,000 mi) horseshoe shape, it is associated with a nearly continuous series of oceanic trenches, volcanic arcs, and volcanic belts and/or plate movements. The Ring of Fire has 452 volcanoes and is home to over 75% of the world’s active and dormant volcanoes. It is sometimes called the circum-Pacific belt or the circum-Pacific seismic belt. 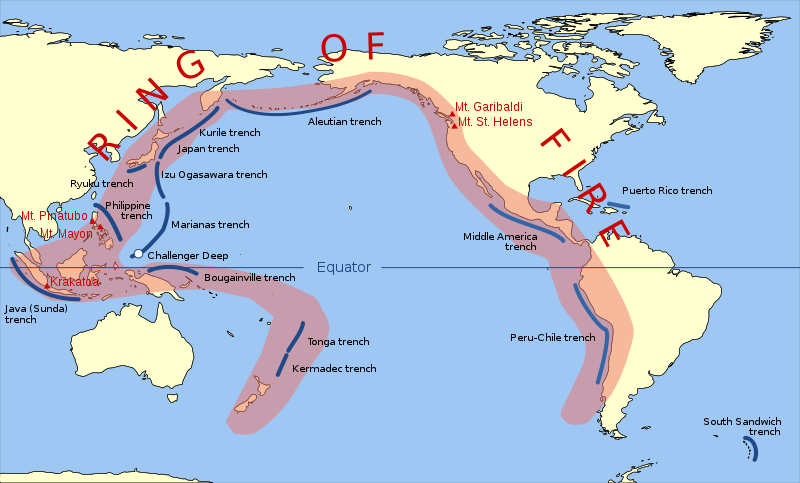