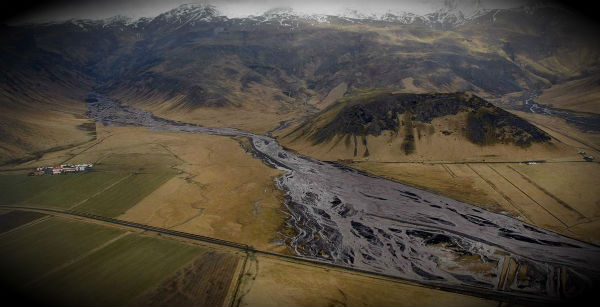 There is a link between large dust storms on Iceland and glacial melting according to new study by a University of Miami Rosenstiel School of Marine and Atmospheric Science led by prof. Joseph M. Prospero and colleagues Joanna E. Bullard and Richard Hodgkins (Loughborough University, U.K.). The results provide new insights on the role of dust in climate change and high-latitude ocean ecosystems. The dust is both accelerating glacial melting and contributing important nutrients to the surrounding North Atlantic Ocean.

A 6-year record of measurements made on Heimaey, an island 17 km (10.5 mi) south of Iceland, reveals frequent dust events with concentrations exceeding 20 micrograms per cubic meter. Much of this potentially iron-rich dust is transported southward and deposited in the North Atlantic. Emissions are highest in spring and spatially and temporally associated with active glacial outwash plains; large dust events appear to be associated with glacial outburst floods. Iceland glaciers are melting at a high rate due to global warming and to sub-glacial volcanic activity. Due to increased air temperatures linked to global climate change, glaciers worldwide are rapidly retreating. The melting of glaciers, including those on Iceland, would also contribute to sea level rise. 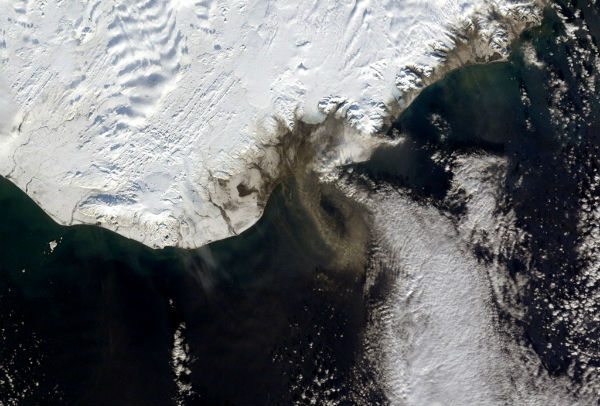 Rivers of black, volcanic-rich sediments flow into the surrounding land and nearby ocean due the glacial melt. Intense windstorms, common in the high-latitudes, eventually sweep up the dried sediments. The black dust deposited on the glacier surface absorbs solar radiation thereby increasing the rates of glacial melting.

Iceland dust can also affect ocean processes over the North Atlantic. The researchers suggest that the iron-rich dust provides a late summer and early fall nutrient boost to . The iron increases the typically iron-depleted North Atlantic Ocean water’s primary productivity and stimulates the growth of marine biota. This process increases the draw down of CO2 from the atmosphere to the ocean. Similar glacier-related dust storms have been seen in Alaska and in Patagonia.

This study is one of the few to look at high-latitude areas, and is the first to review measurements over such a long time period (February 1997 to December 2002).

The study shows that the dust transport in cold, high-latitude regions, such as Iceland, are comparable to concentrations seen at low latitude regions near the equator such as Saharan dust transport across the mid Atlantic, from the west coast of Africa to the Caribbean and South Florida. Researchers point that we can expect that cold climate dust activity will become more widespread and intense as the planet warms. (TerraDaily)

The study, titled “High-Latitude Dust Over the North Atlantic: Inputs from Icelandic Proglacial Dust Storms,” was published in the March 2 issue of the journal Science. Prospero’s co-authors include Joanna E. Bullard and Richard Hodgkins at Loughborough University’s Polar and Alpine Research Centre.