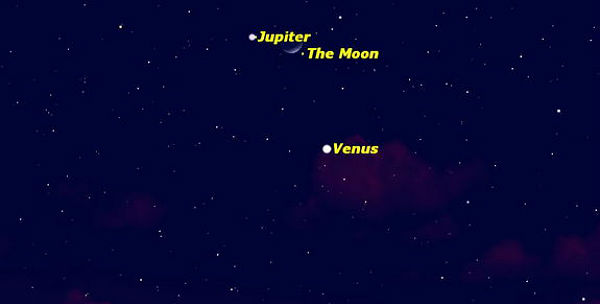 If the weather is clear this weekend, even those who normally do not look at the sky may be struck by a dazzling celestial scene in the west after sunset: a view of two bright planets and an even more eye-catching crescent moon. You can catch them before the sky fades completely black.Venus, Jupiter and the crescent Moon are forming a bright triangle visible through city lights and thin clouds. Skywatchers have already been amazed at the sight of Jupiter and Venus shining together with the moon this week.

The amazing celestial sky show is just getting started. The planets Venus and Jupiter dominate the western evening sky at sunset tonight (Feb. 26), with the crescent moon hovering nearby. The planet Mercury joins them briefly just after sunset before slipping below the horizon and only few hours after sunset planet Mars rises in the eastern sky. Tonight, Jupiter, Venus and Mercury will align in a diagonal line (with Jupiter at the top) with the moon appearing just to the right of the Jupiter and higher than the night before (yesterday the Moon was above and at the right of Venus). This arrangement will be visible all around the world, from city and countryside alike. The moon, Venus and Jupiter are the brightest objects in the night sky and together they can shine through urban lights, fog, and even some clouds. 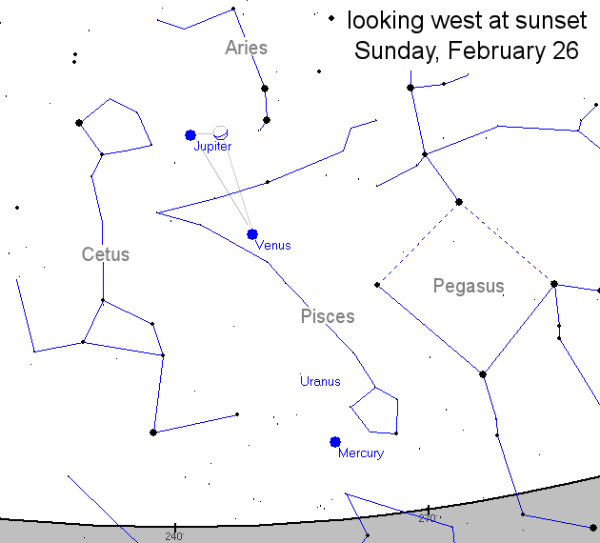 Jupiter and Venus are gradually coming closer together, and they’ll pass each other in the night sky on March 13. By late February, the two planets will creep within 10 degrees of each other in the sky; close enough that you can block them with a closed fist held out at arm’s length. On March 12 and 13, Venus and Jupiter will be so close they can be covered by just your fingertip. On March 14th, 2012, they appear to pass within 3° of one another.

Venus on the rise

Right now Venus can far outshining any other object in the night sky except for the Moon. It’s so bright that you can even glimpse it in the daytime — if you know exactly where to look. For every 8 orbits Earth completes around the Sun, Venus completes 13.004. Late in March, Venus reaches its greatest elongation, the farthest distance it will be from the Sun in the sky as seen from Earth. This year the angular distance will be 46°, or about four-and-a-half fist widths.  And on June 5-6 Venus will transit the Sun, visible (hopefully) from Earth as a small black dot on our star’s yellow disk. More about it coming soon on our pages.

In case that your local weather brings clouds or rain, you can watch it via the online Slooh Space Camera. It will webcast the action live on Sunday and Monday (Feb. 26 and 27) at 02:30 UTC and will provide footage from multiple observatories around the world, including Arizona and the Canary Islands off the coast of Africa. This will be free webcast. 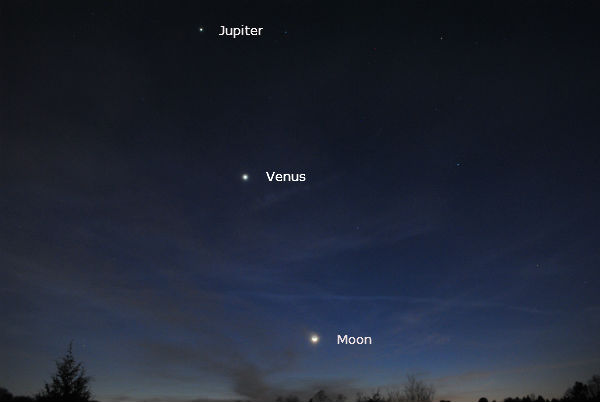 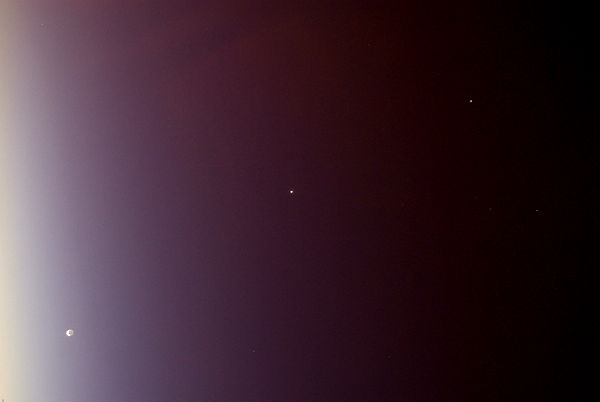 The moon is offering a dazzling sight of its own. The skinny crescent moon offers skywatchers a good chance to see the ghostly glow of earthshine — light from the sun that is reflected off of Earth to illuminate the dark portion of the moon in its current phase. Calendars, such as the ones used in the Jewish and Muslim faiths, have lunar months that begin on the evening when the crescent moon first appearance in the western sky at sundown. Astronomers define the “new moon” as that moment when the moon occupies the same ecliptic longitude as the sun. Since the moon is then in close proximity to the sun in the sky, it cannot be seen (unless in silhouette during a solar eclipse). The term “new moon”  can refer to when the moon appears as a narrow sliver over the next few evenings, adding delicate beauty to the western twilight as a thin arc of light enclosing a ghostly ball. Here was the signal by which the ancients set their calendars. 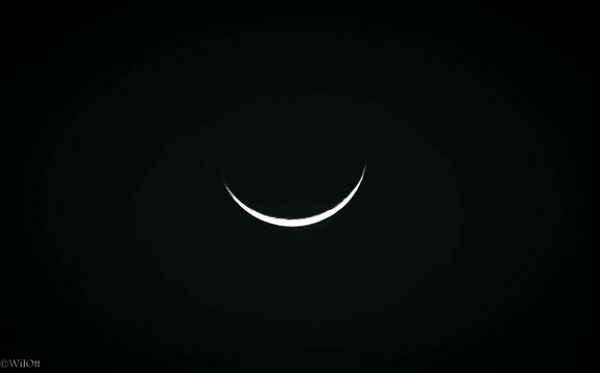 The opening of Adar, the sixth month of the year 5772 in the Jewish Calendar began with so-called “Knife of Time Moon” which hung low in the western twilight sky on February 23. Symbolically, the moon’s phases and cycle seemingly cut the year into convenient segments. The cusps or “horns” of the crescent moon always point directly away from the sun’s place; after new phase they’re pointing in the direction that the moon is going.