On March 24th, 25th and 26th, Venus, Jupiter and crescent Moon will appear side by side again in the western sky at sunset. Best time for observing the sky show is before the sky fades completely black. These bright objects are extra-beautiful when they are framed by twilight blue. 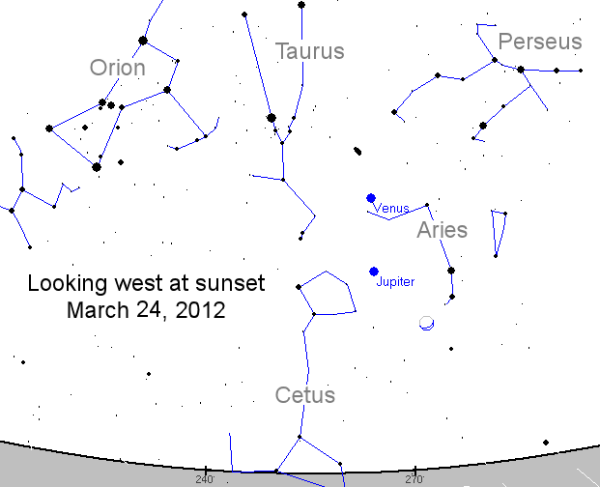 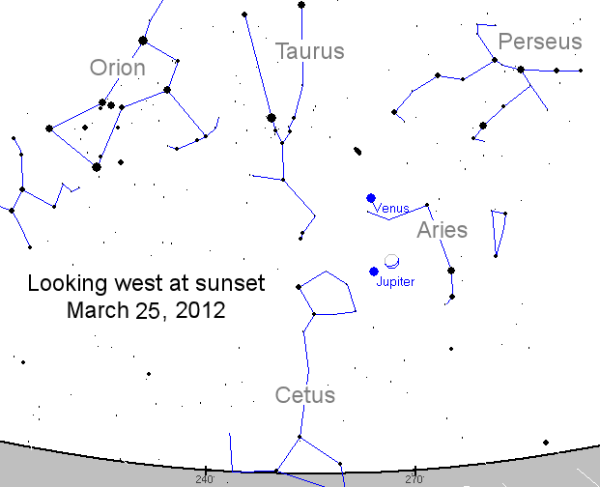 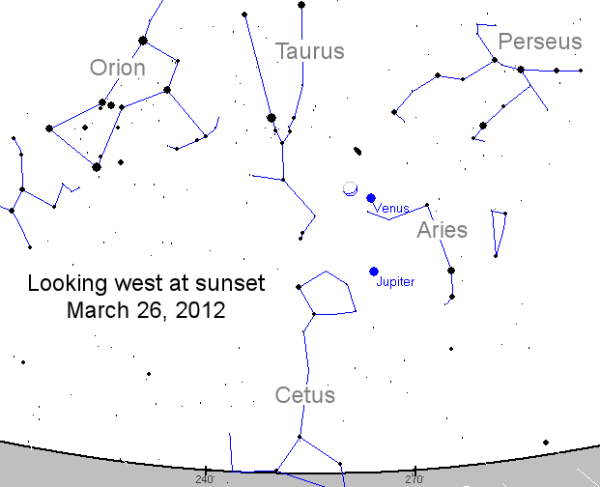 The moon is only about 248,000 miles (400,000 km) from our earthly vantage point, and appears to move much more rapidly against the starry backdrop night to night, as opposed to the more distant dynamic duo of Venus (67 million miles, or 108 million km) and Jupiter (535 million miles, or 861 million km).  So on Sunday evening, a slender sliver of a crescent moon will sit less than 3 degrees to the right and slightly above Jupiter. For North Americans, the two objects appear closest together at around 9 p.m. EDT. Venus will about 10 degrees above them (your clenched fist held at arm’s length is roughly equal to 10 degrees). The trio will resemble a long, narrow isosceles triangle with the arrowhead (at Venus) pointing upward.

By Monday evening, the moon will have vaulted up to meet Venus. The moon will be a slightly wider crescent, sitting less than 3 degrees to the left and a bit above Venus. Now the triangle configuration will have flipped; the arrowhead (at Jupiter) will be pointing downward. (Space.com)


Jupiter will soon be ending its brilliant nearly year-long showing in the coming weeks.   Currently, the giant planet is still easy to spot below Venus, but after mid April it will be setting just as evening twilight ends, about 90 minutes after sunset. By the third week of April, Jupiter becomes much harder to see as it sinks lower into the sunset. The last view of it for most people should come on or about April 24. Thereafter, Jupiter will be invisible. It will next return to view before the onset of dawn during the final week of June.

In contrast, Venus will be growing ever brighter. Our sister world, now standing at its highest point above the horizon for 2012, currently shines long into the night setting four hours after sunset.  On Tuesday (March 27), Venus is at greatest eastern elongation from the sun (46 degrees). Thereafter it will begin descending back toward the western evening horizon, slowly at first, then with increasing speed in May. In a telescope, Venus will appear as a dazzling silver-white “half moon,” then gradually become a thick crescent while growing larger as it swings around its orbit closer to Earth.  But on Sunday and Monday, Venus will share top billing with Jupiter and the moon. On those evenings, these three brightest objects of the night will call everyone’s attention to the western sky as darkness falls. 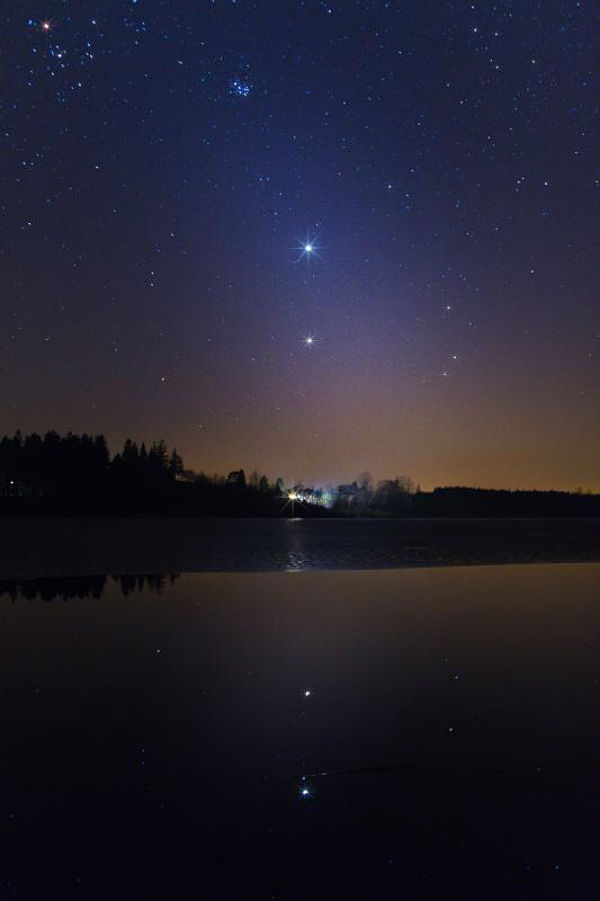