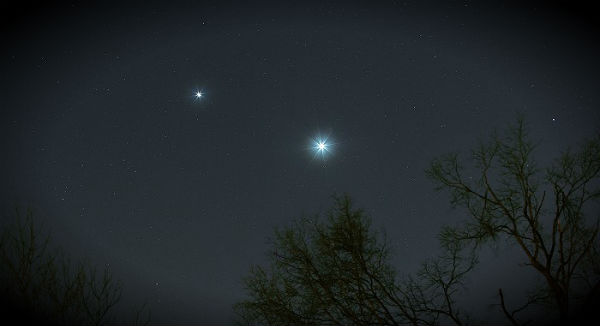 Venus and Jupiter are the second and third brightest objects in the night sky, after the Moon. Every evening Venus has appeared higher and Jupiter lower on the western sky. Now they’re about to cross paths. From now until March 17th the two planets will be within 5° of each other, fitting in a single field of view through most binoculars. They will be 3° apart at their closest approach on March 13th. As the distance between them shrinks, Venus and Jupiter can become physiologically mesmerizing, according to NASA.

Look for them before the sky fades completely black. With supported binoculars you will be able to see Jupiter’s four Galilean moons (as long as they’re not too close to the planet) and Jupiter’s tiny disk. You may also be able to make out Venus’s disk, which appears slightly more than half as wide as Jupiter’s. And if you look even more carefully, you might see that Venus is now in its gibbous phase, only 60% lit. Venus will appear nearly eight times brighter than Jupiter. Planets will shine in a completely dark sky for more than two hours before finally disappearing beyond the west-southwest horizon after 10:30 p.m. local daylight time. 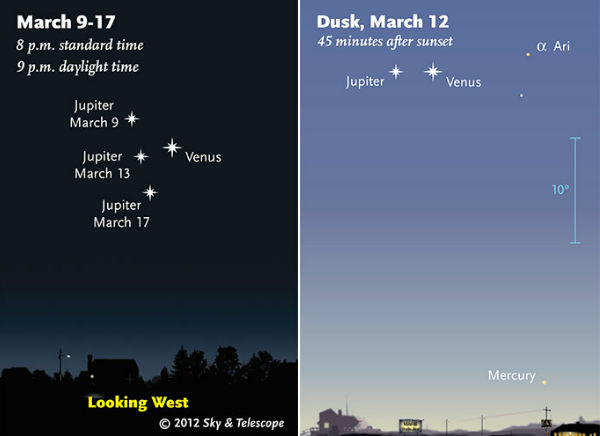 When the planets are closest, Venus will glow at magnitude -4.3, while Jupiter will shine at -2.1 on astronomers’ magnitude scale in which lower numbers correspond to brighter objects. Negative numbers suggest an extremely bright view – the lower the figure of magnitude, the brighter the object.

After this conjunction, Jupiter will slowly disappear from the evening sky, becoming difficult to observe by mid-April. But Venus will reach its highest and brightest in April. That’s also when it will start to be a spectacular crescent through a telescope. Two planets will be paired again in late June and early July, but not as closely and very inconvenient to observe, low in twilight before dawn on some of the longest days of the year. They will be spectacularly close after sunsets in late May 2013, with Mercury nearby to add to the excitement. Unfortunately, the trio will be very low in bright twilight.

Venus and Jupiter won’t appear together again in a fully dark sky until June 2015. But that will be a truly amazing conjunction, with both planets fitting together in a high-power telescopic field of view. (Sky&Telescope)

No less than six full moons can be lined up in the space between those planets. This is because the apparent width of the moon equals about 0.5 degrees, so certainly six moons should fit the 3-degree gap between the two planets.  And when you look up at actual situation it looks like only two or three moons can fit. This strange illusion also extends to the “pretend universe” of the planetarium. (Space.com)