Since first spotted by NASA's Juno space probe in 2019, a collection of swirling storms arranged in an unusually geometric pattern has been a mystery to most scientists. A new study may have uncovered how the strange weather forms and why the storms behave oddly.

Andy Ingersoll, a Caltech professor of planetary science who was a member of the Juno team, said Jupiter's storms are notably similar to the ones that hit the U.S. East Coast every summer and fall, but on a larger scale.

"If you went below the cloud tops, you would probably find liquid water raindrops, hail, and snow," he explained.

"The winds would be hurricane-force winds. Hurricanes on Earth are a good analog of the individual vortices within these arrangements we see on Jupiter, but there is nothing so stunningly beautiful here."

Jupiter's storms tend to form near the equator and then move toward the poles, as on Earth. However, hurricanes and typhoons in our planet dissipate before they drift too far from the equator. Meanwhile, Jupiter's storms keep going until they arrive on the poles.

"The difference is that on the earth hurricanes run out of warm water and they run into continents," Ingersoll added.

Jupiter has no land, "so there's much less friction because there's nothing to rub against. There's just more gas under the clouds. Jupiter also has heat leftover from its formation that is comparable to the heat it gets from the sun, so the temperature difference between its equator and its poles is not as great as it is on Earth." 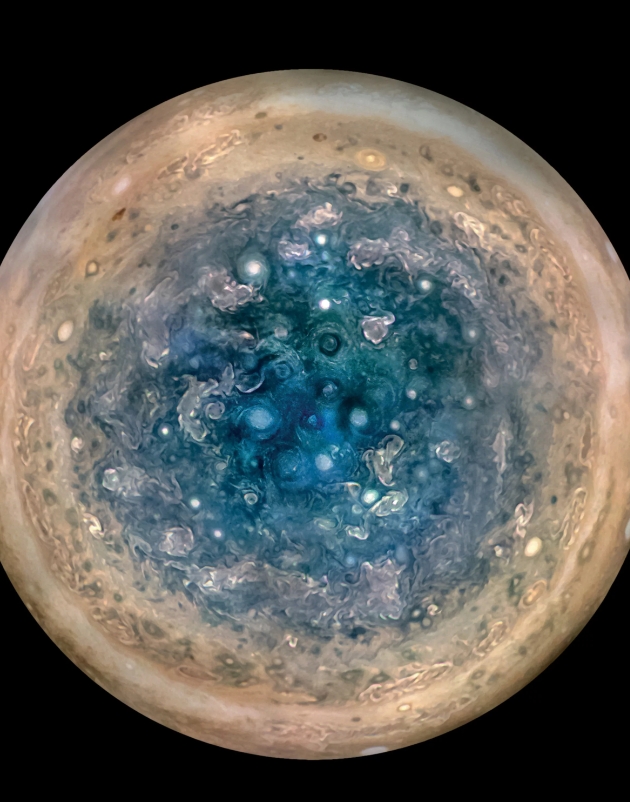 However, this explanation still does not account for the storm's odd behavior when they reach Jupiter's south pole. Saturn, also a gas giant, has one massive storm at each of its poles, rather than a geometrically-arranged collection of storms.

Ingersoll, along with his colleagues, discovered that the answer to this mystery could be found in the past, mainly in the work conducted in 1878 by American physicist Alfred Mayer and Lord Kelvin.

Mayer placed floating circular magnets in a pool of water and observed that the magnets would arrange themselves into geometric configurations spontaneously, similar to those on Jupiter. The shapes depended on the number of magnets. Meanwhile, Kelvin used Mayer's observations to make a mathematical model that can explain the behavior.

"Back in the 19th century, people were thinking about how spinning pieces of fluid would arrange themselves into polygons. Although there were lots of laboratory studies of these fluid polygons, no one had thought of applying that to a planetary surface," said Ingersoll.

The team used a set of equations called the shallow-water equations to create a computer model of what might be occurring on Jupiter.

"We wanted to explore the combination of parameters that makes these cyclones stable," said lead author Cheng Li. "There are established theories that predict that cyclones tend to merge at the pole due to the rotation of the planet and so we found in the initial trial runs."

The team eventually found that a Jupiter-like stable geometric arrangement of storms would form if the storms were surrounded by a ring of winds that turned in the other direction, opposite from the spinning storms or anticyclonic ring. The presence of such rings causes the storms to repel, instead of merge.

"Other planets provide a much wider range of behaviors than what you see on Earth, so you study the weather on other planets in order to stress-test your theories," said Ingersoll, adding that the study could help scientists further understand Earth weather.

"Modeling the stability of polygonal patterns of vortices at the poles of Jupiter as revealed by the Juno spacecraft" – Li, C. et al. – Proceedings of the National Academy of Sciences – DOI: 10.1073/pnas.2008440117

From its pole-to-pole orbit, the Juno spacecraft discovered arrays of cyclonic vortices in polygonal patterns around the poles of Jupiter. In the north, there are eight vortices around a central vortex, and in the south there are five. The patterns and the individual vortices that define them have been stable since August 2016. The azimuthal velocity profile vs. radius has been measured, but vertical structure is unknown. Here, we ask, what repulsive mechanism prevents the vortices from merging, given that cyclones drift poleward in atmospheres of rotating planets like Earth? What atmospheric properties distinguish Jupiter from Saturn, which has only one cyclone at each pole? We model the vortices using the shallow water equations, which describe a single layer of fluid that moves horizontally and has a free surface that moves up and down in response to fluid convergence and divergence. We find that the stability of the pattern depends mostly on shielding—an anticyclonic ring around each cyclone, but also on the depth. Too little shielding and small depth lead to merging and loss of the polygonal pattern. Too much shielding causes the cyclonic and anticyclonic parts of the vortices to fly apart. The stable polygons exist in between. Why Jupiter’s vortices occupy this middle range is unknown. The budget—how the vortices appear and disappear—is also unknown, since no changes, except for an intruder that visited the south pole briefly, have occurred at either pole since Juno arrived at Jupiter in 2016.