According to a new study published in The Astronomical Journal, comet motions indicate that the solar system has a second alignment plane. The discovery has significant implications for models of how comets originally formed in the solar system.

In the solar system, the planets and most other bodies move in roughly the same orbital plane, known as the ecliptic, but there are exceptions such as comets. Comets, especially long-period comets taking tens-of-thousands of years to complete each orbit, are not confined to the area near the ecliptic; they are seen coming and going in various directions.

Models of solar system formation suggest that even long-period comets originally formed near the ecliptic and were later scattered into the orbits observed today through gravitational interactions, most notably with the gas giant planets.

But even with planetary scattering, the comet's aphelion, the point where it is farthest from the Sun, should remain near the ecliptic. Other external forces are needed to explain the observed distribution. 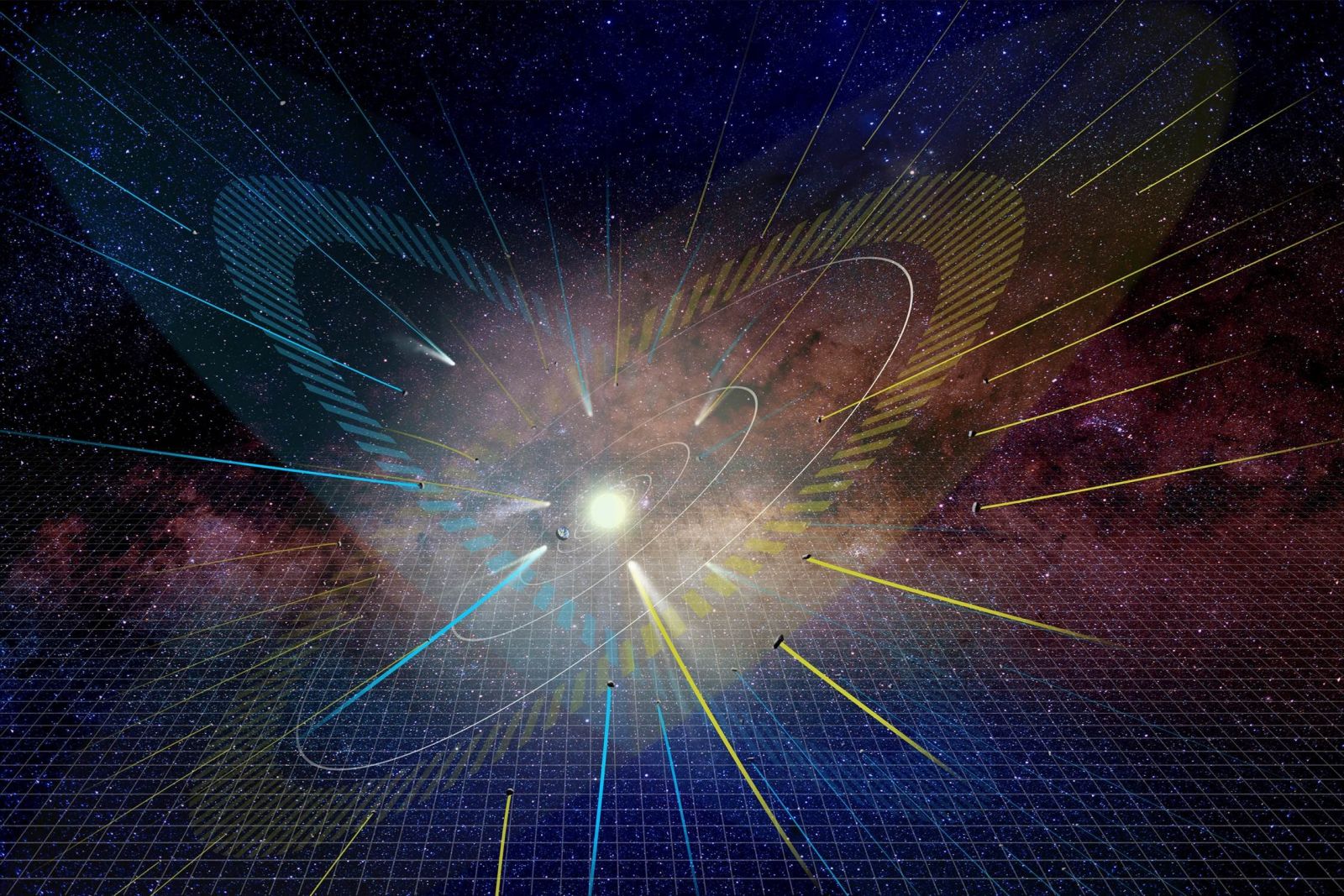 Artist’s impression of the distribution of long-period comets. The converging lines represent the paths of the comets. The ecliptic plane is shown in yellow and the empty ecliptic is shown in blue. The background grid represents the plane of the Galactic disk. Image credit: NAOJ

The solar system does not exist in isolation; the gravitational field of the Milky Way galaxy in which the solar system resides also exerts a small but non-negligible influence.

Higuchi showed that when the galactic gravity is taken into account, the aphelia of long-period comets tend to collect around two planes. First the well-known ecliptic, but also a second "empty ecliptic." The ecliptic is inclined with respect to the disk of the Milky Way by about 60 degrees.

The empty ecliptic is also inclined by 60 degrees, but in the opposite direction. Higuchi calls this the "empty ecliptic" based on mathematical nomenclature and because initially it contains no objects, only later being populated with scattered comets.

She confirmed her predictions by cross-checking with numerical computations carried out in part on the PC Cluster at the Center for Computational Astrophysics of NAOJ.

Comparing the analytical and computational results to the data for long-period comets listed in NASA's JPL Small Body Database showed that the distribution has two peaks, near the ecliptic and empty ecliptic as predicted.

This is a strong indication that the formation models are correct and long-period comets formed on the ecliptic.

However, Higuchi cautions, "The sharp peaks are not exactly at the ecliptic or empty ecliptic planes, but near them. An investigation of the distribution of observed small bodies has to include many factors. Detailed examination of the distribution of long-period comets will be our future work. The all-sky survey project known as the Legacy Survey of Space and Time (LSST) will provide valuable information for this study."

Featured image: Artist’s impression of the distribution of long-period comets. The converging lines represent the paths of the comets. The ecliptic plane is shown in yellow and the empty ecliptic is shown in blue. The background grid represents the plane of the galactic disk. Credit: NAOJ