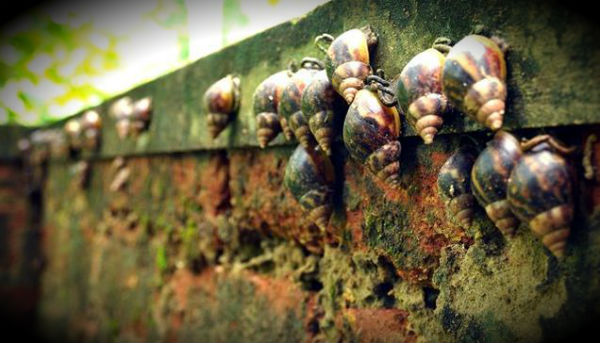 Southern Florida is in a panic over potential crop damage and plant diseases. The reason for this are the slimy gastropods. The US and Florida departments of agriculture have mobilized 34 agents to battle the invasion of African giant snails, up to 20 centimeters (eight inches) long making it the one of world’s largest snail species . US Fish & Wildlife Service is heading up an investigation into how the mollusks arrived. African snail can be up to 20 centimeters (eight inches) long. According to SeedDaily, state authorities say they have captured 35,000 since the invasion began in September.

The Achatina fulica, or giant African land snail, can live up to nine years, and are prolific in reproduction, laying up to 1,200 eggs a year, making it extremely invasive. A single snail can create a mass that invades an entire neighborhood. Originally from east Africa, they have also been found in Caribbean islands including Guadeloupe and Martinique. They like to eat the stucco off the sides of the houses because it contains calcium, and the calcium helps to build their shells. The snail’s mucus can contain a parasite which transmits a form of meningitis, which is not lethal but can provoke extreme abdominal pain. The pest is also a threat to agriculture, feasting on some 500 plant varieties including peanuts and melons. Authorities are hoping to bring down the population before the spring rains, which could cause a population surge. The eradication effort is in full force even though the snails are in a sort of hibernation during which they dig themselves into the ground, making them less visible.

Here is one interesting example so you can get a bigger picture. In 1966, a boy imported three giant snails as pets, and his grandmother released them into the wild, which led to a colony of 18,000. The eradication effort took nine years and cost over one million dollars. 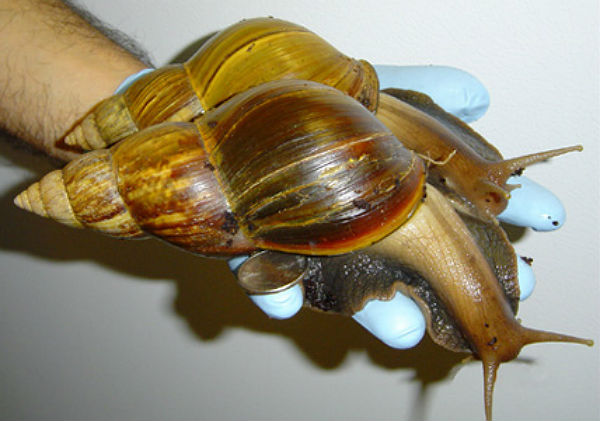 Invasion of non-native species in Florida

Importation of these animals is illegal in the United States without a federal permit. But officials point out they are used in certain Afro-Caribbean religious practices. Some suggestions are that the snails were brought over for religious ceremonies, commonly used in certain Afro-Caribbean religious practices, or maybe runaway pets. Authorities also are trying to determine if the outbreak of snails is tied to a smuggling case uncovered last year. According to Miami Herald, in 2010, federal officials opened a criminal investigation into one  Hialeah resident, who was accused of smuggling the creatures here. He practiced the traditional African religion Ifa Orisha, and authorities said he persuaded his followers to drink the snails’ juices as part of a healing ritual. Several practitioners became violently ill.

Southern Florida could be called  the center of weird invasive species. Increasing populations of Burmese Python and Nile Monitor lizard and now giant African snails posses a serious threat to native species and eco-system in general. It is estimated that as many as 150,000 Burmese pythons are living in the Everglades and may be wreaking havoc upon the indigenous wildlife. Bought as pets and released into the wild when owners decide that they’ve grown too large to keep and feed, the giant snakes thrive virtually predator-free in the Florida wetlands. They also reproduce quickly and can lay from 50-100 eggs in a single clutch. One of the largest snakes in the world, a mature python can eat an animal as large as a deer or even a fully grown alligator. Also a nuisance are Florida’s feral pigs, which – consummate omnivores that they are – eat virtually everything. The pigs are thought to have been living in the wilds of the state since Spanish colonists first arrived with domesticated livestock. Other introduced species include migrating coyotes, the African Sacred Ibis (once venerated in ancient Egypt) and – perhaps the most destructive of all – the common house cat, which is one of the most successful small predators in the animal kingdom.

Among most threatened species are the Florida panther, the West Indian manatee and the American crocodile. Many of these animals live in parts of the Everglades that are not part of the National park and are therefore not well protected. Some, like the Florida panther, require large hunting grounds, which are being progressively encroached upon by housing and urban developments. Florida’s once threatened alligator population has experienced a strong revival in the past 30 years and was declared ‘fully recovered’ in 1987 by the Fish and Wildlife Service. (GreenFudge) 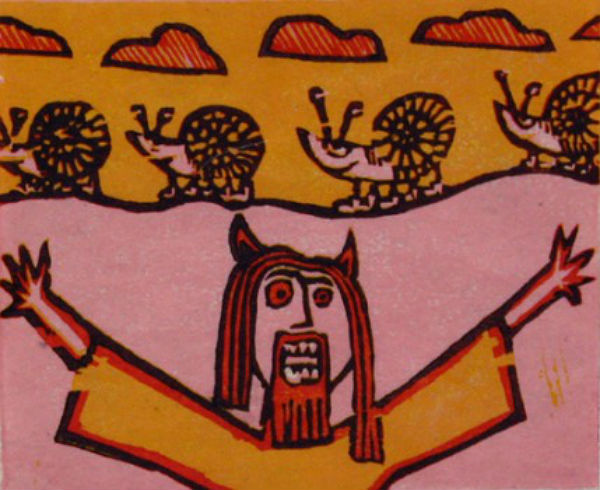 How officials battle the snail invasion?

The captured gastropods are taken to a lab where specialists like Mary Yong examine them and, ultimately, kill them off. The snails are effectively drowned in an alcohol solution. Or scientists toss them in the freezer to ensure they are dead. Officials say the areas being cleaned up will remain under scrutiny for several months. Gardens are treated with iron phosphate, which are not harmful to other animals, but disrupt the snails’ feeding habits. Iron phosphate is approved for use in the practice of organic farming. Unlike the older metaldehyde, it is promoted as non-toxic to pets and wildlife. It is also used rarely as an iron nutritional supplement (Ferrum phosphoricum) and to reduce the risk of both haemorrhages and nosebleeds. The substance is not allowed to be included in food inside the European Union. The substance was withdrawn from the list of allowed substances in the directive 2002/46/EC in 2007. The effectiveness of iron phosphate baits depends in part on how many slugs and snails encounter and ingest the bait. Since slugs are underground most of the time, many may not come in contact with the bait, so total elimination is impossible to achieve with any pesticide. A kill rate when using phosphate slug bait is considered to be around 60%.

In Bill Meyer’s work called “Iron Phosphate Slug Bait – How Dangerous is it in the Garden?”, he points that the dangers of metaldehyde slug baits are well understood and fairly well documented. No one anywhere puts forth the idea that they are safe for people or animals to eat. The dangers of eating iron phosphate lug baits on the other hand are not even mentioned, certainly not by those who are trying to sell or promote those products. No research has been done on the consequences of a child or dog consuming the product, and the first dog poisoning cases, including deaths, have been confirmed. Many sources of gardening information continue to tout iron phosphate baits as completely safe for children, pets, and wildlife despite having no real proof that such claims are true and can point to no studies that show that. The Swiss FiBL study said that  is more poisonous than metaldehyde and that they didn’t think the iron phosphate slug bait products would be much safer than metaldehyde baits. As poisoning reports come in, it appears they are right. If Ohio State University and Australia’s Veterinary Journal are to be believed, dogs are being poisoned by these baits, and the potential is there for children to be as well. Both metaldehyde and iron phosphate baits are pretty safe if used properly, but they are both dangerous poisons if consumed in enough quantity.