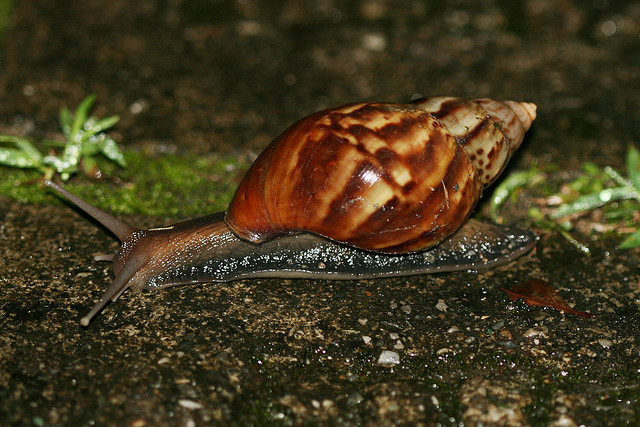 Giant snails appear to be invading Texas, according to new reports, and some health experts worry that the unusual creatures might begin spreading a disease that could be deadly to humans. As reported by NBC News, a Houston woman recently discovered what is believed to be the first known instance of a particular type of snail species in Texas, the Giant African land snail, which has ignited a firestorm of localized panic over the potential spread of meningitis.

The Austin-based Lady Bird Johnson Wildflower Center was the first to hear about the sighting after a woman living in Houston's Briar Forest neighborhood spotted a snail roughly the size of loaf of bread slithering through her backyard garden. The woman snapped a photo of the snail and sent it to authorities, who forwarded it to experts who later identified it as a potential Giant African. According to reports, this would be the first time a Giant African has been spotted and identified in Texas.

If it were not for the fact that the snail identified may potentially be a Giant African, the situation could simply be written off as a surprising and unexpected sighting of an unusually large snail. But Giant Africans are believed to be carriers of meningitis, an inflammatory condition that infects the brain and spinal cord. In some cases, people who become infected with meningitis die, which is why authorities were quick to issue warnings not to touch the large snails if they spotted any.

"They … carry a parasitic disease that can cause a lot of harm to humans and sometimes even death," said Autumn Smith-Herron, Director of the Institute for the Study of Invasive Species at Sam Houston State University, to KPRC Local 2 in Houston.

A neighbor of the woman who found the snail also expressed concerns, particularly about young children who might try to touch the snails. Since giant snails can lay upwards of 100 eggs per month in normal conditions, local experts fear that there may be other snails, and that their multiplication and migration could end up becoming a public health threat.

"If one African land snail pops up, you can count on seeing a few more," states a Huffington Post article about the issue. This same report explains that African land snails are considered to be the most "damaging" of all snails because they are disease carriers. "These suckers can hatch around 1,200 eggs annually and live for up to nine years. They don't only gnaw on garden greenery either – African land snails have a penchant for snacking on stucco and other home materials as well."

After getting wind of the snail's spotting, the U.S. Department of Agriculture (USDA) chimed in and quelled some of the fears by explaining that large snails are often misidentified, and that this may have been the case in Houston. USDA Animal and Plant Health Inspection Service spokeswoman Tanya Espinosa told the Huffington Post that the snail in question may actually be a Rosy Wolf snail, which is apparently native to the Houston area.

"We have no reason to believe there are Giant African snails in Texas at this time," Espinosa is quoted as saying.

Meanwhile, more than 100,000 Giant Africans were collected in Florida earlier this year, according to reports. And others have been spotted in the Great Lakes region as well, which suggests that the creatures are already a problem in other regions of the U.S.