A dust storm swept over the Arabian Peninsula in early February 2012. This dust storm follows a familiar pattern for this region, with especially thick dust occurring in Saudi Arabia’s southwest. Toward the northeast, the dust thins enough to allow the dark waters of the Persian Gulf to become visible, as well as the tan land of Qatar and Bahrain.

This storm likely draws at least some of its dust from the Arabian Peninsula’s Empty Quarter, or Rub’ al Khali. Sprawling over parts of Saudi Arabia, Yemen, Oman, and the United Arab Emirates, Rub’ al Khali is the largest sand sea on Earth, and it holds about half as much sand as the Sahara Desert. (MODIS) 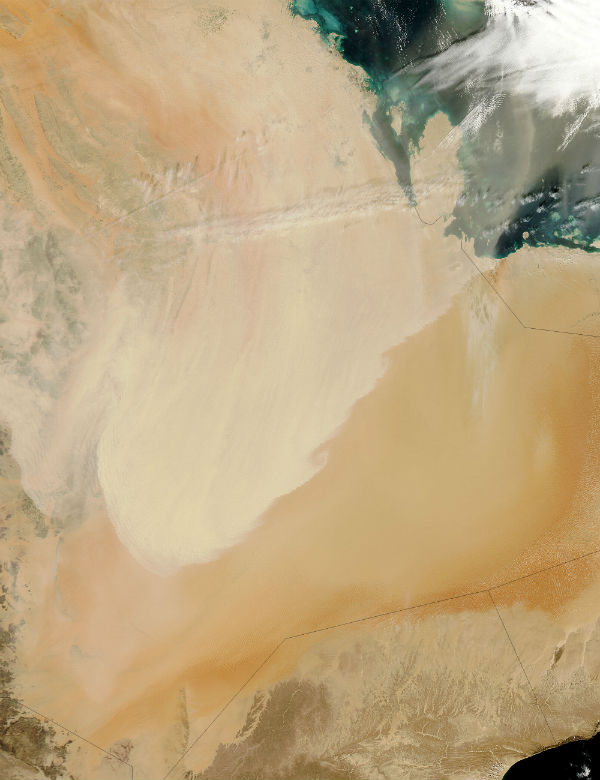 The desert is 1,000 kilometres (620 mi) long, and 500 kilometres (310 mi) wide. Its surface elevation varies from 800 metres (2,600 ft) in the southwest to around sea level in the northeast. <3 > The terrain is covered with sand dunes with heights up to 250 metres (820 ft), interspersed with gravel and gypsum plains.The sand is a reddish-orange color due to the presence of feldspar. There are also brackish salt flats in some areas, such as the Umm al Samim area on the desert’s eastern edge. The region is classified as “hyper-arid”, with typical annual rainfall of less than 35 millimetres (1.4 in). Daily maximum temperatures average at 47 °C (117 °F) during July and August and can reach temperatures as high as 51 °C (124 °F). 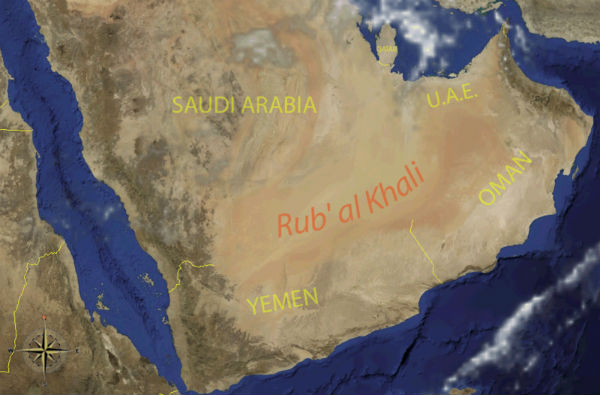 Geologically, the Empty Quarter is the second most oil-rich site in the world.Vast oil reserves have been discovered underneath the sand dunes. Sheyba, at the northeastern edge of the Rub’ al Khali, is a major Arab light crude oil-producing site in Saudi Arabia. Also, Ghawar, the largest oil field in the world, extends southward into the northernmost parts of the Empty Quarter.