A heavy veil of dust continued to veil central Asia

Moderate Resolution Imaging Spectroradiometer (MODIS) aboard NASA’s Terra satellite passed over the central Asia on October 6, 2011 and captured this true-color image bellow. Dust is especially heavy in the valleys and low lying areas, while the skies over the mountainous areas remain relatively clear. 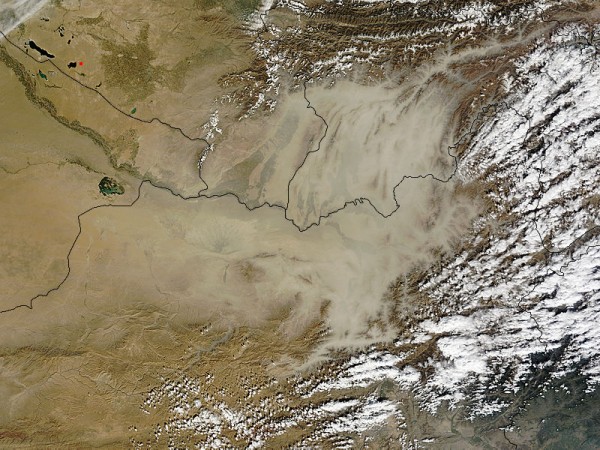 The storm began on October 5, and blew dust from northern Afghanistan hundreds of kilometers into neighboring countries. In this image, black borders have been added to delineate the borders of countries. Afghanistan covers the southern part of the image. Turkmenistan lies on the western (left) side, and borders Uzbekistan to the northeast. Due east of Uzbekistan, and in the upper right section of the image lies Tajikistan.

On October 5, the Central Asia Newswire reported that the Tajik capital of Dushanbe was swept by a ferocious dust storm, which caused cancellation of all arriving and departing flights to the city, and closure of the airport.

The clouds of dust were predicted to last until October 7, ending as a short rainstorm comes to the region. According to the state meteorology agency, a cold front coming into Dushanbe caused the dust storm. (MODIS)