A comet is diving into the sun today. Discovered on Sept. 29th by a group of four independent comet hunters (M. Kusiak, S. Liwo, B. Zhou and Z. Xu), the icy visitor from the outer solar system is evaporating furiously as it approaches the hot star. SOHO (the Solar and Heliospheric Observatory) is monitoring the death plunge. 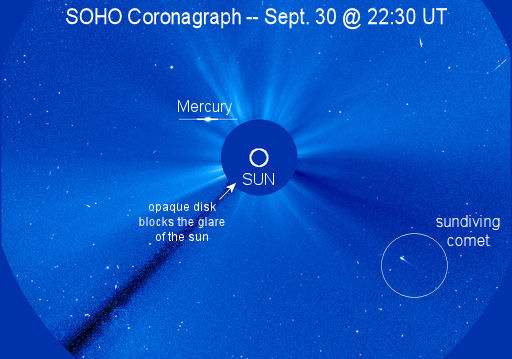 The doomed comet appears to be a member of the Kreutz family. Kreutz sungrazers are fragments from the breakup of a single giant comet many centuries ago. They get their name from 19th century German astronomer Heinrich Kreutz, who studied them in detail. Several Kreutz fragments pass by the sun and disintegrate every day. Most, measuring less than a few meters across, are too small to see, but occasionally a big fragment like this one attracts attention. (SpaceWeather)

Bright fireball lights up the sky over Ohio, U.S.

A brilliant fireball exploded over Ohio, U.S. at around 10:24 UTC (06:24 EDT) on September 30, 2020. The American Meteor Society (AMS) has so far received 701 reports about the meteor, which was observed in more than a dozen states. The event was primarily seen...

M6.0 earthquake hits near the coast of New Britain, P.N.G.

The fast-moving area of low pressure that will develop in the Atlantic Ocean through Thursday, October 1 has been named Alex by the French National Met Service - Meteo France. This is the first named storm of the 2020/21 European windstorm season (September 1, 2020...

An intense earthquake swarm started near Salton Sea, California on September 30, 2020, with 421 earthquakes detected by 07:00 UTC on October 1. The swarm is centered just southeast of Salton Sea, near Westmorland in Imperial Valley, in an area with a history of...

Ashfall produced by the eruption Ecuador's Sangay volcano continues to be registered in several areas of the country, with most affected the Andean province of Chimborazo. A total of 11 198 ha (27 670 acres) of crops have been destroyed in the provinces of...

The Aviation Color Code for Grímsvötn volcano was raised from Green to Yellow on September 30, 2020. The last eruption of this volcano took place in 2011 -- it was a large and powerful VEI 4 eruption. The average eruption frequency during the last 1 100...

A rare Earth-grazing meteoroid was spotted around 03:53 UTC on September 22, 2020 above northern Germany and the Netherlands, getting as low as 91 km (56 miles) above the surface -- which is far below any orbiting satellites - before bouncing back into space. The...

Extremely heavy rainfall hit the city of Rangpur, Bangladesh over the weekend, paralyzing normal life across the city and stranding more than 100 000 people. In just 12 hours, the city registered more rainfall than in the entire month of September (433 mm/17 inches...