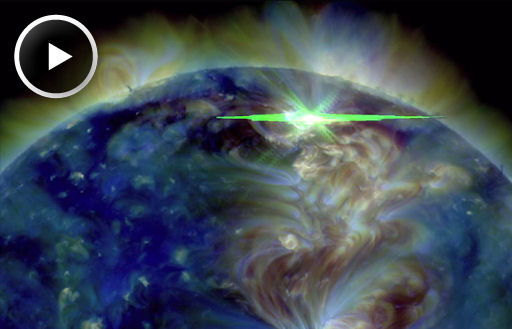 Sunspot 1302 is back at it again, this time producing an X1.9 Solar Flare at 09:40 UTC. This major event resulted in an R3 level radio blackout as well as producing a 10.7cm Radio Burst (TenFlare). A fast moving type II sweep frequency event is reported also. As this massive Sunspot continues to rotate into better position, the chances for an earth directed Coronal Mass Ejection (CME) will improve. This explosion did produce a CME, however it does not look to be very significant at this time.

Solar Update: Solar activity has been strong over the past 48 hours with numerous C-Class and M-Class flares as well as now two X-Class flares around Sunspot 1302. The chances for an Earth directed Coronal Mass Ejection are increasing

A couple of new Sunspots are forming on the visible solar disk and another mid sized spot is now rotating into view on the eastern limb behind 1302.More Flare activity will be possible within the next 24 hours. (SolarHam)

NOAA Region 1302 remains impressive and active as it continues its transit across the visible disc. As shown in the GOES X-ray plot below, 1302 produced an R3 (Strong) and multiple R2 (Moderate) flares today. Intermittent degradation to High Frequency communications occurs on the daylight side of the Earth during each respective flare. Also, the slow rise of energetic protons near Earth has flattened out and we are hovering right around the S1 threshold (NOAA Solar Radiation Storm Scales).

A fairly fast Coronal Mass Ejection (CME) associated with the long duration R2 flare is partially directed at Earth (long duration meaning long-lasting in time and wider in the graph below, as opposed to the impulsive flares that spike quickly). We won’t see the bulk of this CME, but a glancing blow is predicted for late eventing Eastern Time on the 25th (or right around the start of day GMT on the 26th). Geomagnetic Storm levels reaching the G1 (Minor) level are likely with isolated G2 (Moderate) possible, particularly at high latitudes. 1302 remains active so stay tuned for updates. (NOAA/SWPC)

HF Radio: Wide area blackout of HF radio communication, loss of radio contact for about an hour on sunlit side of Earth.

Navigation: Low-frequency navigation signals degraded for about an hour.

The movie also shows a shadowy shock wave racing away from the blast site. This is a sign that the blast produced a coronal mass ejection (CME). Analysts at the Goddard Space Weather Lab say the CME could deliver a glancing blow to Earth’s magnetic field on Sept. 26 at 14:10 UT (+/- 7 hours); click here for an animated forecast track.

Sunspot AR1302 followed today’s X2-flare with an M7-flare nearly as strong (movie). So far none of the blasts has been squarely Earth-directed, but this could change as the sunspot turns toward our planet in the days ahead. AR1302 is growing and shows no immediate signs of quieting down.

New sunspot 1302 has already produced two X-flares (X1.4 on Sept. 22nd and X1.9 on Sept. 24th). Each of the dark cores is larger than Earth, and the entire active region stretches more than 100,000 km from end to end. The sunspot’s magnetic field is crackling with sub-X-class flares that could grow into a larger eruption as the sunspot continues to turn toward Earth. (SpaceWeather) 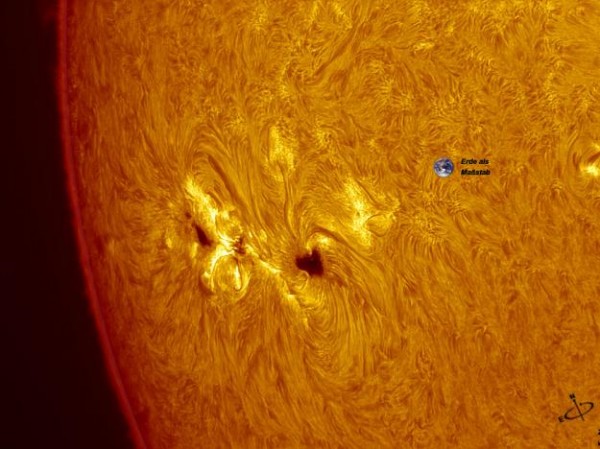 In addition to the M and X-Class activity around Sunspot 1302, Sunspot 1295 which is rotating onto the western limb is also producing M-Class activity. A new Sunspot that formed in the southern hemisphere also produced an M1 s/f at 21:30 UTC Saturday. Numerous Type II and Type IV Sweep frequency events are taking place as well as 10cm radio bursts (TenFlares). Continue to monitor the Solar X-Rays for further activity.

Another strong Solar Flare reaching M7.1 has taken place after the initial X-Class flare earlier today and was very long in duration. A bright Full-Halo CME is included with this event and a portion of this cloud may be earth directed.