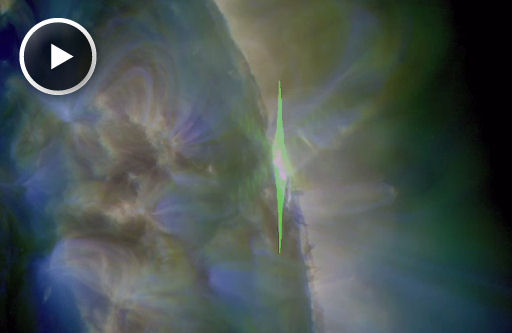 Although the blast site was not directly facing Earth, radiation from the explosion nevertheless ionized Earth’s upper atmosphere. This altered the propagation of radio signals around Europe, where it was high-noon at the time of the flare.

In addition to the UV flash, the explosion also hurled a CME into space: SOHO movie. The cloud is not heading for Earth, so no auroras will result from this particular event. (SpaceWeather)

A C8.3 Solar Flare took place near the western limb at 01:13 UTC Sunday morning. This was followed by a C9.0 Flare at 04:53 UTC and a stronger M3.2 at 11:45 UTC. All flares were centered around new Sunspot 1286. Because of its location, any further activity around this region may not be earth directed. Solar activity has increased with several C-Class flares and now one M-Class event. All flares appear to be around Sunspot 1286 which is rotating onto the western limb.

Sunspot 1283 continues to transit the northern hemisphere and remains a large Sunspot group. It does not appear to be magnetically complex however. (SolarHam) 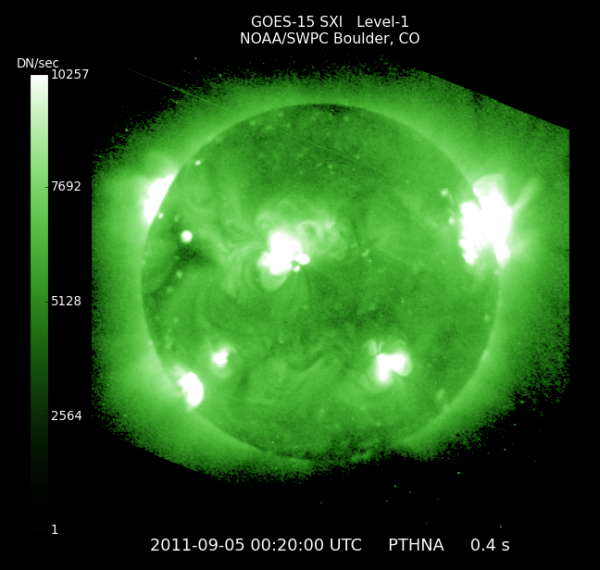 A plane-of-sky speed was estimated at about 150 km/s. Analysis of the potential geoeffectiveness of these CMEs is ongoing. Numerous C-class flares were also observed during the period from this area of the west limb. Region 1287 (S32E51) produced a C1 x-ray event early in the period at 03/2212Z. This region showed minor growth in area while the remaining regions on the disk indicated a slight decay in area coupled with loss of spots.

Solar activity is expected to be low for the next three days (05 – 07 September). A chance for additional M-class activity exists through 06 September.

The geomagnetic field was at quiet to unsettled levels. Observations from the ACE spacecraft indicated wind speeds varied predominately
between 350 to 400 km/s. The Bz component of the interplanetary magnetic field did not vary much beyond +/- 5 nT during the period.