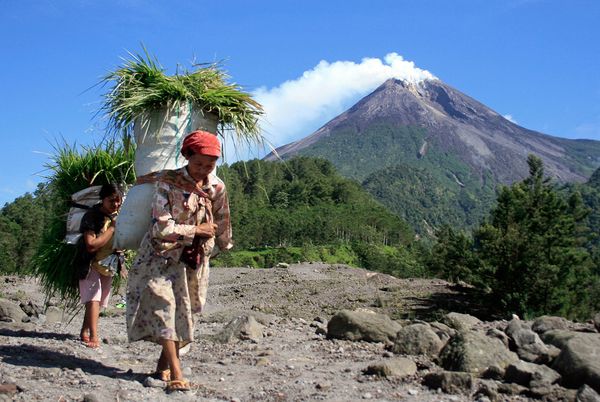 Eighteen Indonesian volcanoes are on “alert” status, two of which are at Alert Level 3, which is called “Siaga”, the Volcanology and Geology Disaster Mitigation Center says. Center head Surono said Sunday in Jakarta the erupting Mount Lokon in North Sulawesi and Mount Ibu in North Maluku were the two volcanoes at Siaga status.

Conditions at Mt Lokon and Mt Ibu were currently considered most worrisome because they had been consistently erupting searing clouds affecting a radius of 2.5 kilometers. Eruptions had not yet endangered people living around the volcanoes. The eruptions are heading west, while people are concentrated in east.

16 other volcanoes were at Level 2 alert status, “Waspada”, including Mt. Papandayan and Mt. Guntur in West Java. Locals have reported several quakes.

Surono said that President Susilo Bambang Yudhoyono had summoned him on Saturday to report the volcanoes’ status and the center’s preparations to anticipate possible disasters. He said ideally there should be an expert monitoring the activities of each volcano in Indonesia, as is the case in Japan. “Currently an expert handles five mountains.” (JakartaPost) 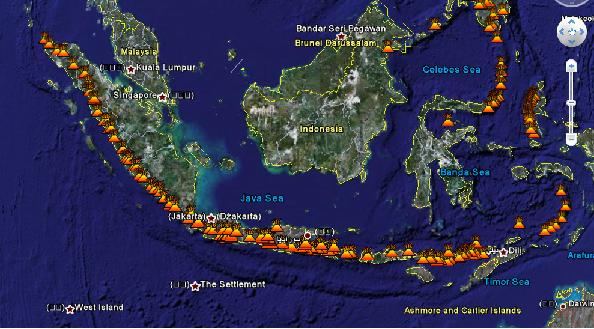 The islands of Indonesia are among the newer pieces of real estate on the globe. They were formed only about fifteen million years ago., as a result of shifts of land under the ocean and volcanic eruptions.

Indonesia has some 155 centres of active volcanism. Java and Bali are the most volcanically active islands in the world with 20 of their volcanoes having been active in historical times.

In addition, 13 older volcanoes have active solfatara (vents emitting hydrogen sulphide and other sulphurus gases) and fumaroles (vents emitting high pressure steam and other gases. Some peaks such as Semuru, Merapi Agung, and Ciremai have classic shapes, and some, such as Tengger and Batur, have dramatic calderas where the peak has been blown off leaving a plain or a lake with smaller peaks within.

The Batur complex has been described as one of the world’s largest and finest caldera. Volcanoes have played a crucial role in the geological and human history of Indonesia. Their impact has been positive because they create land through lava flows, ash deposits, and mud flows, forming thick layers of fertile sediment. But at the same time they have hurt, when they occured. 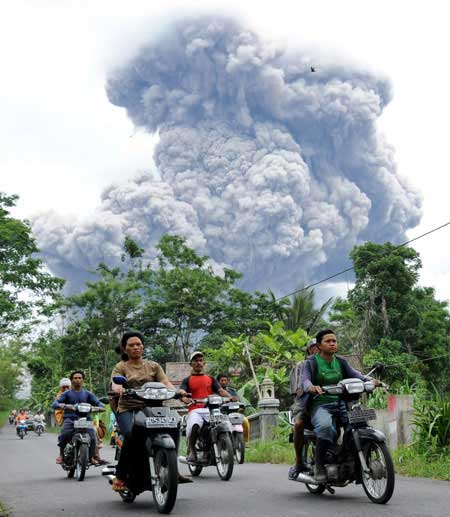 The frequent geological activity is generating deadly events. Earthquakes are by far the cause of most of the causalties, either directly or indirectly with the tsunamis. Recently, every body will remember the tsunami of December 2004, where 80,000 Indonesian of Sumatra, in the Aceh province, were found dead. But we can find in the archives of the volcanology that among the largest known events were the eruption of Mount Tambora and the Krakatoa (or Krakatau).

In 1883 an eruption of Mount Krakatoa (sometimes spelled Krakatau) with a force greater than that of several hydrogen bombs caused tidal wave (tsunami) that submerged the coast of the island of Java, killing thirty-six thousand people. The eruption destroyed most of the existing islandsof the Krakatao surrounds. Then new eruptions at the volcano since 1927 have built a new island, called the child of Krakatao, Anak Krakatau.

Of the 130 active volcanoes in Indonesia, Merapi is the most active, and has had at least twelve eruptions that killed people. The name Merapi means “Mountain of Fire”. The volcano is considered sacred and every year a priest climbs to the top to make an offering. High 2968 meters, it is located 25 km north of Yogyakarta. The mountain erupts about once every 5.5 years and has killed as many as 1,600 people in 26 eruptions since 1930. 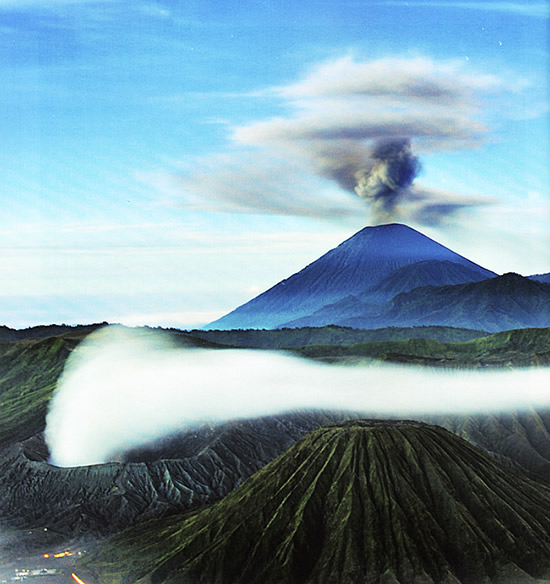