Drought has plunged East Africa into the worst food security crisis Africa has faced in 20 years. More than 11.5 million people are currently in need of food aid in Djibouti, Kenya, Somalia, and Ethiopia. The number is projected to rise, and this image illustrates why.

The image shows plant growth during the growing season for the crop normally harvested in June and July. The image was made with observations from the Advanced Very High Resolution Radiometer (AVHRR) on the NOAA-18 POES satellite, which records the amount of light plants in a broad region absorb during photosynthesis. Where there were more leafy photosynthesizing plants than average, the image is green. Brown indicates that plants were sparser or growing less than average. Broad swaths of East Africa are brown, pointing to poor plant growth during the growing season.

The crop grown during this period is typically planted in March or April, when the first rains of the year fall. In 2011, the rains were late, falling in late April and May, and inadequate. The crops were planted late and are only now being harvested. In southern Somalia, currently the most severely impacted region, the harvest is expected to be 50 percent below average, says the Famine Early Warning Systems Network (FEWS NET). Pastures are also sparse, putting stress on livestock. 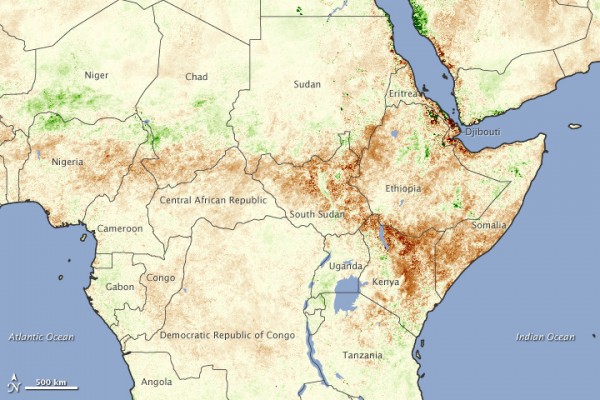 The poor harvest and lack of pasture in July compounds existing food security problems. The previous crop,harvested early in the year, was also poor. In Somalia, the harvest was less than 20 percent of the average harvest, and people began to run short on food in April. Another bad harvest reduces food availability even more, which means that food prices will likely rise more in the coming months.

On July 20, the United Nations declared a famine in parts of southern Somalia, where 2.8 million people are in need of life-saving assistance. Surrounding regions in Somalia, Ethiopia, Kenya, and Djibouti are in a food crisis or food emergency. The United Nations declares a famine only when “at least 20 per cent of households in an area face extreme food shortages with a limited ability to cope; acute malnutrition rates exceed 30 per cent; and the death rate exceeds two persons per day per 10,000 persons.”

Over the past three months, tens of thousands of people have died in Somalia, and, as the image shows, the current harvest is unlikely to bring relief. Based partly on satellite images like this one, FEWS NET predicts that famine conditions will spread across all of southern Somalia in the next month or two.

The food security crisis is the worst since 1991-92, says FEWS NET. The drought behind the crisis is the worst in the region in the last 60 years, with some areas experiencing one of the driest years on record. The drought is tied to the strong La Niña conditions that prevailed in late 2010 and early 2011. La Niña shifts ocean temperatures and air pressure over the Pacific Ocean, and its effects ripple through weather patterns around the world. In East Africa, La Niña causes drought. La Niña conditions have ended, and FEWS NET predicts normal rains for East Africa later in the year, though it will take far longer for the region to recover. (EarthObservatory)

The United Nations declared that famine exists in two regions of southern Somalia: southern Bakool and Lower Shabelle. Across the country, nearly half of the Somali population – 3.7 million people – are now in crisis, of whom an estimated 2.8 million people are in the south.

Consecutive droughts have affected the country in the last few years while the ongoing conflict has made it extremely difficult for agencies to operate and access communities in the south of the country.

Famine is declared when acute malnutrition rates among children exceed 30 per cent; more than 2 people per 10,000 die per day; and people are not able to access food and other basic necessities. Malnutrition rates are currently the highest in the world, with peaks of 50 per cent in certain areas of southern Somalia. In southern Bakool and Lower Shabelle, acute malnutrition rates exceed 30 percent, with under‐five deaths exceeding 6 per 10,000 per day in some areas. In the last few months, tens of thousands of Somalis have died as a result of causes related to malnutrition, the majority of whom were children.

Meanwhile, the lack of resources is alarming.  While UN humanitarian agencies have welcomed the recent statement by Al Shabaab requesting international assistance in southern Somalia, the inability of food agencies to work in the region since early 2010 has prevented the UN from reaching the very hungry – especially children – and has contributed to the current crisis.

Despite challenges, humanitarian agencies are working hard to respond. In an effort to reach more children with life‐saving interventions, the UN and its partners have scaled up emergency nutrition, water and sanitation, and immunization efforts to combat malnutrition and reduce disease. To expedite the delivery of supplies into the worst‐affected areas, the UN has started airlifting urgently needed medical, nutrition and water supplies.

The most affected areas of Somalia are in the south, particularly the region of Lower Shabelle, Middle and Lower Juba, Bay, Bakool, Benadir, Gedo and Hiraan, which host an estimated 310,000 acutely malnourished children.

Nearly half of the population in Somalia is facing a humanitarian crisis and is in urgent need of assistance. The number of people in crisis has increased by over one million in the last six months. Over 166,000 Somalis have fled the country to seek assistance and refuge in neighbouring countries since the start of the year, with over 100,000 of those fleeing since May. So far in July alone, almost 40,000 new Somali arrivals have been registered in refugee camps in the region. (ReliefWeb)

Famine in Southern Somalia - Evidence for a declaration (FEWS Net)