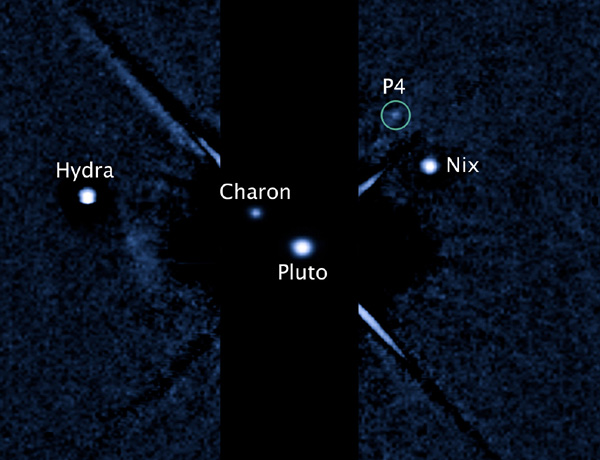 Five years after Pluto was stripped of its planet status, astronomers have discovered yet another moon in orbit around it, bringing its entourage to four. The tiny body may have been born in the same collision that gave birth to Pluto's other moons. 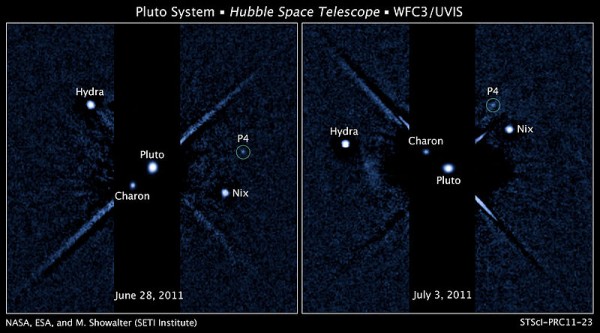 The Hubble Space Telescope spotted the new moon, which has been designated P4 for the time being. Astronomers estimate it is between 13 and 34 kilometres across. Three other moons of Pluto were already known. Pluto is surrounded by a large moon, Charon, which at 1200 kilometres wide is about half the planet's diameter. In 2005, astronomers using Hubble discovered Pluto is also orbited by two tiny moons – dubbed S/2005 P1 and S/2005 P2.

These moons  orbit Pluto every 38 days and 25 days, respectively. Nix and Hydra, discovered in Hubble images in 2005, are tiny by comparison: both are estimated to be between 32 and 113 kilometres in diameter. All four moons are thought to have formed at the same time.

The New Horizons mission is scheduled to fly by Pluto in 2015. 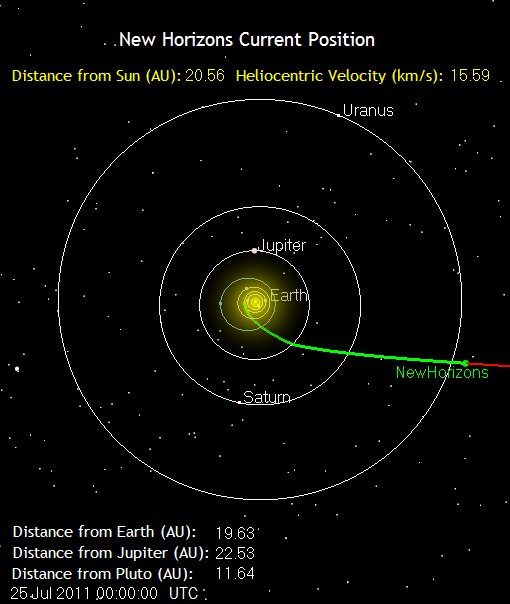 In 2006, NASA dispatched an ambassador to the planetary frontier. The New Horizons spacecraft is now halfway between Earth and Pluto, on approach for a dramatic flight past the icy planet and its moons in July 2015.  After 10 years and more than 3 billion miles, on a historic voyage that has already taken it over the storms and around the moons of Jupiter, New Horizons will shed light on new kinds of worlds we've only just discovered on the outskirts of the solar system.

Pluto gets closer by the day, and New Horizons continues into rare territory, as just the fifth probe to traverse interplanetary space so far from the Sun. And the first to travel so far, to reach a new planet for exploration. (NASA) 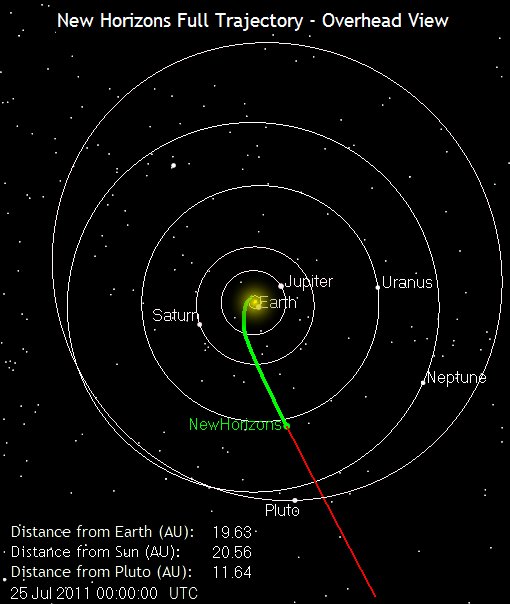 Pluto orbits beyond the orbit of Neptune (usually). It is much smaller than any of the official planets and now classified as a "dwarf planet". Pluto was discovered in 1930 by a fortunate accident. Calculations which later turned out to be in error had predicted a planet beyond Neptune, based on the motions of Uranus and Neptune. Not knowing of the error, Clyde W. Tombaugh at Lowell Observatory in Arizona did a very careful sky survey which turned up Pluto anyway.

Pluto, formal designation 134340 Pluto, is the second most massive known dwarf planet in the Solar System (after Eris) and the tenth most massive body observed directly orbiting the Sun. Originally classified as the ninth planet from the Sun, Pluto was recategorized due to recent discoveries and is now considered the largest dwarf planet within the newly charted Kuiper belt.  Pluto is smaller than seven of the solar system's moons (the Moon, Io, Europa, Ganymede, Callisto, Titan and Triton).

Like other members of the Kuiper belt, Pluto is composed primarily of rock and ice and is relatively small: approximately a fifth the mass of the Earth's Moon and a third its volume. It has an eccentric and highly inclined orbit that takes it from 30 to 49 AU (4.4–7.4 billion km) from the Sun. This causes Pluto to periodically come closer to the Sun than Neptune. As of 2011, it is 32.1 AU from the Sun.