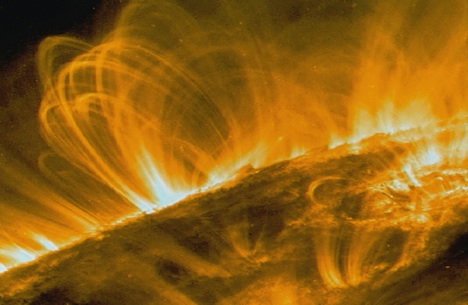 The scientific process, as any experienced researcher can attest, provides a kind of road map through the forest of the natural world. By developing hypotheses and designing methods by which to test them, we use the scientific process to make the abstract world more concrete.

Once we clarify our questions about matter, time, and reality, we can move forward from one conclusion to another in a logical attempt to answer them. But the path in front of us often extends into kind of fog, a compounding cloud of questions, with each conclusion often leading only to additional questions that multiply indefinitely.

And the path behind us can be equally shrouded. Sometimes generations of observations about the natural world can later be determined to have been founded on evidence that was circumstantial, inconclusive or simply incorrect.

Just to keep us from becoming complacent, an additional complication to our methods, sometimes arises as well. Sometimes we discover a seemingly immutable truth about the natural world and build additional truths and additional studies upon that knowledge, only to realize later that our original discoveries may have actually changed.

This is the situation that faces researchers from Purdue and Stanford Universities as they try to draw conclusions from what appears to be a fundamental change in the nature of radioactive decay.

As long as we’ve had the periodic table, we’ve known that elemental particles often experience a process of decay on an atomic level, a form of disintegration from complex to simpler and more stable states.

We’ve used this information to gain additional information about the world, and we’ve applied it to a wide variety of practical problems. This knowledge forms the foundation of how we calculate the radiation treatments applied to cancer patients, for example.

It also provides the calculations we use to estimate the age of organic matter, a process called radio carbon dating. Carbon-14, one of the building blocks of life on earth, has a radioactive half-life of 5,730 years. This means that after 5,730 years, half of a given sample of Carbon-14 will have decayed into a more stable state and become Nitrogen-14.

But what if our conclusions about radioactive decay have been incorrect? Or, as researchers are now proposing, what if the nature of radioactive decay has changed? If this turns out to be true, then how and why is it happening? And what does it mean for the future of life on earth?

Researchers at Purdue first noticed a curious circumstance when they began using radioactive decay rates to design a random number generator, since decay events occur in an entirely random and unbiased way.

But when researchers compared their numbers with those recorded in other labs, they found that the decay rates, which should have been constant, were not the same. They appeared to vary in a predictable way which correlated with the fluctuations of the seasons. Radioactive decays rates seemed to decrease during the summer season and increase during the winter.

The strange possibility that the sun might be affecting radioactive decay rates was cause enough for curiosity. But the possibility of an explanation linked to the sun drew additional scrutiny after a discovery by Purdue nuclear engineer Jere Jenkins in 2006. Jenkins noticed an inexplicable drop in the radioactive decay rate of manganese-54, and a day later a large flare erupted on the solar surface.

The link between sun activity and radioactive decay rates still seemed very circumstantial. But at the very least, the connection suggested by Jere’s observation provided enough evidence to warrant further research. As this research progressed, a pattern eventually emerged that did indeed show a regular repeating fluctuation in radioactive decay rates which appeared to occur every 33 days.

Researchers at Purdue and the U.S. National institute of Standards and Technology are beginning to rule out neutrinos as the culprits in this mystery.

Two known facts about neutrinos affect their standing as a possible cause of the decay fluctuations. First, neutrinos are magnificently small, stable and disinclined to interact with other particles. This gives them ghost-like qualities and allows them to move directly through the Earth and emerge on the other side unaffected.

Such a solitary particle seems unlikely to have a powerful effect on radioactive decay rates, especially such a measurable effect. Second, radioactive gold-198 appears to release neutrinos as it decays. Scientists looking for connections between solar cycles and apparent changes in the decay rates of gold-198 have drawn no valuable conclusions that suggest neutrino release rates from gold-198 are affected by solar conditions.

This mystery remains unsolved. But a sense of urgency is building behind efforts to find out why one of our fundamental assumptions about particle physics may be unraveling before our eyes.

Attention is now turning to the possibility of a new particle, as yet unidentified and unnamed, that may be emerging from the core of the sun and affecting the rate of radioactive decay among elements here on earth.

Could these effects actually be caused by a new particle? Or perhaps a particle that’s been moving among us for millions of years undetected? And if so, why are these fluctuations in decay rates appearing now for the first time?

The new developments that may emerge from this situation, whatever they may be, will affect the core building blocks of all life on our planet. And they may require us to reevaluate everything we think we know about the relationship between the sun and the earth.