For the first time, a science experiment has measured Earth's ability to absorb neutrinos – the smaller-than-an-atom particles that zoom throughout space and through us by the trillions every second at nearly the speed of light. The experiment was achieved with the IceCube detector, an array of 5160 basketball-sized sensors frozen deep within a cubic kilometer of very clear ice near the South Pole.

"This achievement is important because it shows, for the first time, that very-high-energy neutrinos can be absorbed by something – in this case, the Earth," said Doug Cowen, professor of physics and astronomy & astrophysics at Penn State. The first detections of extremely-high-energy neutrinos were made by IceCube in 2013, but a mystery remained about whether any kind of matter could truly stop a neutrino's journey through space.

The results in the Nature paper are based on one year of data from about 10 800 neutrino-related interactions. Cowen and Tyler Anderson, an assistant research professor of physics at Penn State, are members of the IceCube collaboration. They are coauthors of the Nature paper who helped to build the IceCube detector and are contributing to its maintenance and management.

This new discovery with IceCube is an exciting addition to our deepening understanding of how the universe works. It also is a little bit of a disappointment for those who hope for an experiment that will reveal something that cannot be explained by the current Standard Model of Particle Physics. "The results of this Ice Cube study are fully consistent with the Standard Model of Particle Physics – the reigning theory that for the past half century has described all the physical forces in the universe except gravity," Cowen said.

Neutrinos first were formed at the beginning of the universe, and they continue to be produced by stars throughout space and by nuclear reactors on Earth. "Understanding how neutrinos interact is key to the operation of IceCube," explained Francis Halzen, principal investigator for the IceCube Neutrino Observatory and a University of Wisconsin-Madison professor of physics. "We were, of course, hoping for some new physics to appear, but we, unfortunately, find that the Standard Model, as usual, withstands the test," Halzen said. 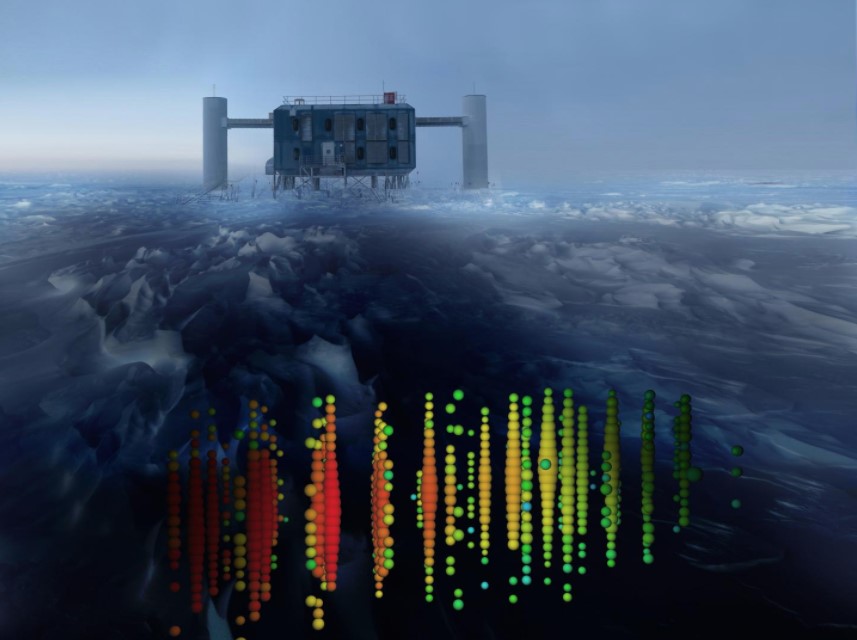 This image shows a visual representation of one of the highest-energy neutrino detections superimposed on a view of the IceCube Lab at the South Pole. Credit: IceCube Collaboration

IceCube's sensors do not directly observe neutrinos, but instead measure flashes of blue light, known as Cherenkov radiation, emitted after a series of interactions involving fast-moving charged particles that are created when neutrinos interact with the ice. By measuring the light patterns from these interactions in or near the detector array, IceCube can estimate the neutrinos' energies and directions of travel. The scientists found that the neutrinos that had to travel the farthest through Earth were less likely to reach the detector.

Most of the neutrinos selected for this study were more than a million times more energetic than the neutrinos produced by more familiar sources, like the Sun or nuclear power plants. The analysis also included a small number of astrophysical neutrinos, which are produced outside the Earth's atmosphere, from cosmic accelerators unidentified to date, perhaps associated with supermassive black holes.

"Neutrinos have quite a well-earned reputation of surprising us with their behavior," says Darren Grant, spokesperson for the IceCube Collaboration, a professor of physics at the University of Alberta in Canada, and a former postdoctoral scholar at Penn State. "It is incredibly exciting to see this first measurement and the potential it holds for future precision tests."

In addition to providing the first measurement of the Earth's absorption of neutrinos, the analysis shows that IceCube's scientific reach extends beyond its core focus on particle physics discoveries and the emerging field of neutrino astronomy into the fields of planetary science and nuclear physics. This analysis also is of interest to geophysicists who would like to use neutrinos to image the Earth's interior in order to explore the boundary between the Earth's inner solid core and its liquid outer core.

"IceCube was built to both explore the frontiers of physics and, in doing so, possibly challenge existing perceptions of the nature of universe. This new finding and others yet to come are in that spirt of scientific discovery," said James Whitmore, program director in the National Science Foundation's physics division.

Physicists now hope to repeat the study using an expanded, multiyear analysis of data from the full 86-string IceCube array, and to look at higher ranges of neutrino energies for any hints of new physics beyond the Standard Model.

Featured image shows a visual representation of one of the highest-energy neutrino detections superimposed on a view of the IceCube Lab at the South Pole. Credit: IceCube Collaboration