An international team of researchers reconstructed the Sun's 11-year cycles all the way back to year 969 using measurements of radioactive carbon in tree rings. The findings help scientists better understand the dynamics of the Sun, enabling more accurate dating of organic materials using the C14 method.

The development of solar activity before the dawn of systematic records has so far been difficult to reconstruct, so a team of international researchers led by Hans-Arno Synal and Lukas Wacker of the Laboratory of Ion Beam Physics at ETH– which included the Max Planck Institute for Solar System Research in Gottingen and Lund University in Sweden, has reconstructed the Sun's 11-year cycle back to 969 A.D. using measurements of the concentration of radioactive carbon found in tree rings.

The researchers have also created an important database for more precise age-dating using the C14 method.

To reconstruct the Sun's activity over a millennium, the scientists used tree-ring archives from England and Switzerland. A tiny fraction of radioactive carbon C14 can be found in those rings, with only one out of every 1 000 billion atoms being radioactive.

From the half-life of the isotope of about 5 700 years, researchers can conclude the concentration of radioactive carbon present in the atmosphere when the growth ring was formed.

Since radioactive carbon is mainly produced by space particles, the more active the Sun, the better it protects the Earth. From here, it is possible to deduce solar activity from a chance in the concentration of C14 in the atmosphere.

Radioactive decay events of C14 in a sample are counted directly using a Geiger counter, which needs a relatively huge amount of material.

"Using modern accelerator mass spectrometry we were now able to measure the C14 concentration to within 0.1 percent in just a few hours with tree-ring samples that were a thousand times smaller," said Ph.D. student and author Nicolas Brehm, who was responsible for the analyses.

In accelerator mass spectrometry, C14 and C12 atoms of the tree material are electrically charged first, and then accelerated by an electric potential of several thousand volts, after which they are sent through a magnetic field.

The two carbon isotopes, which have varying masses, are deflected to different degrees to be counted separately. To acquire the information on solar activity from the raw data, the researchers performed statistical analyses and further process the results.

The method allowed the researchers to reconstruct the solar activity from 969 to 193. From the reconstruction, the team concluded the regularity of the 11-year cycle and the fact that the amplitude of that cycle is smaller during long-lasting solar minima. These findings are significant for a better understanding of the Sun's internal dynamics.

The results also enabled the confirmation of the solar energetic proton event of 993.

In such an event, highly-accelerated protons that reach the Earth cause a slight overproduction of C14.

The team found as well pieces of evidence of two unknown events in 1052 and 1279, indicating that such events happen more frequently than previously believed. 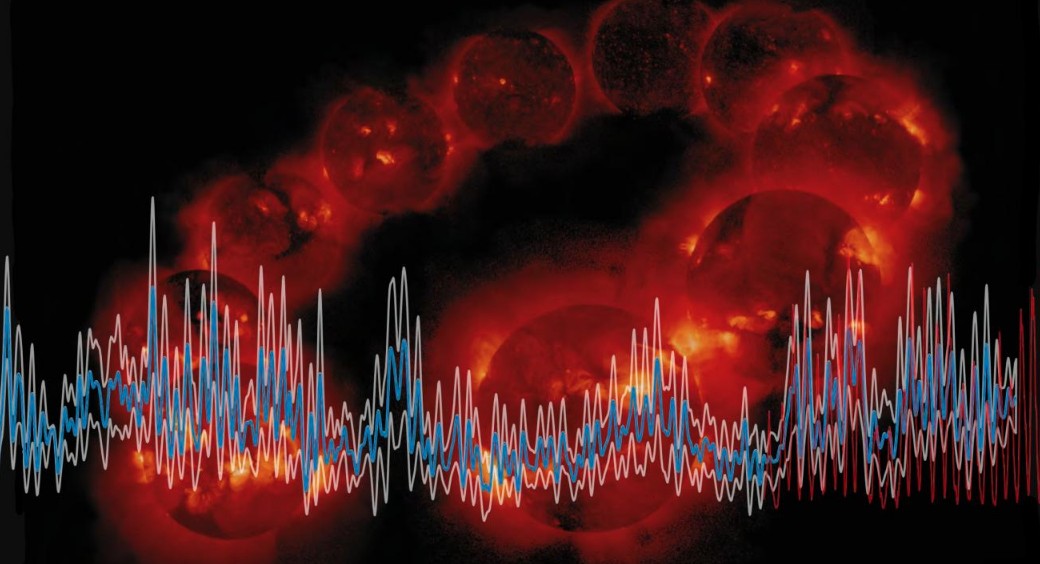 The Sun provides the principal energy input into the Earth system and solar variability represents a significant external climate forcing. Although observations of solar activity (sunspots) cover only the last about 400 years, radionuclides produced by cosmic rays and stored in tree rings or ice cores serve as proxies for solar activity extending back thousands of years. However, the presence of weather-induced noise or low temporal resolution of long, precisely dated records hampers cosmogenic nuclide-based studies of short-term solar variability such as the 11-yr Schwabe cycle. Here we present a continuous, annually resolved atmospheric 14C concentration (fractionation-corrected ratio of 14CO2 to CO2) record reconstructed from absolutely dated tree rings covering nearly all of the last millennium (AD 969–1933). The high-resolution and precision 14C record reveals the presence of the Schwabe cycle over the entire time range. The record confirms the AD 993 solar energetic particle event and reveals two new candidates (AD 1052 and AD 1279), indicating that strong solar events that might be harmful to modern electronic systems probably occur more frequently than previously thought. In addition to showing decadal-scale solar variability over the last millennium, the high-temporal-resolution record of atmospheric radiocarbon also provides a useful benchmark for making radiocarbon dating more accurate over this interval.