Tropical storm Dora, the fourth named storm of the Pacific hurricane season, strengthened off the coast of Central America on Monday. The storm, with winds of about 95 kph, could reach hurricane strength on Tuesday but is not forecast to make a direct hit on land and there are no coastal warnings in effect, the U.S. National Hurricane Center said.

Dora is located south of Guatemala and southern Mexico and is moving up the Pacific coastline. The NHC said swells caused by Dora would probably begin affecting the coast of southern Mexico on Tuesday. Heavy rains have already drenched Central America this year, putting the vulnerable countries at risk of floods and landslides that could also affect export crops. Two people died and three are missing in Guatemala due to rains last week.

As a result of the power of Dora's increasing winds, large ocean swells are expected to begin affecting the southern coast of mainland Mexico today. These swells are likely to cause life-threatening surf and rip current conditions.The Mexican Weather Service has posted weather warnings for the Mexican states of Chiapas, Oaxaca and Guerrero. Residents in those states can expect heavy rains, gusty winds, and some local flooding. According to weather reports from the National Oceanic and Atmospheric Administration, Oaxaca was already reporting rain at 9 a.m. EDT on July 19. Winds were from the east-northeast near 5 mph (4 knots) and it was 62 degrees Fahrenheit (17C). For weather advisories in Spanish from the Mexican Weather Service, go to: http://smn.cna.gob.mx/. 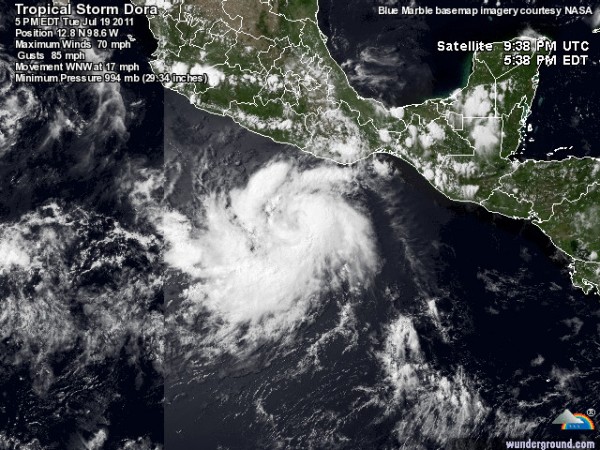 549 cities under state of emergency due to severe floods, Brazil

More than 549 cities in Brazil are now under a state of emergency due to severe floods affecting the country over the past couple of weeks. Dozens of people have been killed and more than 133 000 forced to evacuate their homes. In addition, 200 cities in the state...

The City and Borough of Yakutat in Alaska, U.S. has declared a local disaster emergency on January 11, 2022, after accumulating approximately 1.5 - 1.8 m (5 - 6 feet) of snow over the last several weeks. Yakutat is isolated and off the road system, and all local...

China is stockpiling food at historically high levels and now has more than half of the world's maize and other grains. By mid-2022, the country is estimated to hold 69% of the world’s corn reserves, 60% of rice, and 51% of wheat. At the end of 2021,...

A strong, quick-hitting winter storm is expected to bring heavy snow and gusty winds to the Northern Plains into the Upper and Mid-Mississippi Valley, U.S. that may cause some hazardous travel beginning Thursday night, January 13, 2022, through Friday night. The...

Sequence of tectonic earthquakes under the summit of Ruapehu volcano, New Zealand

Tectonic earthquakes are being registered beneath the summit area of Ruapehu volcano in New Zealand since December 30, 2021. While these earthquakes are uncommon, none of the monitoring data suggests that the volcano is exhibiting increased levels of activity....