Astronomers have spied a star’s swan song as it is shredded by a black hole. Researchers suspect that the star wandered too close to the black hole and got sucked in by the huge gravitational forces. The star’s final moments sent a flash of radiation hurtling towards Earth.

The energy burst is still visible by telescope more than two-and-a-half months later, the researchers report in the journal Science. The Swift spacecraft constantly scans the skies for bursts of radiation, notifying astronomers when it locates a potential flare. These bursts usually indicate the implosion of an ageing star, which produces a single, quick blast of energy. But this event, first spotted on 28 March 2011 and designated Sw 1644+57, does not have the marks of an imploding sun. What intrigued the researchers about this gamma ray burst is that it flared up four times over a period of four hours.

Astrophysicist Dr Andrew Levan from the University of Warwick, and his colleagues suspected that they were looking at a very different sort of galactic event; one where a passing star got sucked into a black hole. The energy bursts matched nicely with what you might expect when you “throw a star into a black hole“, told Dr. Levan. 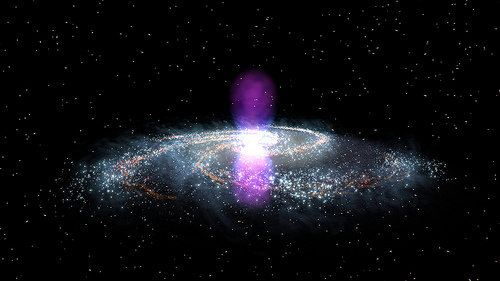 Black holes are thought to reside at the centres of most major galaxies. Some black holes are surrounded by matter in the form of gas; light is emitted when the gas is dragged into the hole. However, the centres of most galaxies are devoid of gas and so are invisible from Earth. These black holes only become visible when an object such as a star is pulled in. If this happens, the star becomes elongated, first spreading out to form a “banana shape” before its inner edge – orbiting faster than the outer edge – pulls the star into a disc-shape that wraps itself around the hole. As material drops into the black hole it becomes compressed and releases radiation that is usually visible from Earth for a month or so.

Events like these, termed mini-quasars, are incredibly rare – researchers expect one every hundred million years in any one galaxy. The researchers used some of most powerful ground-based and space-based observatories – the Hubble Space Telescope, the Chandra X-ray Observatory and the Gemini and Keck Telescopes.(BBC) 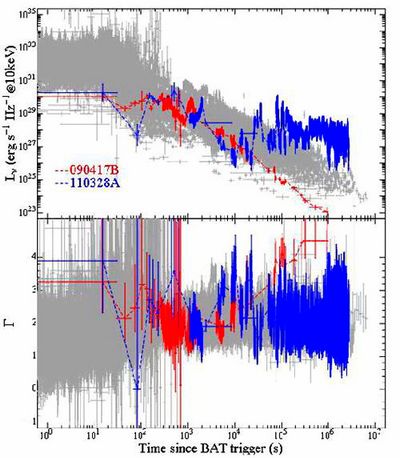 Sw 1644+57/GRB 110328A was discovered by the Swift satellite at 2011 March 28 12:57:45 UT. It is coincident with an optical source at redshift z=0.353. The isotropic energy of total X-ray and gamma-ray is ~1E53 erg and the luminosity of the flaring X-ray afterglow is ~1E46-1E48 erg/s, both comparable to regular Gamma-Ray Bursts (GRBs) and establishing its initial name, GRB 110328A. However, the source was detectable and variable in Burst Alert Telescope (BAT) more than 40 hours after the initial trigger (BAT re-triggered for quite a few times), with peak brightness in the order of 200 mCrab. Moreover the flaring X-ray plateau held up to >40 days. These features are rather peculiar and have not been reported in any GRBs before, rendering Sw 1644+57 one of the most exciting astrophysical discoveries made in 2011 (see also http://www.nasa.gov/topics/universe/features/star-disintegration.html).

Dr. SHAO Lang and ZHANG Fuwen, together with Prof. FAN Yizhong and WEI Daming carried out a timely research on this remarkable cosmological X-ray outburst. They found out that the early-time (<0.1 day since the trigger) X-ray emission of Sw 1644+57 resembles some gamma-ray bursts, say, GRB 090417B. But the late-time flaring X-ray plateau lasting >40 days makes it unique (see Fig.1).

They examined the possibilities that the outburst is a super-long GRB powered either by the fallback accretion onto a nascent black hole or by a millisecond pulsar, and found out that these two scenarios can address some but not all of the main observational features. They then focused on the model of tidal disruption of a (giant) star by a super-massive black hole, in which some tidal-disrupted material forms a well-extended accretion-disk surrounding the central black hole and energetic X-ray bursts are produced in the accretion process. The mass of the tidal-disrupted star was estimated to be > a few solar masses and a simple/straightforward argument for a magnetic origin of the relativistic outflow had been presented.

The central super-massive black hole likely has a mass ~1E6 solar masses while GRB 090417B-like events plausibly have a typical mass > a few – tens solar masses. The similarity between the early (t<0.1 day) X-ray emission of Sw 1644+57 and that of GRB 090417B strongly suggests that very different central engines can produce rather similar X-ray outbursts in a selected time interval, possibly via the same kind of initial energy-extraction and late-time-energy-dissipation processes.