Japan’s 11 March mega-quake shifted the ocean floor sideways by more than 20m (65ft), according one instrument placed on the seabed off the nation’s coast. This direct measurement exceeds the displacement suggested by some models built only from data gathered on land.

The figure was recorded by the Japan Coast Guard which maintains underwater geodetic equipment along the fault responsible for the giant tremor. An upwards movement of 3m (10ft) was registered by the same instrument. The data underlines once again the colossal nature of the Magnitude 9.0 quake and its associated tsunami.

The scale is almost double that estimated only from the terrestrial data. Results show how important offshore data are to know where and to what extent the rupture occurred on the plate boundary.

The 11 March event occurred close to the Japan Trench, the tectonic plate boundary where the dense rock of the Pacific Ocean floor is being pulled down (subducted) underneath Japan as it moves westwards towards Eurasia. The quake occurred well out to sea – some 130km from the city of Sendai in the Miyagi Prefecture; but at a relatively shallow depth under the seabed – just 32km. Data from arrays of GPS stations on land recorded a lurch in a south-easterly direction as a result of the quake, and this information has been used to estimate what would be an even larger horizontal movement of the ocean floor right above the site of the rupture.

But Japan’s Coast Guard was able to recover more direct evidence by measuring the positions of five installations on the seabed. One of these instruments – fortuitously as it turned out – was sitting almost on top of the epicentre when the quake struck. 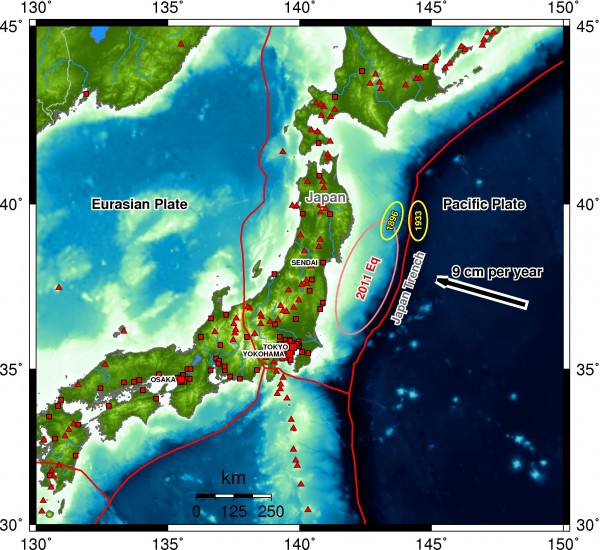 Scientists measured the position of a survey vessel by using the satellite (GPS) signal, and then measure the position of the seafloor instrument from the survey vessel by using acoustic waves. They repeated these observations – and comparing the positions of the seafloor instruments before and after the earthquake, they got the displacements. The instruments were set up 10 years ago, but their precise positions were assessed only last September. A cruise to conduct the post-quake reassessment occurred at the end of March, beginning of April.

The network reveals horizontal movement of 5m to 24m in an east-southeast direction, and a vertical displacement range of minus 0.8m (subsidence) to 3m (uplift). A station known as MYGI, which was closest to the quake’s epicentre, recorded the 24m figure. 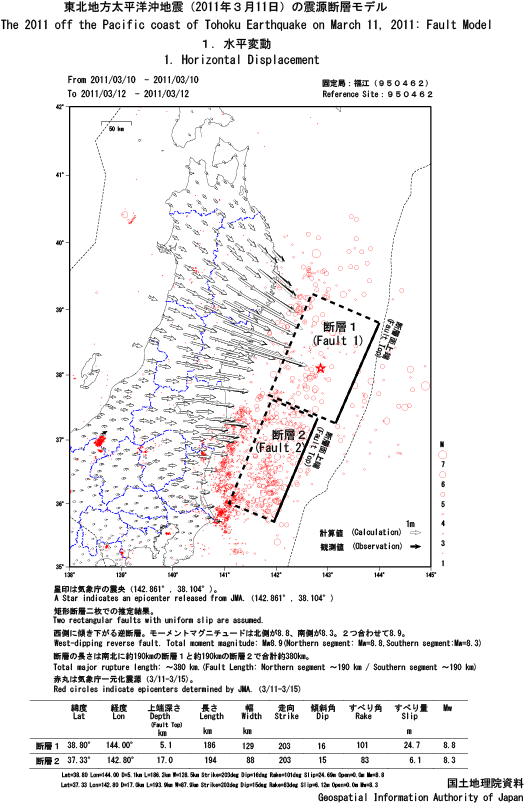 Results imply a huge slip on the shallow plate boundary close to the trench, which could cause a great tsunami. It is difficult to explain the size of the tsunami only from that results, though they should give good constraints to the model by combining them with some other data.  Although the seafloor may have been seen to shift horizontally by this astonishing figure, the distance the opposing slabs of rock at the site of the rupture slipped past each other under the seabed would have been even greater – perhaps 50-60m by some estimates.

The quake’s size and location surprised many researchers. There was general agreement that the “Miyagi segment” of fault that broke on 11 March had not built up the strain seen at other segments along the plate boundary, where Magnitude 7-plus tremors have occurred on a fairly consistent basis. But the models built by Professor Simons’ team from a mass of observational data show this assumption to have been deeply flawed. 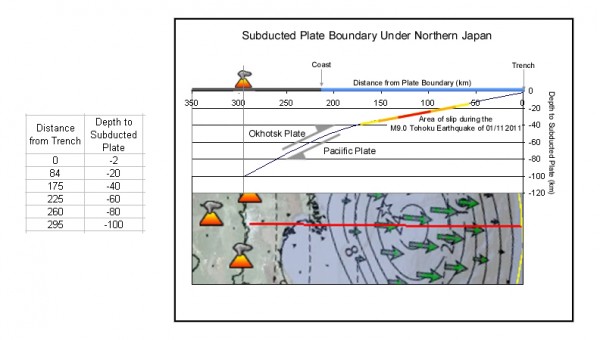 Quite why such large strain should accumulate in the Miyagi area is not clear. One suggestion is that features on the descending Pacific plate, such as an underwater mountain, or seamount, can get stuck as it goes down under Japan. As the area around the pin creeps, it can fire off small earthquakes which in this case could be magnitude sevens or a small eight, but eventually the pin snaps and everything goes; and, if it’s waited a thousands years, you might get 50-100m of slip on the fault.

The flawed thinking shown up on 11 March raises questions now about what might happen further to the south, closer to Tokyo, where one quarter of Japan’s population resides. The so-called Ibaraki segment of the plate boundary has been thought to behave in similar fashion to that of the Miyagi segment.

According to the latest police figures, almost 15,000 people are now known to have died in the 11 March disaster with a further 11,000 still listed as missing. (BBC) 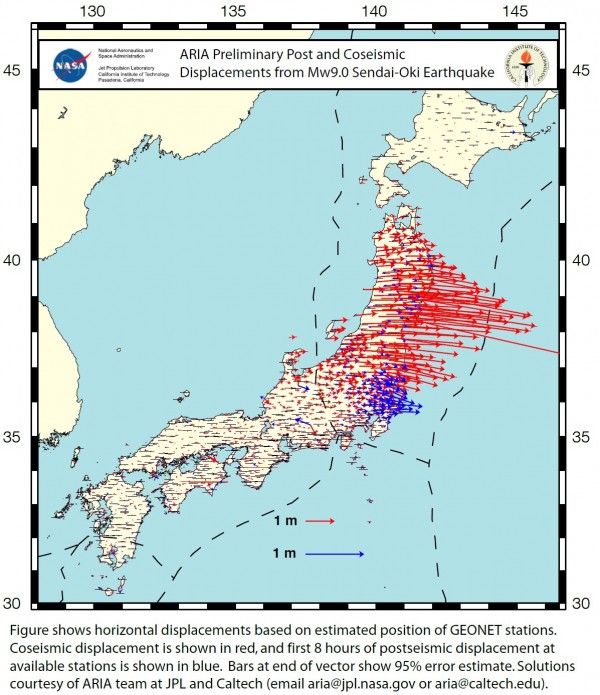 Read our previous research about sinking of Japan islands: