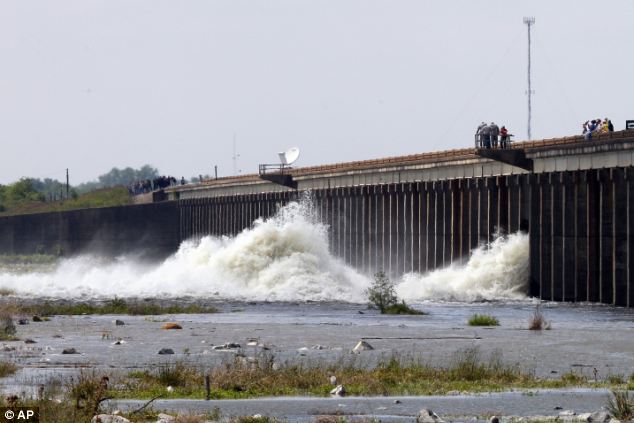 In a historic action designed to minimize the risk of catastrophic flooding in Baton Rouge and New Orleans, the Army Corps of Engineers has begun opening the Morganza Floodway to divert water from the rain-swollen Mississippi River into the Atchafalaya basin.

The second-ever opening of the nearly 60-year-old structure 186 miles upriver of New Orleans began at 3 p.m. sharp, when a crane lifted a gate covering one of the spillway structure’s 125 bays, releasing a gusher of about 10,000 cubic feet of water per second into the floodway. A live video feed of the procedure is being streamed online by the corps.

More of the 28-foot-wide bays will be opened in the coming days to gradually increase the flow rate to about 125,000 cubic feet per second. About 25,000 people and 11,000 structures are in harm’s way, as up to 25 feet of flooding is expected in a 3,000 square-mile area of Cajun country stretching from Melville to Morgan City. The water is expected to pass below Interstate 10 in a day and reach Morgan City in three days.

The decision to open the spillway was triggered when the river’s flow rate reached 1.5 million cubic feet per second and rising at Red River Landing across from the State Penetentiary at Angola. Those conditions occurred Friday afternoon, prompting corps officials to announce the spillway would be opened within 24 hours.

The Morganza control structure was completed in 1954 as part of the corps’ sweeping flood-protection upgrades to prevent a repeat of the Great Flood of 1927. The only other time the spillway opened was in 1973 to relieve pressure on the Old River Control Structure, a critical barrier 35 miles upriver that prevents the Mississippi from its natural tendency to shift course to the Atchafalaya Basin, a steeper shortcut to the Gulf of Mexico. Such a shift would have a catastrophic economic impact on the ports in New Orleans and Baton Rouge.

Opening the Morganza Spillway and the Bonnet Carre Spillway near Norco is designed to avoid a doomsday scenario in which New Orleans could be swamped with 20 feet of water, far worse than the flooding during Hurricane Katrina in 2005.

Saturday marked the first time in history that all three floodways built by corps after 1927 flood — the Morganza Floodway, the Bonnet Carre Spillway and the Birds Point floodway in Missouri — have been in operation at the same time, according to the corps. (NOLA) 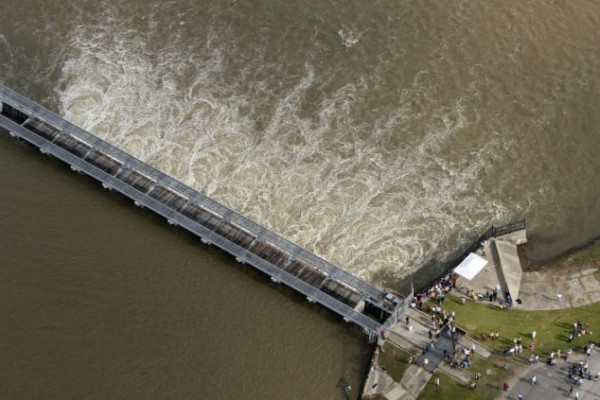 There is no public access at Morganza Floodway. The link below will take you to a live streaming video of the opening of the Morganza Floodway. The live stream is provided so that you can watch the opening from your computer instead of physically being at the floodway. We anticipate the channel will be live at approximately 2:30 PM on Saturday, 14 May for a press conference and then for the opening of the first bay. (US Army Corps of Engineers New Orleans) 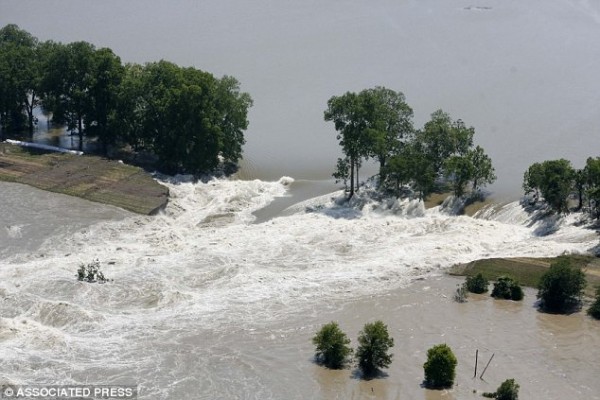 The Army Corps of Engineers has released maps showing the estimated flooding in the Missississippi River and Atchafalaya River basins under three different scenarios. 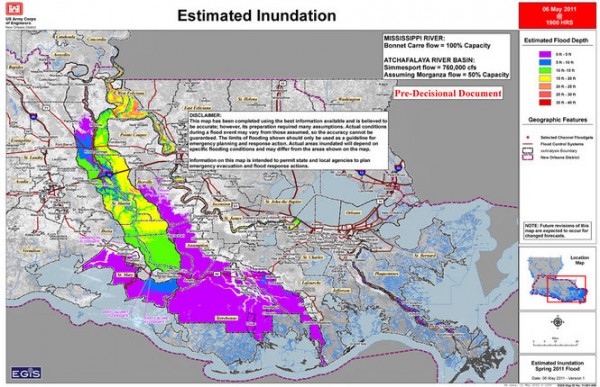 The first scenario, which they issued last week, shows the flooding that would occur if the Morganza Floodway was opened at 50 percent of capapcity.

The second scenario shows the flooding that would result from allowing 1.8 million cubic feet per second of water to flow down the Mississippi River without operating the Morganza Floodway.

The third scenario shows the flooding that would result from allowing 1.5 million cubic feet per second of water to flow down the Mississippi River while diverting the excess water through the Old River Control structure and not operating the Morganza Floodway. 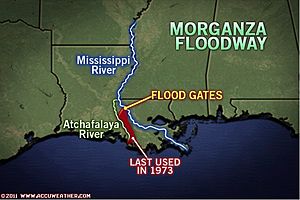 Residents in the nearby Cajun Country are packing up their belongings and moving to higher ground. Sheriffs and National Guardsmen are moving from house to house in the neighbor hoods and advising residents to leave the area.

The opening of the spillway is "necessary" to relieve pressure on levees downstream. Engineers have advised that weeks of pressure on the levees could result in their failures. If this happens, New Orleans, Baton Rouge, oil refineries and chemical plants along the lower Mississippi River could flood with as much as 20 feet of water.

With the Morganza Spillway open, the resulting flood will affect about 25,000 people and 11,000 structures. Jindal has said that shelters are set up to accept up to 4,800 people.

The flood waters have the potential to leave approximately 3,000 square miles under as much as 25 feet of water in some areas of Louisiana's Cajun Country. (AccuWeather)

The Daily Mail is reporting that hundreds of FEMA Trailers have been set up for evacuees of the Morganza Floodway.

Although not expected to be as intense as that of April, the ongoing weather pattern will continue to support the "Waterworld" look of the lower Mississippi Basin. The "Battle along the Mississippi" will continue for weeks as additional rounds of rain affect the middle of the nation.

The watershed of the Mississippi River is huge, draining areas from the Plains to the Upper Midwest, part of the South, and even reaching to the central Appalachians. Major tributaries include the Ohio, Missouri, Des Moines, Red (of the South) and Arkansas rivers. 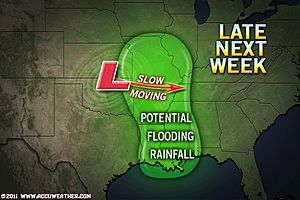 While rainfall in part of this vast area is inevitable and expected, it would take a lot to add to high water levels already experienced. However, there is a slight risk of that happening in Louisiana and Mississippi, where the river will be reaching its peak level and flow later next week.

A storm system passed through the Mississippi Valley in recent days with areas of heavy rain and gusty thunderstorms. However, other than isolated incidents of flash and urban flooding, the rain has not been heavy enough this week over a large enough area or on key areas to significantly impact river levels.

There is some indication that the system later next week could put down several inches of rain or more in a sizable area of Arkansas, Mississippi and Louisiana.

Normally, it takes runoff a long time to reach the rivers in the Mississippi Delta region. However, if enough of it falls right in the backyard, so to speak, it could slightly add to currently forecast water levels.

The complete recession of flood waters will take weeks, if not a month or more in some areas, after the river and its tributaries crest, even if it were not to rain a drop.

Renegade bursts of rain in the Delta and anywhere along the major tributaries would prolong the event, adding days or even weeks to the problem. (AccuWeather)