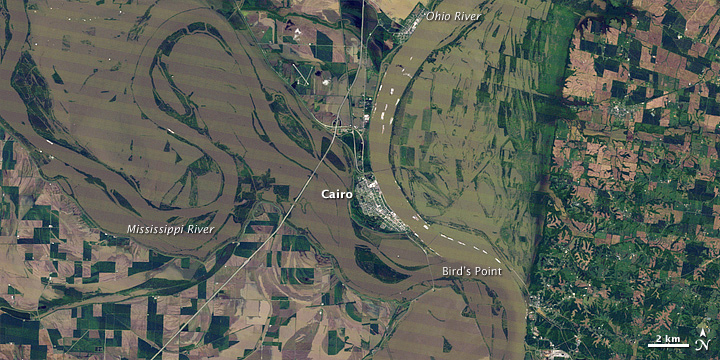 Unrelenting spring rains fell on the Mississippi Basin, and residents along the river watched with trepidation as water levels surged, wondering if the levees that protected them would hold. Communities worked ceaselessly to shore up the beleaguered levees until a section opened up, inundating thousands of acres. The date? April 1927. By the time the floods receded in July, more than 26,000 square miles of land had flooded in seven states, killing at least 246 people and destroying 41,487 buildings.

In late April 2011, unrelenting spring rains pounded the basin once again, and water levels on the Ohio and Mississippi Rivers rose to record levels. The ftop image, taken by the Landsat-5 satellite on May 3, 2011, shows the confluence of the two swollen rivers. The lower image shows the rivers at normal spring levels in 2010. In 2011, floods blanket farmland along both rivers. 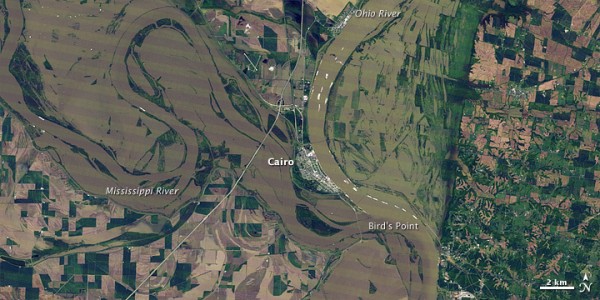 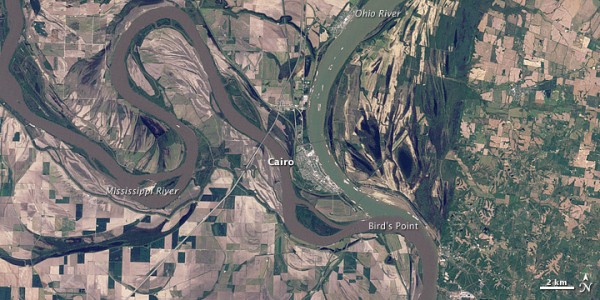 In the face of potentially disastrous flooding, the U.S. Army Corps of Engineers set into motion a plan devised after the devastating floods of 1927. They decided to flood the New Madrid Floodway south of Cairo, Illinois and the confluence of the two rivers.

Following the 1927 floods, the Corps built a series of floodways, including the New Madrid Floodway, along the Mississippi River’s historic floodplain to act as a sort of pressure valve when floods threatened to overwhelm the levees. The 1927 floods showed that no levee system could contain the mighty Mississippi River during big floods. 2011 marks the first (and only other) time since 1937 that the New Madrid Floodway has been used.

In the top image, the muddy water extending south of the Bird’s Point Levee is flowing over farmland in the New Madrid Floodway. The overflow into the floodway relieved flood conditions upstream. At the time the image was taken, the Ohio River in Cairo was at 60.62 feet (18.48 meters), down from a record peak of 61.72 feet (18.81 meters) on May 2 before the Corp blasted the levee open. Flood stage is 40 feet (12 meters).

By opening the floodway, the Corps intended to relieve pressure on the entire river system, hoping to avoid a repeat of the 1927 disaster. (EarthObservatory)