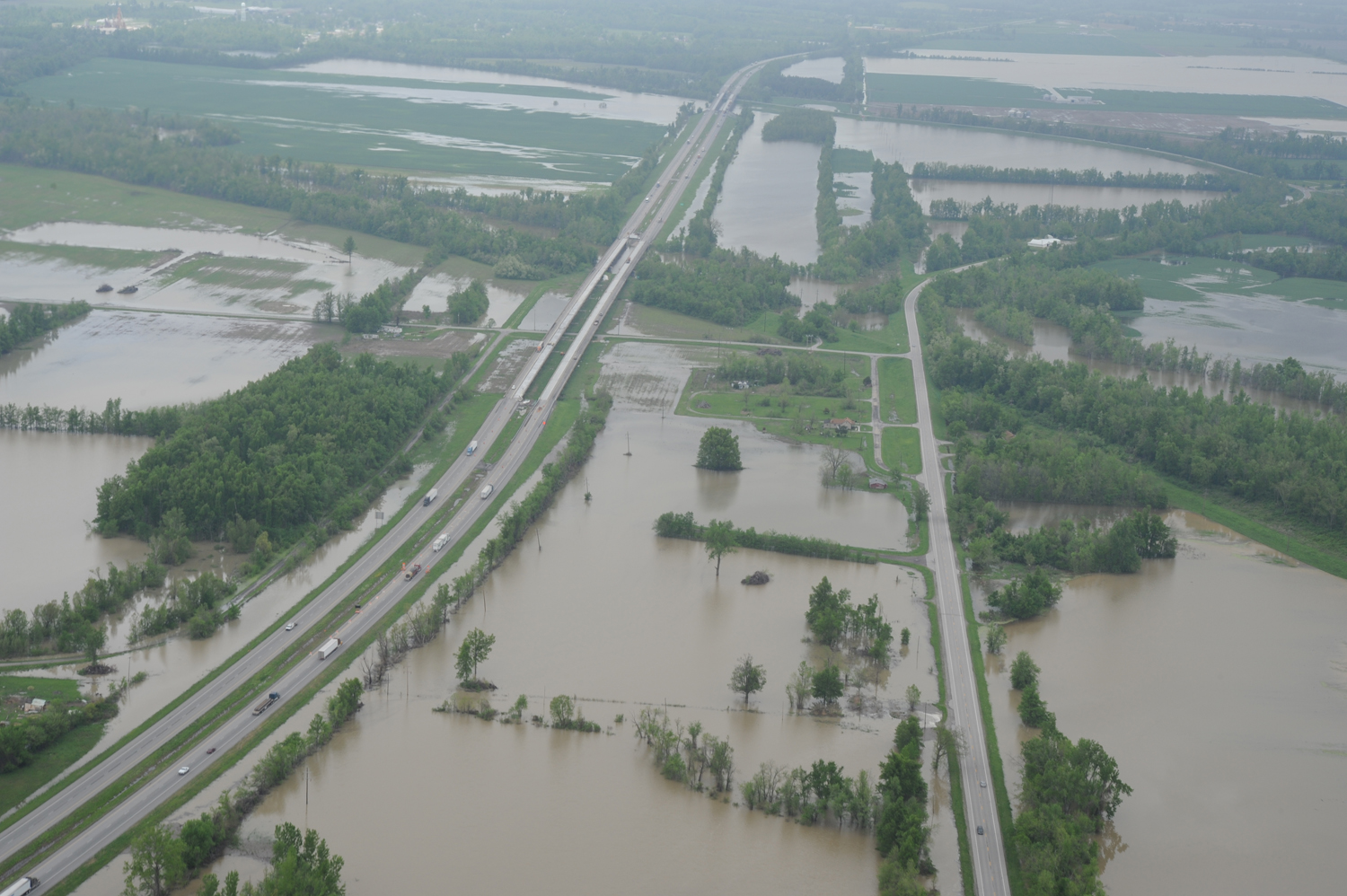 Historic high waters at Wappapello Dam cut away a nearly 400 foot section of Highway T and much of its $18 million in infrastructure early Monday morning as the lake broke through a temporary dike and roared over the concrete spillway it was shielding. Chunks of pavement and earth 30 to 40 feet deep were carved away by the surging water.

Wappapello Lake is expected to crest this week above any amount seen there before, and is releasing extremely high volumes of water into the already full St. Francis River.

The dam continues to operate as designed, but authorities strongly caution that residents in areas along the St. Francis River prone to flooding be aware of rising water in the coming days. Water may reach levels and locations not seen previously, they say.

Already entrances into Greenville in Wayne County, Mo., above the lake, have been flooded, stopping vehicle traffic in or out of the town. Residents of Qulin worried this morning that the city could find itself in a similar situation before the end of Butler County’s second major flood event in two weeks.

No mandatory evacuation orders had been issued within Butler, Stoddard or Wayne counties as of 10 a.m. Residents in affected areas were advised of the dangerous conditions either through door to door canvassing or phone calls.

“We expect to crest at 399.2 feet on Wednesday or Thursday,” said Park Ranger Aaron Winchester. “The total discharge will be 23,450 cubic feet per second.”

AT 109 PM CDT…EMERGENCY MANAGEMENT AND OTHER OFFICIALS ARE
REPORTING THAT WATER RELEASES ARE UNCONTROLLED…AS WATER CONTINUES
TO OVERTOP THE SPILLWAY AT LAKE WAPPAPELLO.

THE LEADING EDGE OF ANOTHER ROUND OF MODERATE TO HEAVY RAINFALL IS
EXPECTED TO INCREASE IN INTENSITY DURING THE AFTERNOON AND OVERNIGHT
HOURS. THIS WILL ONLY WORSEN CURRENT CONDITIONS ALONG THE SAINT
FRANCIS RIVER.

IT SHOULD BE NOTED THAT HIGHWAY T DOWNSTREAM OF THE DAM HAS WASHED
OUT…AND IS IMPASSABLE.

THE MISSOURI DEPARTMENT OF TRANSPORTATION HAS EXPRESSED SERIOUS
CONCERN THAT THE CURRENT FORECAST RECORD STAGE OF 28 FEET NEAR FISK
WILL PLACE PART OF HIGHWAY 60 DOWNSTREAM OF THE LAKE WAPPAPELLO DAM
AT RISK. IF YOU PLAN TRAVEL IN OR NEAR THIS AREA…BE SURE HAVE
ALTERNATE ROUTES IN MIND TO REACH YOUR DESTINATION.

FLOOD WATERS ARE EXPECTED TO CONTINUE MOVING DOWN THE SAINT FRANCIS
RIVER AND ITS TRIBUTARIES FROM LAKE WAPPAPELLO DOWNSTREAM…POSSIBLY
TO THE MISSOURI STATE LINE. WATER LEVELS OF THIS MAGNITUDE ON THE
SAINT FRANCIS RIVER HAVE NOT BEEN EXPERIENCED IN THIS AREA SINCE
1945.

IT SHOULD ALSO BE NOTED THAT THE SAINT FRANCIS RIVER AT FISK IS
FORECAST TO REACH A RECORD CREST OF 28.0 FEET THURSDAY
MORNING…EXCEEDING THE HIGHEST STAGE ON RECORD. THE EXACT IMPACT ON
AREAS SURROUNDING THE SAINT FRANCIS RIVER NEAR FISK IS NOT KNOWN AT
THIS TIME. AT 9 AM CDT MONDAY…THE STAGE AT FISK WAS 23.8 FEET. AT
24.0 FEET…MORE THAN TEN THOUSAND ACRES OF LAND FLOOD ON THE LEFT
BANK NEAR FISK…AND AT 27.5 FEET…THE RIGHT BANK LEVEE IS
OVERTOPPED.

TO REPORT FLOODING…HAVE THE NEAREST LAW ENFORCEMENT AGENCY RELAY
YOUR REPORT TO THE NATIONAL WEATHER SERVICE FORECAST OFFICE IN
PADUCAH.