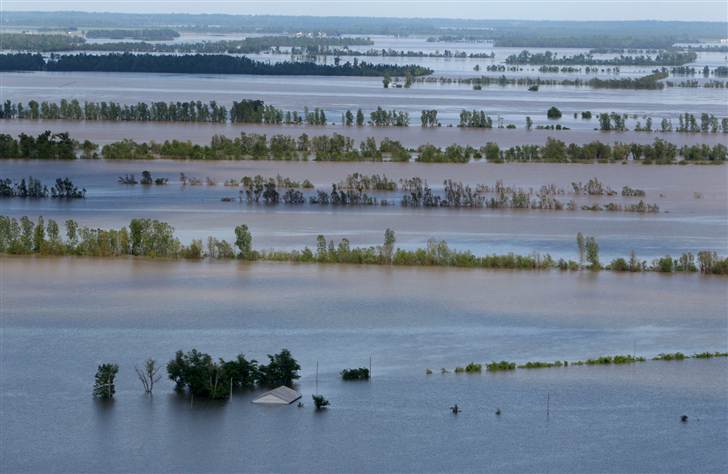 As engineers blasted a third section of a Missouri levee in a bid to manage flooding along the Mississippi and other rivers, Memphis residents prepared Thursday for flooding there that could last through all of May. The rising Mississippi river lapped over downtown Memphis streets as a wall of water threatened to unleash near-record flooding all the way to the Gulf of Mexico.

The slow-motion nature of the flooding in the Memphis area could create even more problems when the water recedes. Memphis could see a crest of 48 feet on May 11, just inches below the record of 48.7 feet set in 1937. Some homes in Mud Island, a Memphis neighborhood, have already seen water reach their foundations.

Water from the Wolf and Loosahatchie rivers also has seeped into the suburbs, and some mobile home parks were swamped. In Missouri, the Army Corps of Engineers blew up a section of the Birds Point levee to ease pressure on floodwalls downriver.

The Corps, which is responsible for the system of locks and dams along the Mississippi River, said it would next turn its attention to the growing threat farther south. President Barack Obama on Wednesday declared parts of Tennessee, Mississippi and Kentucky disasters, making the states eligible for federal help with relief efforts. It does not cover individual assistance.

Farther downstream in Mississippi, some residents of the historic Civil War town of Vicksburg were moving to higher ground to avoid the rising flood waters. The relief from blowing up the levee is probably only temporary downstream in Kentucky, Arkansas, Tennessee, Mississippi and Louisiana because the water will eventually find its way back into the Mississippi River.

In Kentucky, about 3,800 residents have left their homes and barge traffic on the Ohio River and tributaries was closed. Canal locks were shut to help control flooding downstream on the Mississippi River. (MSNBC). 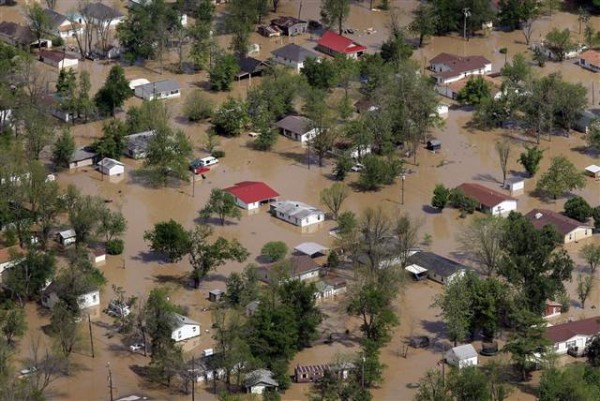 When the U.S Army Corps of Engineers detonated explosives to open the Birds Point – New Madrid floodway in Mississippi County, Mo., the blast was so strong it could be felt all the way downriver in Dyer County, which is almost 65 miles away. In fact, the blast registered on 90 seismograph stations that are operated throughout the New Madrid seismic zone by the Center for Earthquake Research and Information (CERI) at the University of Memphis, including the one in RoEllen. The first blast was registered on Monday at 10:02:29 p.m. and the second was on Tuesday at 12:35:56 p.m..

Gary Patterson, director of education and outreach at CERI, stated the people who experienced the event encountered a high-amplitude sound wave. Patterson stated the explosions did not trigger any earthquakes, but CERI researchers are very interested in how this energy was transferred through the ground as vibration, and through the air as a blast of sound, both of which can be seen on their seismic stations.

“Although we still have to learn about how the earth works as a system, the weight of the floodwater is probably not big enough to trigger an earthquake in the Central U.S.,” stated Patterson. “However, it depends on how much water and if the fault system is already charged up and ready to rupture. Scientists don’t know if the New Madrid system is ready to rupture, but we do know that the great floods over the last century did not cause any significant earthquakes, including the Great Flood of ’37, which is similar to the current flood level.“

Dr. Mitch Withers, CERI’s seismic networks director, gives a quantitative answer to the question. He stated the percentage of added water relative to the overburden of the earth’s crust that’s already there is a very tiny fraction of additional weight. Withers went on to say it would have no impact on strike slip faults like the southern and northern arms of the New Madrid Seismic Zone.

“The central system is a thrust fault so the added weight would increase the normal stress making an earthquake less likely,” stated Withers. “It’s also possible to promote earthquakes by adding water on the fault and increasing the pore pressure (e.g. waste-water injection). I don’t know how long it takes surface water to percolate through 5km of rock, but I would guess its decades to centuries.”

The corps will again set off explosives at Birds Point at 1 p.m. today in its final operation of the floodway. (StateGazette)

A flooding tributary threatened to cut off Interstate 40, a major east-west route through Arkansas, and the Army Corps of Engineers planned to blast a new breach in a Missouri levee in hopes of controlling the slow-motion disaster flowing downriver. Thousands of people from Illinois to Louisiana have already been forced from their homes, and anxiety is rising along with the river, though it could be a week or two before some of the most severe flooding hits.

The great flood of the lower Mississippi River Valley in 1927 was one of the biggest natural disasters in U.S. history. More than 23,000 square miles were inundated, hundreds of thousands of people were displaced and hundreds died. More devastation came in 1937 when 31,000 square miles were submerged from West Virginia to Louisiana.

The relief from blowing up the levee is probably only temporary downstream in Kentucky, Arkansas, Tennessee, Mississippi and Louisiana because the water will eventually find its way back into the Mississippi River.

In Arkansas, a stretch of westbound Interstate 40 was closed where it crosses the White River, adding a 120-mile detour to the main route to Little Rock from Memphis. The state highway department said eastbound lanes remained open Thursday but flooding appeared imminent and they too could be shut.

Arkansas recorded its eighth death since the rains started April 25 when authorities found the body of a man in the floodwaters in eastern Arkansas’ Prairie County. In Kentucky, about 3,800 residents have left their homes. Memphis, where the Mississippi was at 43.8 feet Tuesday, could see a crest of 48 feet on May 11, just inches below the record of 48.7 feet set in 1937. Water from the Wolf and Loosahatchie rivers already has seeped into the suburbs, and some mobile home parks were swamped.

In Louisiana, shippers, ports and the chemical industry hoped the government could dredge fast enough to keep a major channel into the Gulf of Mexico unclogged. The Mississippi sends huge amounts of sediment downriver during high-water times. (WAFB)

High Flows and Flood History on the Lower Mississippi River