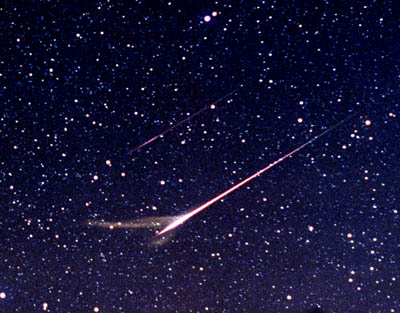 Bits and pieces of the famous Halley’s Comet will light up the overnight sky in a promising meteor shower, weather permitting, skywatching experts say.

The annual Eta Aquarid meteor shower will peak early tomorrow morning (May 6) and is expected to put on a dazzling display of “shooting stars” for skywatchers graced with good weather and clear skies. That’s because the moon, which is currently in its unlit new phase, won’t interfere with the meteor light show as it did with last month’s Lyrid shower.

The Eta Aquarids are meteors created by bits of left over material from Halley’s Comet as it travels through the solar system on its 76 year orbit. This year, the display runs from April 28 through May 21, but May 6 should mark its peak, according to the American Meteor Society. 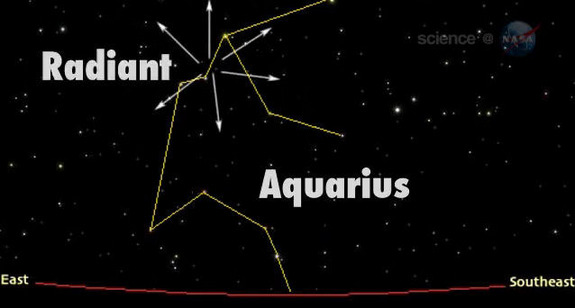 This sky map of the Eta Aquarid meteor shower shows where the meteors will appear to originate from during their display. The best time to see them will be early Friday morning before 2 a.m. and 3 a.m. Local Time.

The Earth passes through the comet Halley’s debris trails twice a year – once in May, and again in October – offering an appetizer for the comet’s next trip through the inner solar system in 2061. Halley’s comet last swung by in 1986.  NASA scientists say that the combination of the Eta Aquarid meteor shower and lack of moonlight should offer a rare chance for avid meteor-hunting skywatchers.

Here’s how to see the Eta Aquarid meteor shower created by Halley’s Comet, according to NASA:

Meteors can appear in any part of the sky. Their trails will tend to point back toward the radiant, so if you look that way the meteor may appear somewhat stubby. They’ll appear much longer going by you than coming at you.

If you have a dark, wide view of the night sky, you should be able to see some meteors by just lying down and gazing upwards. A good blanket or a comfortable outdoor chair is useful for long skywatching vigils.

Eta Aquarids are fast, moving at 66 km/s (148,000 mph), and often trace long paths across the sky, sometimes leaving glowing, persistent trains. In the Northern Hemisphere, depending on your latitude

If you catch photos of the Eta Aquarids meteor shower and would like to share them with SPACE.com for a possible story or image gallery, please contact managing editor Tariq Malik at: tmalik