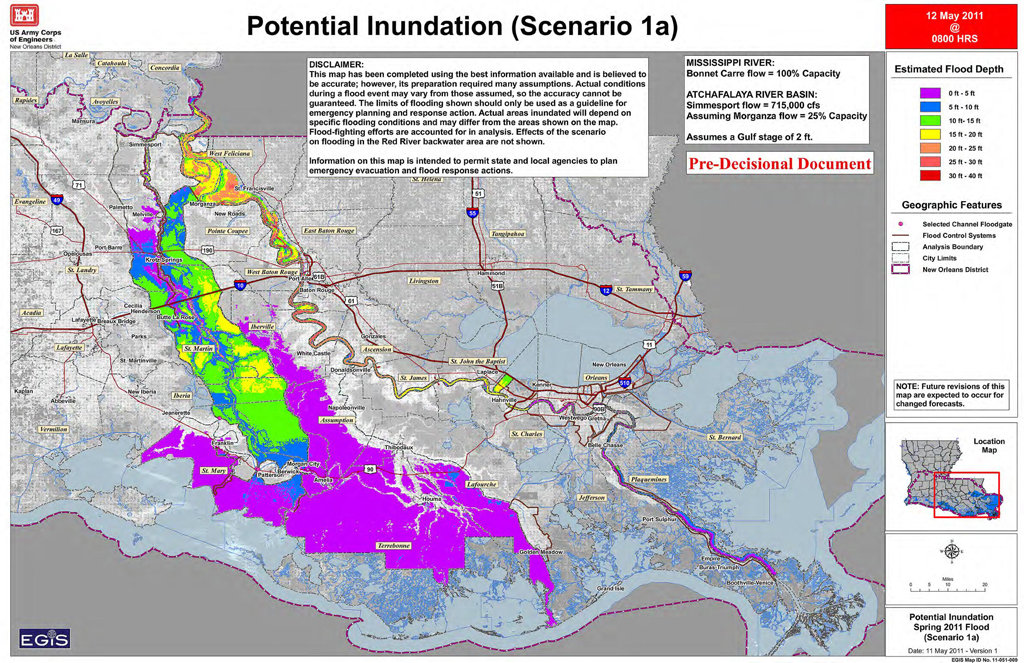 The Army Corps of Engineers has updated their inundation estimates for the Mississippi River and Atchafalaya River basin based upon opening the Morganza Floodway at 25 percent of capacity.

The corps has also released a map showing the estimated times it will take the flood waters to reach the various communities within the next week or so. (NOLA) 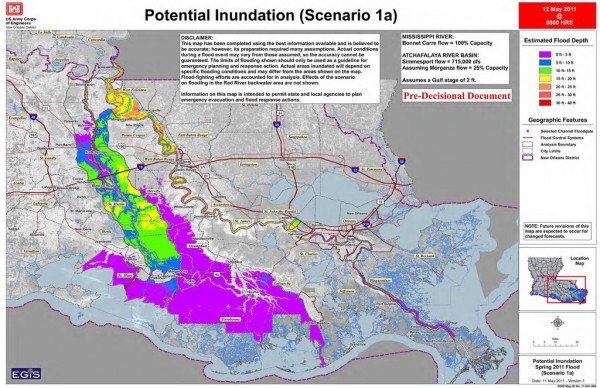 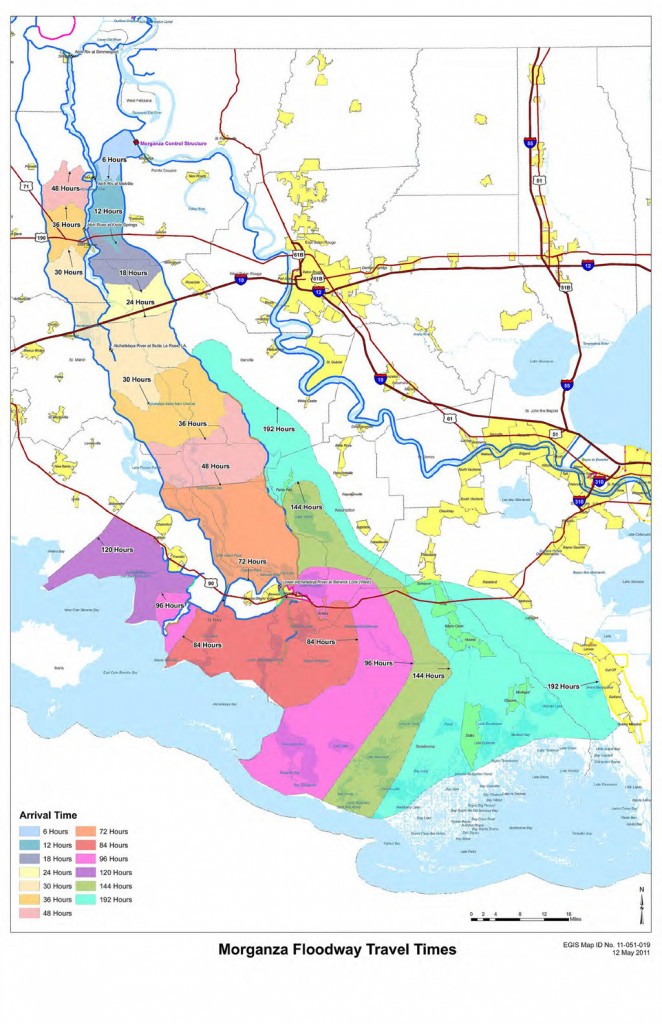 Thousands of people who evacuated Louisiana's Cajun country over the weekend began a long, stressful wait Monday to see if their homes, farms and businesses would be swamped by diverted Mississippi River waters.

In towns like Amelia, about 100 miles south of the spillway that was opened Saturday, crews worked around the clock to build earthworks and reinforce levees ahead of water expected to reach the area by Tuesday. The flooding earlier submerged parts of Memphis. Other Louisiana towns, like Krotz Springs, Butte LaRose and Morgan City, also were making plans for severe flooding that could last for three weeks before the water works its way to the Gulf of Mexico.

Krotz Springs  will be among the first towns to feel the flood's effects. About 2,000 people on Sunday were ordered to evacuate from St. Landry Parish, just south of Krotz Springs. In Krotz Springs itself, locals were also urged to leave by Sunday afternoon.

About 2,500 people live in the Morganza Spillway's flood path. Some 22,500 others, along with 11,000 buildings, could be affected by backwater flooding — the water pushed back into streams and tributaries that cannot flow normally into what will be an overwhelmed Atchafalaya River. Some 3,000 square miles of land could be inundated in up to 20 feet of water for several weeks. When flows peak around May 22, the spillway will carry about 125,000 cubic feet per second, about one quarter of its capacity.

Deputies all over Louisiana Cajun country were warning residents to head for higher ground and most heeded it, even in places where there hasn't been so much as a trickle, hopeful that the flooding engineered to protect heavily populated New Orleans and Baton Rouge would be merciful to their way of life. (msnbc) 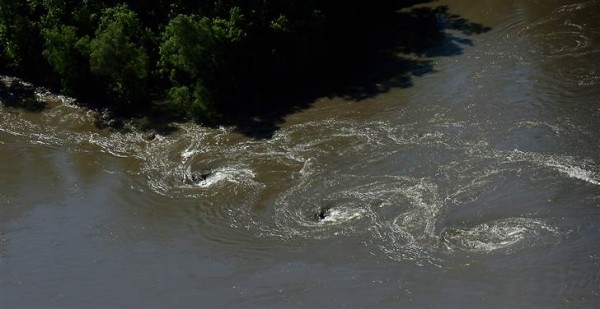 The Mississippi River poured across Louisiana lowlands unleashed by its U.S. Army minder Monday on its way to inundate thousands of homes and businesses as the Corps of Engineers fights to spare Baton Rouge and New Orleans.

The water was rising early Monday in St. Martin Parish, one of the areas in south-central Louisiana affected by the opening of the Morganza Spillway by the U.S. Army Corps of Engineers

Gov. Bobby Jindal offered at least a ray of hope to his state's residents on Monday, saying the decision to open the spillway has lowered crest projections in parts of the state. Just as important, river observations now suggest the Corps may need to divert less water from the spillway than initially thought, he said. That would mean less water in communities in the path of the spillway. But he warned that flooding, in some cases at record levels, is still coming.

A near-record crests is forecast in Greenville, Mississippi, on Tuesday, followed through the weekend by record crests in Vicksburg, Mississippi; Natchez, Mississippi; Red River Landing, Louisiana, and Baton Rouge, according to the National Weather Service. The river at Natchez is expected to rise five feet above the highest recorded level of 58 feet, set in 1927, weather service forecasts show. The predicted crest is 15 feet above flood stage. 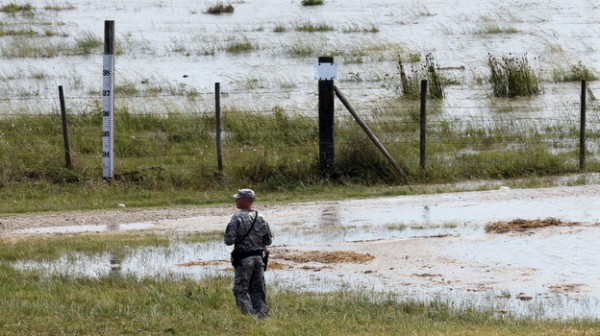 The U.S. Coast Guard has closed the river to navigation along a 15-mile stretch near Natchez. High water has already chased members of the U.S. Coast Guard stationed in Natchez from their offices. The 16 people stationed there are currently working aboard the USCG Cutter Greenbriar.

In Louisiana, about 2,500 people and 2,000 structures directly in the path of the Morganza Spillway water face certain flooding. As many as 22,500 other people will either experience flooding or have to depend on newly built and enhanced levees to protect their properly, he said.

The flood, the most significant in the lower Mississippi River valley since at least 1937, has affected nine states: Missouri, Illinois, Kentucky, Tennessee, Ohio, Indiana, Arkansas, Louisiana, and Mississippi. Across the South and lower Midwest, floodwaters have already covered about 3 million acres of farmland, eroding for many farmers what could have been a profitable year for corn, wheat, rice and cotton, officials said. As many as 22 cities and communities where river levels are monitored by the U.S. government remain flooded, some of them weeks after both the Mississippi and Ohio rivers climbed out of their banks.

Six days after the Mississippi River crested at Memphis, Tennessee, the water remains 11 feet above flood stage, according to the National Weather Service. The swollen knot in the river is currently passing through Louisiana.

When the Corps of Engineers opened two gates in the Morganza Spillway on Saturday, it was the first time in almost 40 years any of the 125 bays had been opened. The Corps opened seven more gates on Sunday and two more were opened at midday Monday. The plan is to let out water from as many as one-fourth of the spillway's bays. So far, the controlled release of water from the river has lowered the projected flood levels for five communities and cities where the Corps maintains monitoring gauges. That includes Baton Rouge and New Orleans, which is 115 miles southeast of the spillway.

The lowered crests will be little consolation to those in the path of the spillway, which sends water down the Atchafalaya River basin. Officials say the spillway's gates are likely to be open for weeks, and it will be weeks before the river falls below flood stage and those who have evacuated can safely return.

The weather service predicted the Mississippi River will crest at 45 feet in Baton Rouge, the Louisiana capital, on Tuesday. That is 2.5 feet lower and six days earlier than the weather service had forecast prior to the opening of the Morganza spillway. On Monday, it was 44.6 feet. In New Orleans, the river on Monday was already cresting at 17 feet, one week earlier and more than two feet lower than previously projected by the National Weather Service. It is also four feet lower than the historic level recorded in New Orleans in 1922. (CNN)