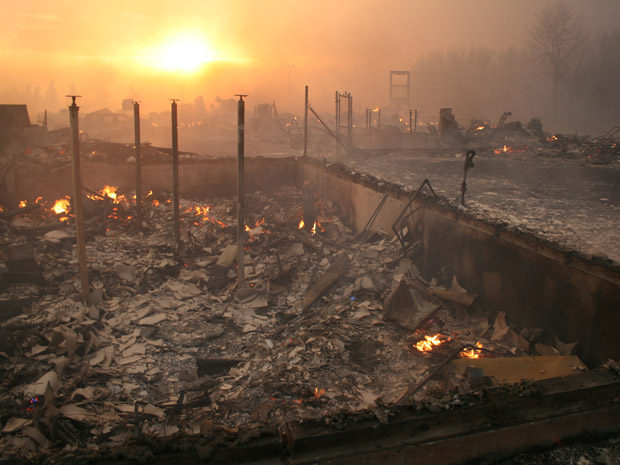 May 17, 00:05 UTC: Update on wildfires in Slave Lake and other communities from the Gov't of Alberta Press Release:

Edmonton… Approximately 1,000 firefighters continue to combat wildfires around Slave Lake and throughout the province, while evacuees receive care and support at reception areas.   Below is an update on recent developments.

There are presently 115 wildfires in Alberta, 36 of which are out of control.  These active wildfires have burned approximately 107,000 hectares of land.  In the Lesser Slave Lake area alone, there are 15 wildfires burning out of control:

There are also out-of-control wildfires in the Red Earth Creek area and multiple forest fires north of Fort McMurray, which required the evacuation of about 2,000 oil workers.

Province-wide, Alberta has deployed approximately 1,000 firefighters, 100 helicopters, 20 air tankers and scores of heavy ground-based machines.  Approximately 400 firefighters and equipment from B.C. and Ontario are expected to arrive in Alberta by May 18.

Water advisory for the Town of Slave Lake
Due to high utilization and potential disruption of the water treatment and delivery system caused by the wildfire in Slave Lake, residents remaining in the area are advised that the water supply is not potable, and should not be used for any drinking, cooking or bathing/washing purposes.  An alternate source of water should be used at this time. (LakeFM) 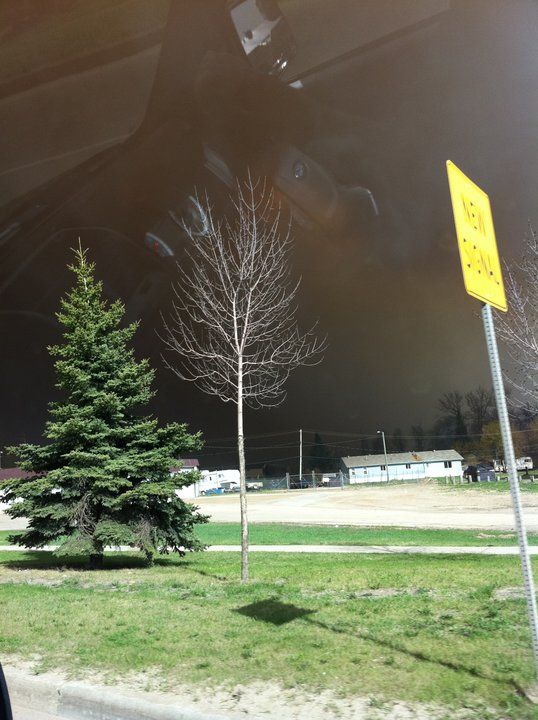 Thousands of people were fleeing their homes Sunday evening as strong winds fanned an out-of-control wildfire into a northern Alberta town where hundreds of buildings were destroyed and many roads to safety were blocked. The Town of Slave Lake advised the community of about 7,000 people to protect themselves from the wildfire by heading for parking lots, beaches or large, green open spaces. A general evacuation was underway. Authorities warned residents to not try to flee on the highways since they were closed. 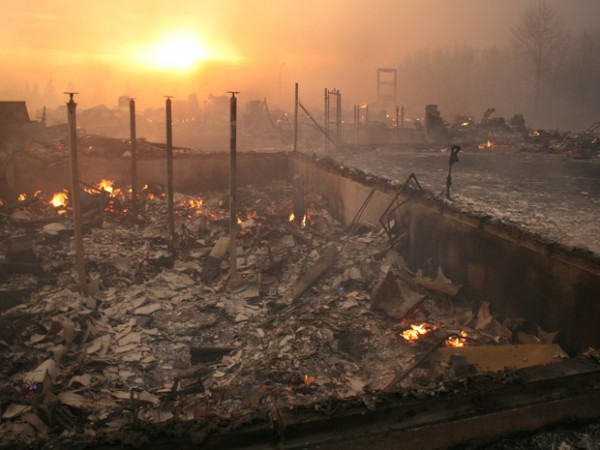 When the fire hit the town, it was nine square kilometres in size. Two roads leading out of Slave Lake are closed, residents can get out through the road leading to Athabasca.

Local radio station 92.7 Lake FM reported on its website that its studio in Slave Lake, as well as the city hall and hundreds of buildings had been lost to the flames. Firefighting aircraft cannot fly over Slave Lake because there are wind gusts of up to 100 km/h and the smoke is too thick. 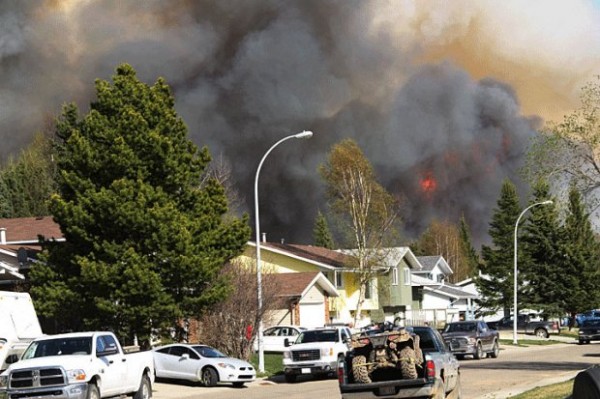 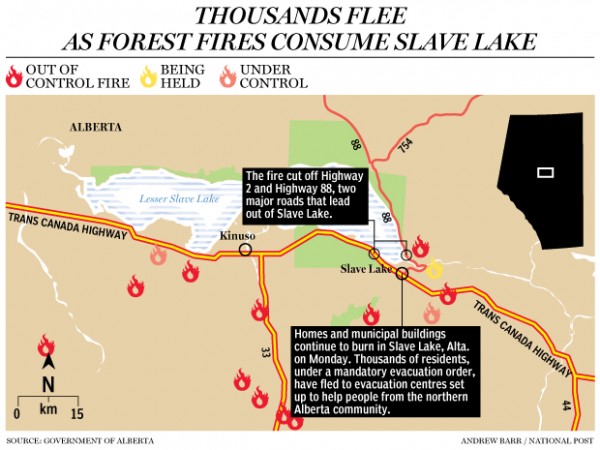 Nearly 30 patients at the hospital in Slave Lake were transported to facilities in other communities. The province said equipment and approximately 200 firefighters from B.C. and Ontario are expected to arrive by Tuesday to help Alberta with its fires.

Slave Lake had declared a state of local emergency earlier on Sunday and was taking in evacuees from surrounding communities. Getting out of town on Sunday evening wasn't easy, according to one Slave Lake resident, who said the lineup of vehicles was long. 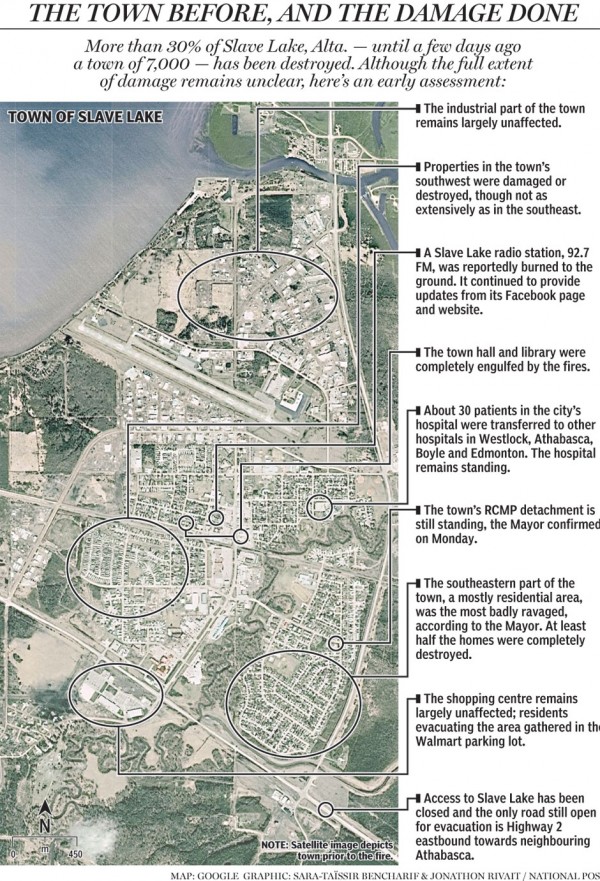 Crews had been working since Saturday to fight two separate fires near the town, but they continued to burn out of control on Sunday due to strong winds and warm, dry conditions.

Close to 900 people living in the rural district near Slave Lake had been told earlier on Sunday to be ready to leave their homes at short notice and were later ordered out. Another 270 had already fled another fire east of the town which destroyed four homes, as well as a number of sheds and recreational vehicles.

Numerous other blazes burned throughout Alberta on the weekend.

A wildfire near Peace River forced cleanup operations at the site of a huge oil pipeline spill last month to be suspended. Plains Midstream Canada, the pipeline operator, said the decision to remove their staff was made after county officials issued an evacuation order Sunday morning. The company said it had also shut the flow on its Rainbow pipeline, which carries crude from its Nipisi terminal to Edmonton, as a precaution. The Lubicon Lake Nation, which is near the area, has evacuated elders, women, children and people with health conditions.

A fire on Saturday that forced the evacuation of Crimson Lake Provincial Park, which is about 150 km southwest of Edmonton, has now been contained and people have been allowed to return. The fire burned about 50 hectares. (Yahoo.News)