An extremely severe rainfall event hit the states of Louisiana and southern Mississippi between August 8 and 15, 2016, when a very slow moving low pressure system continuously pulled tropical moisture from the Gulf of Mexico. This record-setting rainfall and flooding in southern Louisiana have now been calculated at NASA with data from satellites. As of August 15, this event is still in full swing.

NASA's IMERG data from August 8 to 15, 2016 showed over 508 mm (20 inches) of rainfall was estimated in large areas of southeastern Louisiana and extreme southern Mississippi. Even greater rainfall totals of 762 mm (30 inches) were indicated in a small area of Louisiana west of Lake Pontchartrain.

Measurements by the Global Precipitation Measurement or GPM mission core observatory satellite showed that rainfall intensity within the low pressure system increased on August 12 as the low pressure area bringing the rainfall settled over southeastern Louisiana.

Heavy rainfall and flooding is now predicted to occur northward into the Mississippi valley as tropical moisture continues to be transported northward and interacts with a nearly stationary frontal system. Heavy rainfall has also recently affected southeastern Texas and western Louisiana.

The National Weather Service (NWS) in New Orleans, Louisiana noted in a forecast discussion on August 15, "As historical and devastating river flooding continues over areas between Baton Rouge and Lake Maurepas, the weather has returned to a more typical summer pattern with isolated to scattered showers and thunderstorms developing with daytime heating."

NWS also noted that several of the rivers in and around the greater Baton Rouge area still remain at high levels after peaking at record or major crests.

Several points downstream and close to Lake Maurepas still have a way to go before broad cresting. Some locations will also undergo backwater flooding well away from the main streams, so this event remains in full swing. 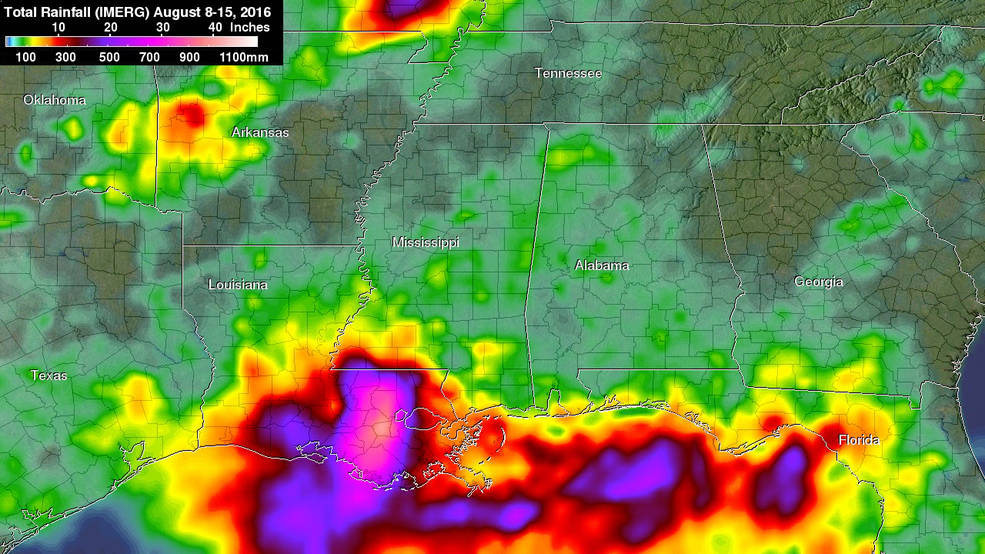 As of Monday, August 15, at least 7 people have lost their lives. More than 20 000 have been rescued from flooded homes and vehicles. The federal government has declared a major disaster in Louisiana. Both Louisiana and Mississippi are under a state of emergency.

This is the second time this year that record flooding rainfall has hit Louisiana. At least 686 mm (27 inches) of precipitation was also reported in Louisiana during the middle of March 2016 and also caused record flooding.