"Many locations have experienced extreme flash flooding, particularly across East Texas and Louisiana. Numerous roadways were flooded, and many high-water rescues were performed," NWS Shreveport said. "Homes and businesses were evacuated in many locations, particularly in Haughton and Minden, Louisiana."

With more than 508 mm (20 inches) of rain since Tuesday afternoon, March 8, a historic flash flooding event in Louisiana caused rivers to quickly rise near record flood stages on March 9 and submerge homes. Some areas reported 254 mm (10 inches) of rain in just 10 hours. A state of emergency was declared in 16 Louisiana parishes and National Guard was sent to help with the water rescues.

The hardest hit was Bossier Parish where officials issued a mandatory evacuation order for residents of 3 500 homes.

Wow. The flooding in Bossier Parish, LA. is extreme and devastating – water up to rooftops. @CBSThisMorning pic.twitter.com/1IquXSYOhM

In Bienville Parish, a 75-year-old man drowned while trying to drive across flooded road. According to Bienville Sheriff, the current from the raging Saline Creek got hold of the vehicle and pulled in into the water. A 70-year-old woman in the car with him was rescued but was suffering from hypothermia.

Nearly 10 inches of rain were recorded in parts of Texas. According to Weather.com, the impacts in some areas were worse than the catastrophic flooding that occurred in May 2015.

The City of Kilgore, TX has declared a state of emergency, a disaster has been declared in Gregg County after it suffered widespread damage. Since Monday, March 7, six tornadoes were confirmed in Texas. A man was killed Monday night when his kayak capsized as strong storms moved into the Houston area.

In neighboring state of Oklahoma, a 30-year-old man drowned in his car while attempting to cross a bridge covered in floodwaters. His passanger managed to escape.

At least a dozen families had to be evacuated from their homes in Chicot County, Arkansas. 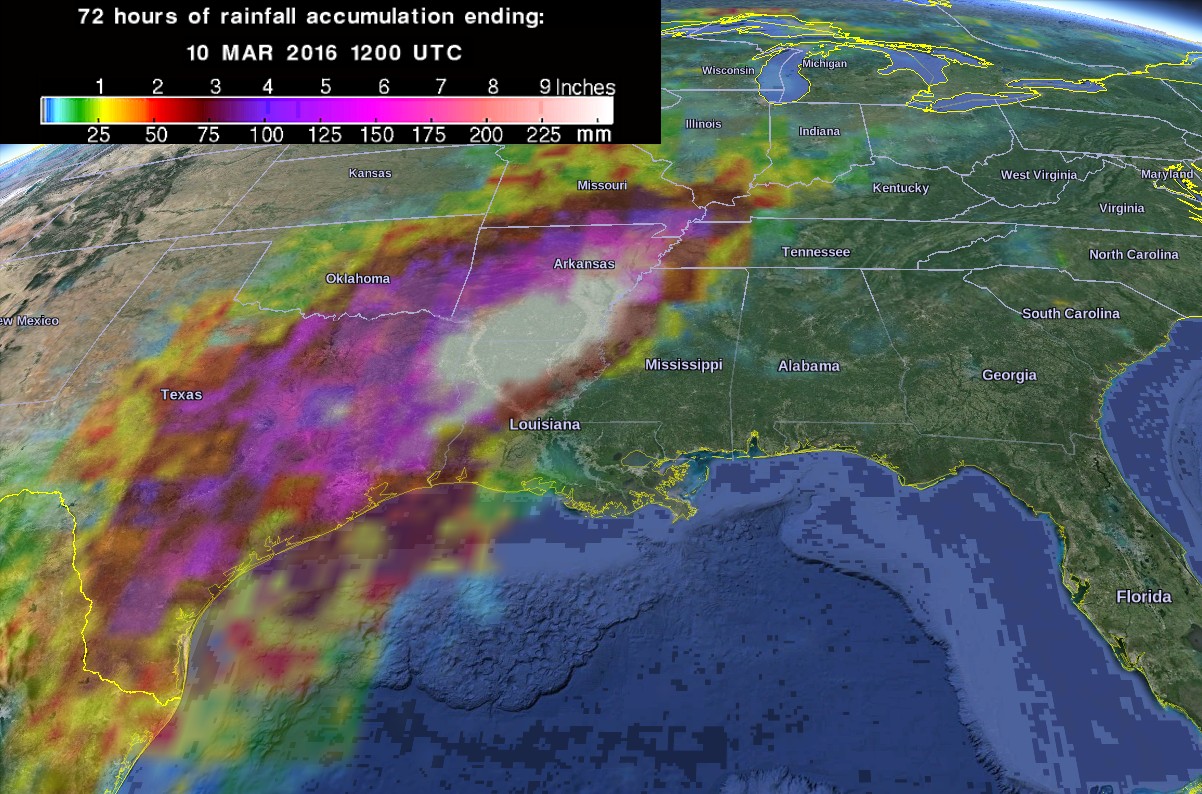 Moisture, instability, and upper-level dynamics will be greatest across the lower Mississippi valley and portions of the southern plains, and this is where the potential will continue for very heavy rainfall with the potential for more flash flooding.

The axis of showers and thunderstorms will shift only slightly eastward on Friday, with many of the same areas once again seeing a threat of heavy rain and flash flooding. The plume of showers will extend across the Ohio valley today (March 10) and into the Northeast, ahead of a cold front.