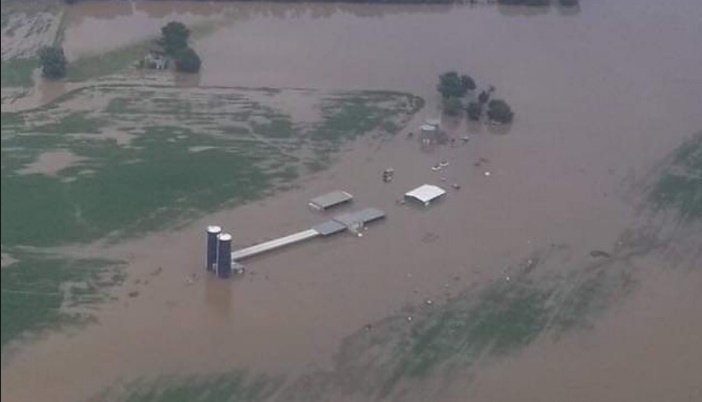 Historic flooding continues across the Midwest, causing levees to breach along the Mississippi and Arkansas rivers. Authorities have issued mandatory evacuation orders for parts of the region. Midwest is experiencing catastrophic flooding since mid-March, leading to historically delayed planting season.

The Dardanelle Levee along the Arkansas River rose 0.6 m (2 feet) above its record crest and breached early Friday, May 31, 2019, near the community of Holla Bend, flooding about 75 homes and forcing residents to evacuate.

"We have had a levee breach in the lower upper bottoms," Dardanelle Mayor Jimmy Witt said. "What this means for Dardanelle is that we will be preparing for a possible flooding situation coming from the bayou side. We will need both sandbagging operations going today and I ask you to please not panic, we have time to prepare for this. It will not be coming into our area for quite a while. Hwy 7 bridge is open and traffic is flowing at a good pace."

Aerial time lapse and pictures of the levee breach of the Dardanelle Levee near Holla Bend. In one of the pictures you can see a slab of road lifted by the swift current across the road. @KATVNews #flooding #Flooding2019 #arwx pic.twitter.com/qXauZcDn1Z

This is our farm just over the border from Fort Smith, AR in Oklahoma. The silos, feedlot, shops, and farmhand’s house all underwater and still rising. All equipment, animals and people were safely moved out. Total crop loss this year. pic.twitter.com/I3CFtkzTwX

The biggest concern is in the unprecedented pressure the flooding has put on the levees as they have never held back this much water for this long, Arkansas Department of Emergency Management said May 29.

"This is looking to be record-breaking all along the Arkansas River, and this is something we have never seen before," Daniel said.

A levee also failed in West Quincy, Missouri, forcing residents to flee to higher ground on May 30. The levee breach took place along the Durgens Creek, which flows into the Mississippi River just upstream of West Quincy.

The Mississippi River near Quincy is already in major flood stage and was less than a 30 cm (1 foot) away from the all-time record level on Thursday night, May 30.

River gauges along the Mississippi River between Quincy and St. Louis have come within feet of their all-time record levels over the past couple of days and there is the potential for some gauges to set new records as they crest.

Major floods are affecting Midwest since mid-March 2019, primarily along the Missouri River and its tributaries in Nebraska, Missouri, South Dakota, Iowa, and Kansas.

From January to early March, average temperatures in the Midwest remained in -6 to -1 °C (20 to 30 °F) range, with record snowfall in many areas, including the early March blizzard which dumped up to 0.9 m (3 feet) in some areas.

Temperatures rose to 15 °C (60 °F) from March 11 to 13 and combined with 38.1 mm (1.5 inches) of rain to quickly melt the snow and cause unprecedented runoff into local streams and rivers.

Many of the rivers were still frozen over with a thick layer of ice, which the powerful flow of water broke up and dislodged, creating massive chunks of ice that traveled downstream, acting like a plow.

According to data released Tuesday by the Agriculture Department, 18 states that produce the majority of the United States’ corn crop had an average of 90% of their fields planted by the end of May over the past 5 years. As of May 26, 2019, 58% of the corn crop and just 29% of soybeans were planted. 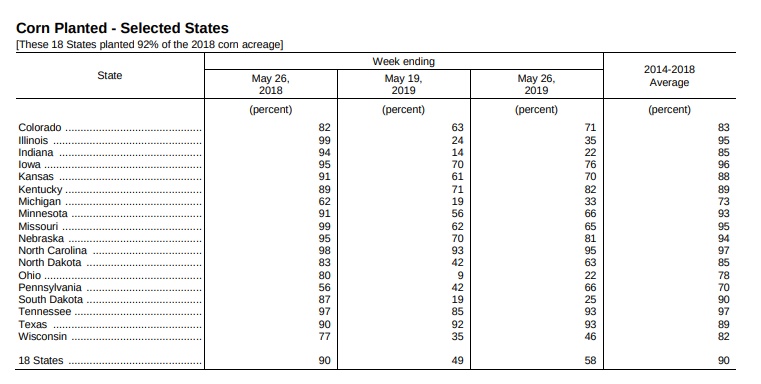 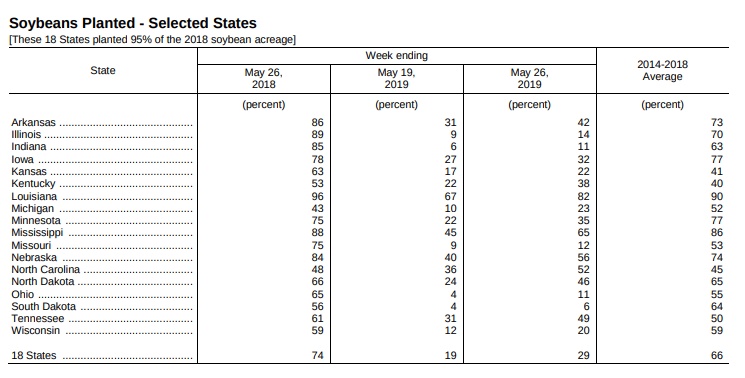