Corn production for 2019/20 is forecast to decline 1.4 billion bushels to 13.7 billion, which if realized would be the lowest since 2015/16. Unprecedented planting delays observed through early June are expected to prevent some plantings and reduce yield prospects.

USDA will release its Acreage report on June 28, which will provide survey-based indications of planted and harvested area. With sharply lower supplies, use is projected to decline 425 million bushels to 14.3 billion, based on reductions to feed and residual use and exports. With supplies falling more than use, ending stocks are projected to decline 810 million bushels to 1.7 billion, which if realized would be the lowest since 2013/14. 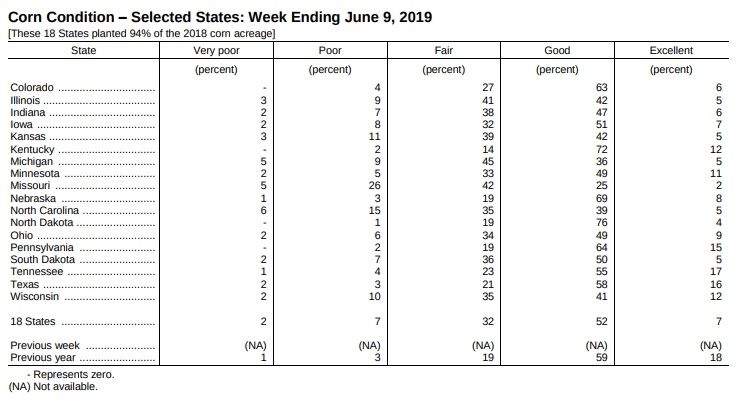 AccuWeather’s latest corn and soybean yield analysis predicts a big variation from the early U.S. Department of Agriculture (USDA) estimates as a result of flooding and continued wet, difficult growing conditions throughout the U.S. Corn Belt.

"Soybeans won’t be impacted as much because you can plant them all the way through the end of June and you won’t lose much in yield," said AccuWeather Senior Meteorologist Jason Nicholls. "At this point, the vast majority of farmers who haven’t planted corn yet are filing for insurance or planting soybeans."

However, Kevin Kloesel, director of the Oklahoma Climatological Survey said insurance and farm aid package won't solve farmers' problems. "We’re talking about probably a billion-dollar disaster in the region on the ag side."