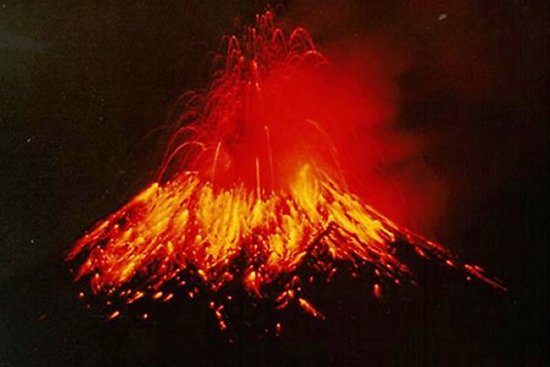 The Tungurahua volcano continues with constant emissions of ash that started on April 20. Since early this morning, at approximately 01:00 (local time), the volcano exhibited an increase in the amplitude of internal vibrations as well as a slight variation in the type of seismic activity, the harmonic tremor recorded signals that would evidence greater pressure within the volcano.

The explosions have caused the significant ash deposits in the Baños, Runtún, Ulba, Rio Blanco, San Juan and La Juive, with a slight presence in the canton Patate (Guadeloupe). Since yesterday afternoon small landslides of blocks and ash accumulated in the crater rim, which have fallen to 1.5 km below the crater in the north and northwest flanks.

The expulsion of hot material in the form of blocks and lava fountains, accompanied by howls of varying intensity, were observed at night.

All this activity is indicative that the volcanic conduit system beneath the crater of Tungurahua is mainly open allowing a steady flow of gases and ash from the magma.

Based on the above, IGEPN confirms that the current eruptive event is part of the characteristics described in Scenario 1 special bulletin No. 3 from April 21, 2011. However because of the continued deformation of north-western flank and seismic signals that would evidence pressurization inside volcanic conduits, they can not yet rule out the possibility of progression to Stage 2 of that bulletin, which was described as a more explosive behavior in the volcano with pyroclastic flow generation.