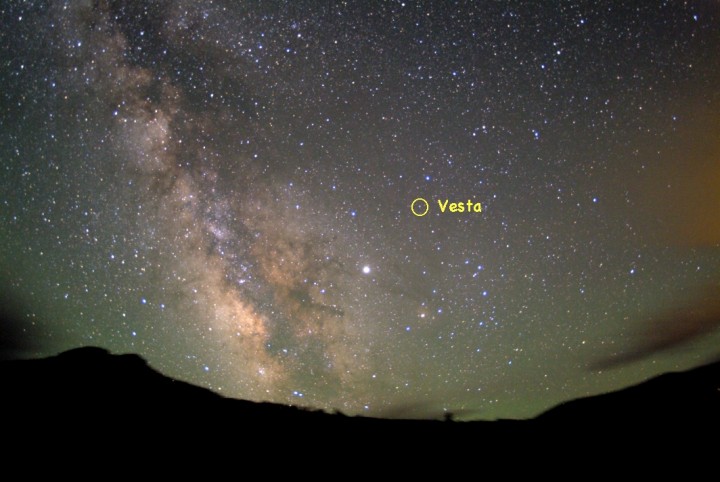 On March 29, 1807, German astronomer Heinrich Wilhelm Olbers spotted Vesta as a pinprick of light in the sky. Two hundred and four years later, as NASA’s Dawn spacecraft prepares to begin orbiting this intriguing world, scientists now know how special this world is, even if there has been some debate on how to classify it.

Many astronomers call Vesta an asteroid because it lies in the main asteroid belt between Mars and Jupiter. But Vesta is not a typical member of that orbiting rubble patch. The vast majority of objects in the main belt are lightweights, 100 kilometers wide or smaller, compared with Vesta, which is a 530 kilometer-wide behemoth.

“I don’t think Vesta should be called an asteroid,” said Tom McCord, a Dawn co-investigator based at the Bear Fight Institute, Winthrop, Wash. “Not only is Vesta so much larger, but it’s an evolved object, unlike most things we call asteroids.” 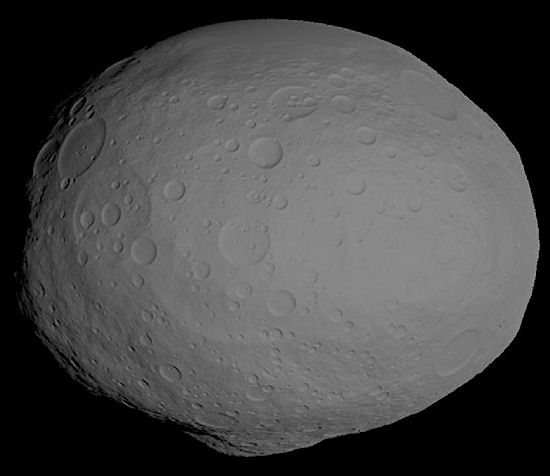 The layered structure of Vesta (core, mantle and crust) is the key trait that makes Vesta more like planets such as Earth, Venus and Mars than the other asteroids, McCord said. Like the planets, Vesta had sufficient radioactive material inside when it coalesced, releasing heat that melted rock and enabled lighter layers to float to the outside. Scientists call this process differentiation.

McCord and colleagues were the first to discover that Vesta was likely differentiated when special detectors on their telescopes in 1972 picked up the signature of basalt. That meant that the body had to have melted at one time.

Officially, Vesta is a “minor planet” — a body that orbits the sun but is not a proper planet or comet. But there are more than 540,000 minor planets in our solar system, so the label doesn’t give Vesta much distinction. Dwarf planets – which include Dawn’s second destination, Ceres — are another category, but Vesta doesn’t qualify as one of those. For one thing, Vesta isn’t quite large enough.

Dawn scientists prefer to think of Vesta as a protoplanet because it is a dense, layered body that orbits the sun and began in the same fashion as Mercury, Venus, Earth and Mars, but somehow never fully developed. In the swinging early history of the solar system, objects became planets by merging with other Vesta-sized objects. But Vesta never found a partner during the big dance, and the critical time passed. It may have had to do with the nearby presence of Jupiter, the neighborhood’s gravitational superpower, disturbing the orbits of objects and hogging the dance partners.

Other space rocks have collided with Vesta and knocked off bits of it. Those became debris in the asteroid belt known as Vestoids, and even hundreds of meteorites that have ended up on Earth. But Vesta never collided with something of sufficient size to disrupt it, and it remained intact. As a result, Vesta is a time capsule from that earlier era.

“This gritty little protoplanet has survived bombardment in the asteroid belt for over 4.5 billion years, making its surface possibly the oldest planetary surface in the solar system,” said Christopher Russell, Dawn’s principal investigator, based at UCLA. “Studying Vesta will enable us to write a much better history of the solar system’s turbulent youth.“

Dawn’s scientists and engineers have designed a master plan to investigate these special features of Vesta. When Dawn arrives at Vesta in July, the south pole will be in full sunlight, giving scientists a clear view of a huge crater at the south pole. That crater may reveal the layer cake of materials inside Vesta that will tell us how the body evolved after formation. The orbit design allows Dawn to map new terrain as the seasons progress over its 12-month visit. The spacecraft will make many measurements, including high-resolution data on surface composition, topography and texture. The spacecraft will also measure the tug of Vesta’s gravity to learn more about its internal structure.

“Dawn’s ion thrusters are gently carrying us toward Vesta, and the spacecraft is getting ready for its big year of exploration,” said Marc Rayman, Dawn’s chief engineer at NASA’s Jet Propulsion Laboratory, Pasadena, Calif. “We have designed our mission to get the most out of this opportunity to reveal the exciting secrets of this uncharted, exotic world.” (NASA Science News)

When is an Asteroid Not an Asteroid? (DAWN.jpl.nasa)
Model of Vesta
Hubble Reveals Huge Crater on the Surface of the Asteroid Vesta (SolarViews)
Vesta Meteorite (SolarViews)