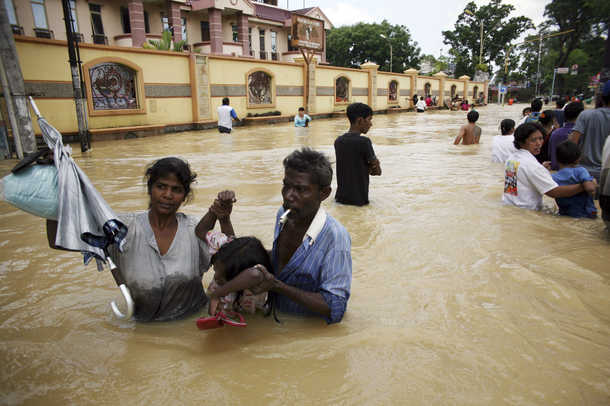 The dike on Cucukan River in Tanjung Putus village, Padang Tualang sub-district, collapsed. Damage to the river dike became worse in the morning due to strong river currents due to constant heavy downpours over the last couple of days. 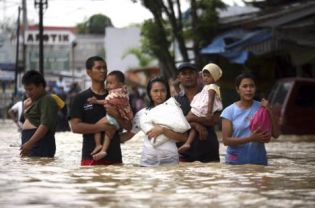 Cucukan is an estuary of Batang Serangan that extends to Gunung Lauser National Park. Many farms and plantations had also been flooded. Floods resulting from days of high-intensity rains have wreaked havoc in Sumatra, Java and Papua, forcing thousands of residents from their homes.

Heavy tropical downpours cause dozens of landslides and flash floods each year in the country, where millions of people live in mountainous regions and near fertile flood plains close to rivers.

In Medan, North Sumatra, waters from the rain-swollen Babura, Deli, Bederah and Denai rivers had inundated thousands of houses since early Friday, residents there said. (TheJakartaGlobe)

Due to the continuous rain fall since last week, hundreds of houses in the city of Medan, North Sumatra, this morning submerged in water up to 2 meters tall. Floods that inundated hundreds of homes occurred in some areas such as Kampung Aur Gang Merdeka, Medan District Maimun and Simalingkar. According Ucok, residents of Kampung Aur, the water begins to inundate settlements residents since Friday(01/04/2011) at 01.00 pm. Since then the water is getting higher. Even the floods drown almost home. Residents still worried would flood the article prolonged rain is still often falls. They can only try to save valuables.Luckily there were no fatalities in this natural disaster. Because there is no assistance from local government, local people also collect donations from riders of motorcycles and cars passing in the region. 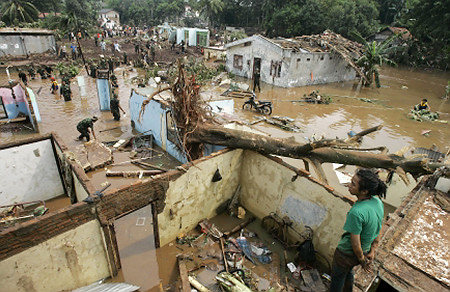 Flooding that hit Lamongan, East Java, until this morning continued to expand.Heavy rain still occur resulting in increased water discharge Lamong River. Worst flooding in the last 3 months continued to expand inundating 38 villages in five districts in Lamongan. A total of 38 villages were inundated in District Turi, Deket District, District Glagah, District Karang Binangun, and Sub Kalitengah.
According to Nadi, residents Glagah,during the last 3 months of water always comes if rainfall is high. In Sub Glagah, flooding is the third time this has happened. “Floods inundate settlements like this until a few weeks,” said Nadi, on Tuesday (29/03/2011). The worst affected are in Sub Kalitengah. In this district 11 villages soaking water. In addition to soaking thehouse, Solo River flood of children is also soak thousands of hectares of ponds. Flooding also has cut a number of main lines between districts in Lamongan. The level of water reached 40 inches on the highway so that traffic at all threatening. Not only that flooded a long way to reach 2 miles. This condition is exacerbated by the destruction of the road.