Based on information from the Mexico City MWO, analyses of satellite imagery, and web-camera views, Volcanic Ash Advisory Center reported that on 26 March an ash-and-gas plume from Popocatépetl drifted ESE and SE. A subsequent notice that day stated that the ash had dissipated approximately 140 km SE. On 27 March a small ash plume drifted almost 150 m E.

The name Popocatepetl comes from the Nahuatl words popōca 'it smokes' and tepētl 'mountain', thus Smoking Mountain. The name Don Goyo comes from the mountain's association in the lore of the region with San Gregorio (St. Gregory), "Goyo" being a nickname-like short form of Gregorio. It towers to 5,426 m 70 km SE of Mexico City and is North America's second-highest volcano. Frequent historical eruptions have been recorded since the beginning of the Spanish colonial era. A small eruption on 21 December 1994 ended five decades of quiescence. Since 1996 small lava domes have incrementally been constructed within the summit crater and destroyed by explosive eruptions. Intermittent small-to-moderate gas-and-ash eruptions have continued, occasionally producing ashfall in neighboring towns and villages. 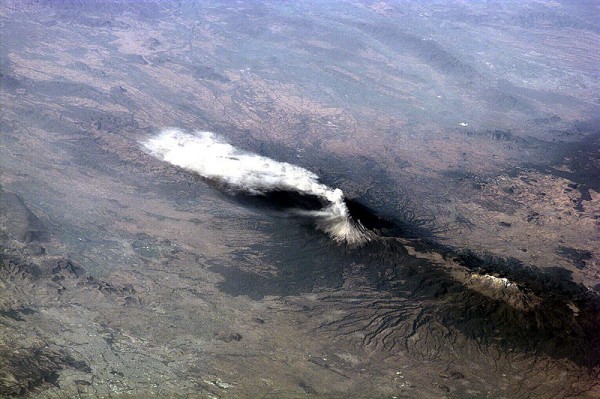 Popocatepetl is one of the most violent volcanoes in Mexico, having had more than 15 major eruptions since the arrival of the Spanish in 1519. A major eruption occurred in 1947 to begin this cycle of activity. Then, on December 21, 1994, the volcano spewed gas and ash which was carried as far as 25 km (16 mi) away by prevailing winds. The activity prompted the evacuation of nearby towns and scientists to begin monitoring for an eruption. In December 2000, tens of thousands of people were evacuated by the government based on the warnings of scientists. The volcano then made its largest display in 1,200 years

Legend of Popocatépetl and Iztaccíhuatl