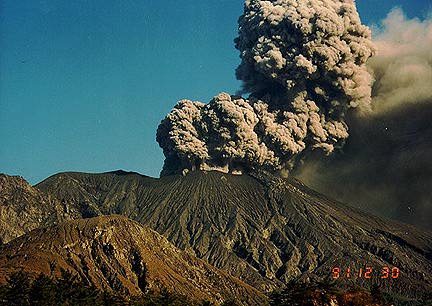 Sakurajima (also spelled Sakurashima or Sakura-jima, 桜島 in Japanese) volcano in southern Kyushu is one of the most active volcanoes in the world, and one of the few that are at present in constant (persistant) activity. Its ongoing typical activity range from strong strombolian to large ash explosions every 4-24 hours. The volcano is located across Kagoshima Bay only 8 km east of the city of Kagoshima with a population of half a million. Sakurajima’s eruptive history has been recorded since the 8th century. It has frequently deposited ash on Kagoshima, and due to its explosive potential, considered a very dangerous volcano and closely monitored. The largest historical eruptions of Sakurajima took place during 1471-76 and in 1914. (VolcanoDiscovery)

Sakurajima is located in the Aira caldera, formed in an enormous eruption 22,000 years ago. Several hundred cubic kilometres of ash and pumice were ejected, causing the magma chamber underneath the erupting vents to collapse. The resulting caldera is over 20 kilometres (12 miles) across. Tephra fell as far as 1,000 kilometres (620 miles) from the volcano. Sakurajima is a modern active vent of the same Aira caldera volcano.

Sakurajima was formed by later activity within the caldera, beginning about 13,000 years ago. It lies about 8 kilometres (5 miles) south of the centre of the caldera. Its first eruption in recorded history occurred in 963 AD. Most of its eruptions are strombolian, afecting only the summit areas, but larger plinian eruptions have occurred in 1471–1476, 1779–1782 and 1914. <6 >

Volcanic activity at Kitadake ended around 4,900 years ago: subsequent eruptions have been centered on Minamidake.

For all you UFO-watchers there were numerous reports about UFO sighting above the crater prior the latest eruption. There are some videoclips @youtube and here are some for start: 1, 2