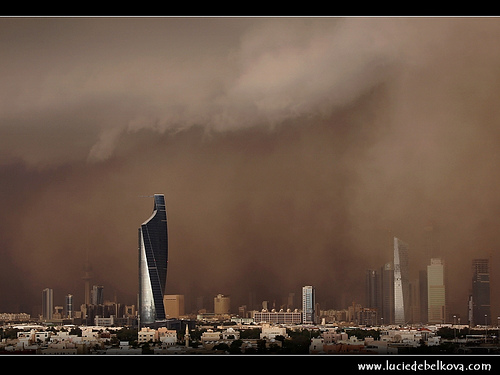 A menacing black dust storm hit the country at a speed of over 50 kms per hour Friday evening, plunging the country into complete darkness before sunset. The storm reduced visibility to almost zero in some areas of the country and disrupted mobile phone services for almost 30 minutes as panicked citizens and residents tried to call to check the safety of their loved ones.

The Operations Room of the Interior Ministry received more than 200 calls for assistance; the most urgent among them was from a boat stranded in mid-sea. Nearly 100 female students were onboard and were on their way to Failaka Island when the storm came threatening. Security forces and Coast Guard members sprung into action and managed to bring the boat safely to shore.

To add to all the panic, rumors about an enormous fire near the beach spread like wild fire and subsided only when it became evident that the black cloud was a dust blanket and not smoke from a fire.

The dust storm first entered Jahra and moved towards the Capital area and then to the rest of the areas. Meteorologist at the Weather Forecast Department of the Directorate-General of Civil Aviation (DGCA) Issa Ramadan said northwesterly winds blowing at a speed of more than 50 kms per hour caused the dust storm. He and astronomer Saleh Al-Ojairi confirmed that there was almost zero visibility in some areas of the country. 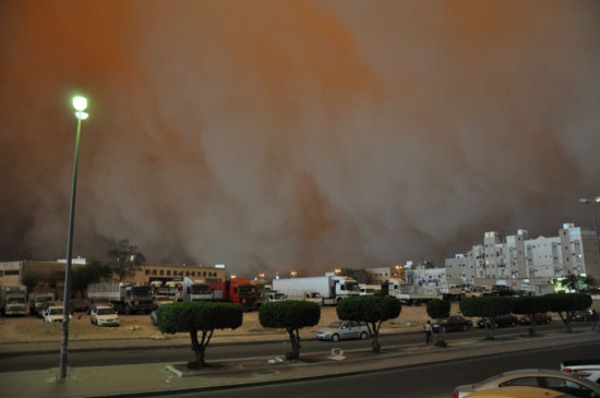 Meanwhile, security forces, traffic patrols, fire fighters and members of Civil Defense Directorate were mobilized to tackle any accident or emergency. Patrols were deployed on all highways and the Interior Ministry urged all citizens and residents to stay indoors until visibility improves.

There were reports that northern areas of the country witnessed heavy rainfall, which helped in clearing the black dust layer to some extent. (Awad Al-Farhan and Mohammad Al-Enezi/Arab Times)

While incoming flights were directed to other nearby airports, outgoing flights were cancelled. The dust storm is travelling from Iraq to Iran and into the Persian Gulf. The storm spans more than 100 kilometers and is very thick. 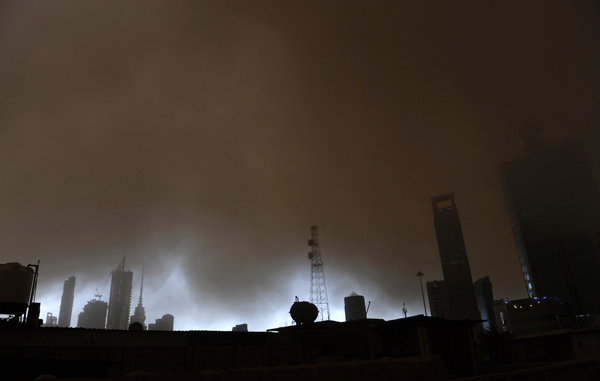 The massive Kuwait sandstorm on Friday evening will affect the UAE reducing visibility to upto 2,000 metres. UAE emergency agencies and the Meterology Department, have, as a preventive measure, asked people to stay indoors and especially stay away from open spaces, like the beach as they assess the storm blowing towards the Emirates.

It is expected that the strong winds will travel towards Bahrain and Qatar and it will reach the UAE, resulting in low visibility, especially on highways. This condition started today in South Iraq and North West Kuwait which witnessed low pressure combined with strong winds at 80kmph. Earlier, the authorities warned that the dust storm reduced visibility to less than 500 metres and that in some areas, “there is no visibility at all.”

According to unconfirmed reports hundreds of people were stuck in malls as dust and sand prevented people from driving. The condition is due to a dusty storm kicking up northwestern wind at a speed of more than 50 kilometres per hour.