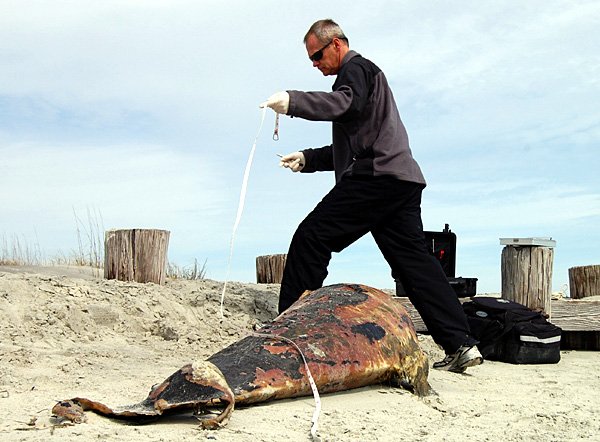 A large pygmy sperm whale carcass washed up by the Morris Island lighthouse and was found over the weekend. It was too decomposed to say what killed it, researchers concluded.

The whale stranding follows a string of 13 bottlenose dolphin carcasses since late February. And a marine mammal stranding crew was in Charleston Harbor Monday recovering another dolphin carcass. But the pygmy sperm carcass is only the second whale to wash up on a South Carolina beach this year. A dwarf sperm whale was discovered in January.

The 11-foot-long male whale found on Morris Island didn’t appear to have any external woundsand its organ were so far decomposed. The ocean service lab is waiting the results of pathology tests of the dwarf sperm whale. 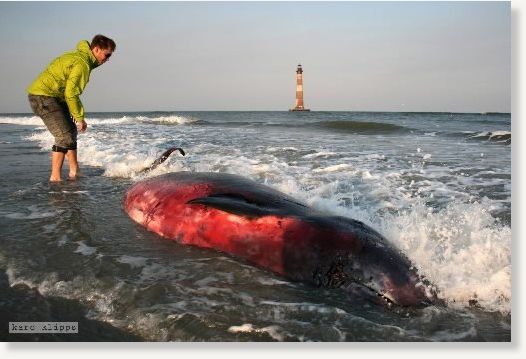 Marine mammal strandings along the South Carolina coast tend to spike in the spring and fall each year, when migrating animals are on the move. But in the past few years, strandings have spiked in mid-winter. The most likely explanation is the same winter cold snaps that led to mass bait fish kills along the beaches. The cold depletes the shallows of food-fish schools for the dolphin. Dolphins that already are sick can’t catch enough to sustain themselves, so they weaken and gradually die, sometimes of pneumonia.

Most of the dolphins found so far have been too decomposed to determine exactly what killed them. But a dolphin that was found on Kiawah Island last week was intact enough to maybe give the scientists an indication. The lab is also waiting on those test results. (ThePost&Courier)

Stranding statistics for South Carolina
An average 52 marine mammals strand per year – 80% are bottlenose dolphins,10% are pygmy and dwarf sperm whales. Other species include dolphin and beaked whales, large whales, seals… Most live strandings are single animals that are sick and dying. Most animals must be euthanized. 25% of bottlenose dolphins strand with evidence of human interaction, usually entanglements or ingested plastics.(South Carolina Marine Mammal Stranding Network, Coastal Carolina University)