Deadly heatwaves will be more frequent in coming decades

A new study warns that 'mega-heatwaves' like the one estimated to have killed tens of thousands in western Europe in 2003 will become up to 10 times more likely over the next 40 years. The new analysis revealed that heatwave that scorched eastern Europe in 2010, killing thousands of people and devastating crops, was the worst since records began and led to the warmest summer on the continent for at least 500 years.

The research also suggests that "mega-heatwaves", such as the prolonged extreme temperatures that struck western Europe in 2003 will become five to ten times more likely over the next 40 years, occurring at least once a decade. But the 2010 heatwave was so extreme – 10C above the average for the first week of August between 1970 and 2000 – that similar events are only expected to occur once every 30 years or so. 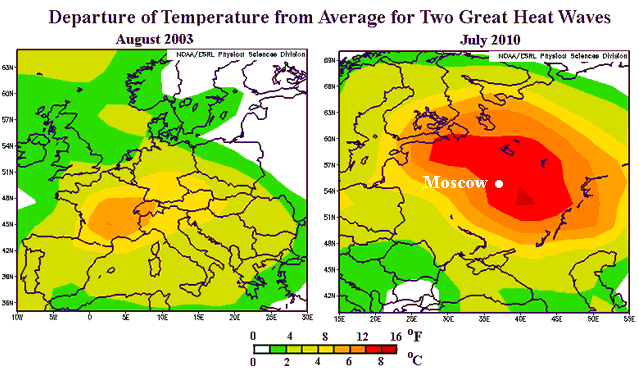 Russian's heatwave from last year are estimated to have killed 50,000 people. Mortality rates in Moscow doubled compared with the previous year, filling morgues to capacity as people succumbed to heatstroke and respiratory problems. Russian Meteorological Center: “There was nothing similar to this on the territory of Russia during the last one thousand years in regard to the heat.” More heat-related deaths are expected to have occurred in the Baltic states, Ukraine and Kazakhstan, though these figures have not yet been estimated. The mega-heatwave also cut the Russian grain yield by 25%, sending food prices soaring, and left a million hectares of land burned. The nation's losses are estimated at $15bn. Over 15,000 likely dead in Russia, 17 nations comprising 19% of Earth's total land area set extreme heat records this year, July was "sixth straight record warm month in the tropical Atlantic. (ClimateProgress) 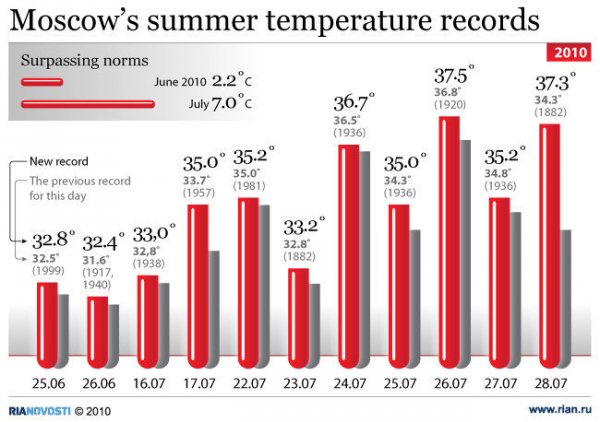 Team of researchers led by David Barriopedro at the University of Lisbon in Portugal. The team examined the temperature, duration and spatial extent of the 2010 heatwave and found it exceeded the previous record year of 2003, which had also caused tens of thousands of deaths. The analysis, published in the journal Science, revealed the unprecedented nature of the 2010 heatwave using temperature measurements dating back to 1871 and estimates from tree rings and other proxies going back to 1500.

Record extremes were seen over an area of two million square kilometres. The heatwave was caused by high pressure weather systems lingering over the continent. The decade up to 2010 was also exceptional - across the whole of Europe, records that had held for 500 years were broken over two-thirds of the land mass.

2010 was the warmest year ever in India since weather records began in 1901. Meteorological Department announced that the mean annual temperature in the country during 2010 was as much as 0.93 degrees Celsius higher than the long term (1961-1990) average. IMD officials said the record heat in 2010 was a continuation of the warming trend in the past decade that can only be attributed to global warming. The last decade has been the warmest in the country’s history. The previous warmest year was 2009, when the annual mean temperature was 0.913 degrees C above the long term average.

Climate scientists expect increasing greenhouse gas concentrations in the atmosphere to raise both average temperatures and summer variability in Europe, leading to more heatwaves. The findings of the study are consistent with this, said Barriopedro: "Under global warming this kind of event will become more common. Mega-heatwaves are going to be more frequent and more intense in the future."

Previous research has shown that global warming made the 2003 heatwave at least twice as likely, but modelling studies have not yet been done that might demonstrate the link between climate change and the 2010 heatwave. Recently, scientists showed that climate change made the 2000 floods that swamped England two to three times as likely to happen.

There are serious risks of major harm to people and crops in the future unless action is taken. Some countries took additional precautions after the 2003 heatwave, for example providing early warning systems, cool rooms in homes for the elderly and by creating green spaces in cities that help control temperatures. (Guardian) 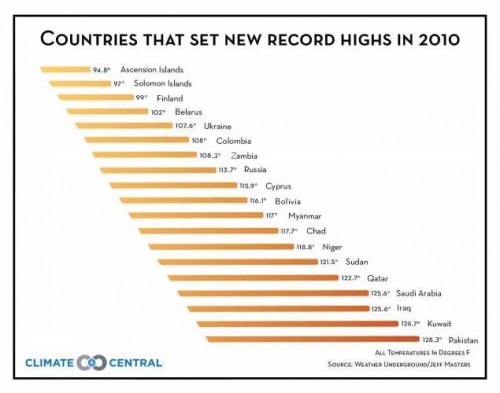 It doesn't take decades of warming to cause global chaos. Heat waves like this could have immediate economic repercussions long before glaciers melt or sea levels rise. Especially if they occur in economically powerful or troubled parts of the world in succession. Modern civilization has never been forced to adapt to changes in our environment occurring this fast. Seven billion people are dependent on a fragile, overly stressed infrastructure, built on the assumption that conditions in the future will remain as they have been. Rapid climate change violates that assumption and heat waves are just one of the points of the spear potentially causing famine, financial volatility, and hyper inflation. The ingredients for economic collapse and political upheaval, extremism, and even war.

Fossil fuel industry apologists would call attempts to mitigate those effects we can control, and preparing to deal with the consequences of those we can't, alarmism. Most people would call it wisdom. (Examiner)

Global surface temperatures in 2010 tied 2005 as the warmest on record, according to an analysis released Wednesday by researchers at NASA’s Goddard Institute for Space Studies (GISS) in New York.

The two years differed by less than 0.018 degrees Fahrenheit. The difference is smaller than the uncertainty in comparing the temperatures of recent years, putting them into a statistical tie. In the new analysis, the next warmest years are 1998, 2002, 2003, 2006, 2007 and 2009, which are statistically tied for third warmest year. The GISS records begin in 1880.

The analysis found 2010 approximately 1.34°F warmer than the average global surface temperature from 1951 to 1980. To measure climate change, scientists look at long-term trends. The temperature trend, including data from 2010, shows the climate has warmed by approximately 0.36°F per decade since the late 1970s.

“If the warming trend continues, as is expected, if greenhouse gases continue to increase, the 2010 record will not stand for long,” said James Hansen, the director of GISS….The record temperature in 2010 is particularly noteworthy, because the last half of the year was marked by a transition to strong La Niña conditions, which bring cool sea surface temperatures to the eastern tropical Pacific Ocean.

“Global temperature is rising as fast in the past decade as in the prior two decades, despite year-to-year fluctuations associated with the El Niño-La Niña cycle of tropical ocean temperature,” Hansen and colleagues reported in the Dec. 14, 2010, issue of Reviews of Geophysics.

“The year 2010 now has the most national extreme heat records for a single year–nineteen,” Jeff Masters noted in November. “These nations comprise 20% of the total land area of Earth. This is the largest area of Earth’s surface to experience all-time record high temperatures in any single year in the historical record.”

The 12 hottest years on record have occurred since 1997. 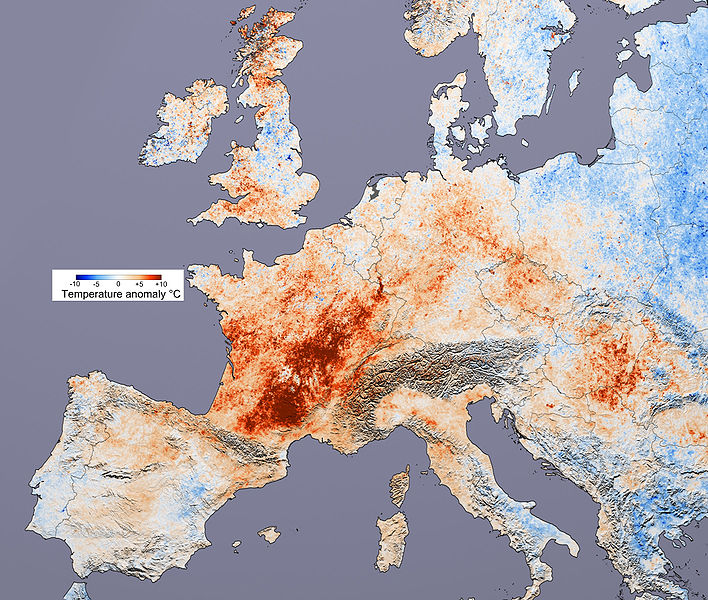 The 2010 Northern Hemisphere summer included severe heat waves that impacted most of the United States, Kazakhstan, Mongolia, Taiwan, China, North Africa and the European continent as a whole, along with parts of Canada, Russia, Indochina, South Korea and Japan during May, June, July and August 2010.

The heat wave during the summer of 2010 was at its worst in June over the eastern United States, Middle East, Eastern Europe and European Russia, and over Northeastern China and southeastern Russia. June 2010 marked the fourth consecutive warmest month on record globally, at 0.66 °C (1.22 °F) above average, while the period April–June was the warmest ever recorded for land areas in the Northern Hemisphere, at 1.25 °C (2.25 °F) above average. The previous record for the global average temperature in June was set in 2005 at 0.66 °C (1.19 °F), and the previous warm record for April–June over Northern Hemisphere land areas was 1.16 °C (2.09 °F), set in 2007. The weather caused forest fires in China, where three in a team of 300 died fighting a fire that broke out in the Binchuan County of Dali, as Yunnan suffered the worst drought in 60 years by February 17. A major drought was reported across the Sahel as early as January. In August, a section of the Petermann Glacier tongue connecting northern Greenland, the Nares Strait and the Arctic Ocean broke off, the biggest ice shelf in the Arctic to detach in 48 years.

The World Meteorological Organization stated that the heat waves, droughts and flooding events fit withpredictions based on global warming for the 21st century, include those based on the Intergovernmental Panel on Climate Change's 2007 4th Assessment Report although still no specific weather events can be linked directly to climate change.However, some climatologists argue that these weather events almost definitely would not have happened if the atmospheric carbon dioxide was at pre-industrial levels.(W)


Study: Global Warming to Bring Increased Heat Waves to US
FEMA: Are You Ready for Extreme Heat
List of Weather records