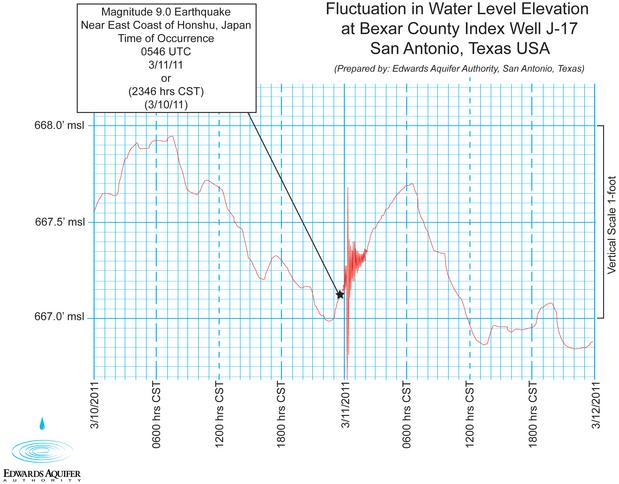 South Florida Water Management District‘s groundwater gauges recorded the unusual activity about 30 minutes after the 9.0 tremor rumbled across northeastern Japan on March 11. According to the recordings, the water level fluctuated about 7,5cm (3inches) over a two-hour period. It seems like Japan’s earthquake was so powerful that it actually sent ripples through South Florida’s underground water supply.

The ripples were recorded by gauges over a widespread area that included Everglades National Park, Palm Beach County, St. Lucie County and Highlands County.  Sofisticated gauges are placed between 100 and 600 meters  underground into the Floridan Aquifer. The water management district uses them to monitor regional water resources.

“We were surprised that that signature showed up and for that length of time, as well,” said Susan Sylvester, the district’s director of operations control. Technicians saw similar fluctuations in the local groundwater following both the Haitian and Chilean earthquakes in 2010. They expected those readings because the quakes were closer to Florida, but the earthquake in Japan was farther away than anyone anticipated detecting.

The Floridan aquifer, as opposed to surficial aquifers, is the portion of the principal artesian aquifer that extends into Florida, parts of southern Alabama, southeastern Georgia, and southern South Carolina. In Florida it supplies the cities of Daytona,Flagler Beach, Gainesville, Tampa, Jacksonville, Ocala, St. Petersburg, and Tallahassee, several municipalities in South Florida, and numerous rural communities.

Groundwater in the Floridan aquifer is contained under pressure by a confining bed of impermeable sediments. When the water pressure is great enough, the groundwater breaks to the surface and a spring flows. Water temperature and flow from a Floridan spring is relatively constant.

The water level of  Texas’ Edwards Aquifer was displaced about a foot Friday after energy released from a massive earthquake near Japan put the squeeze on the underground rock formation that supplies drinking water for much of Central Texas.

The 9.0-magnitude quake caused its walls to contract and expand, officials with the Edwards Aquifer Authority said Wednesday. A monitor in a Bexar County well that continuously records the aquifer’s water level noted the oscillations, which lasted about two hours from late Thursday to early Friday morning, said Geary Schindel , the authority’s chief technical officer. The force from the quake took about 15 minutes to reach the aquifer.

“When a wave from an earthquake passes, it slightly compresses and dilates the aquifer, and the water will shoot up and down,” Schindel said. “Any time we see a major earthquake, it’s commonly recorded in that well. They act as seismographs.”

The oscillations during high-energy earthquakes are common in artesian aquifers, or confined aquifers, where the water is pressurized, including the Edwards Aquifer, Schindel said. “We saw Haiti, we saw Sumatra, Japan, a couple in Mexico and Alaska,” he said of recent earthquakes.

The well, named J-17 , has been monitoring the aquifer’s water level in Bexar County since the 1950s, Schindel said. A float that rests on the water surface hundreds of feet underground is connected to a wire and a wheel that records the level on pen and paper, he said. Water restrictions are tied to readings, Schindel said.

The sprawling aquifer cuts underground through Central Texas and provides drinking water for about 1.7 million people, including most of San Antonio, said Roland Ruiz, spokesman for the regulatory agency that manages and protects the aquifer’s San Antonio segment.

Meanwhile, oil appears to have washed on shore in Boca. At the beach just off of Spanish River Blvd., dozens of clumps were collected by beachgoers on Friday afternoon.

One had a plastic bag filled with about five pounds of oil.  The oil was in flat, rubbery clumps, between three and ten inches long. There is no word yet on where the oil may have come from, exactly what type of substance it is, or if it is dangerous. More about that here and here.