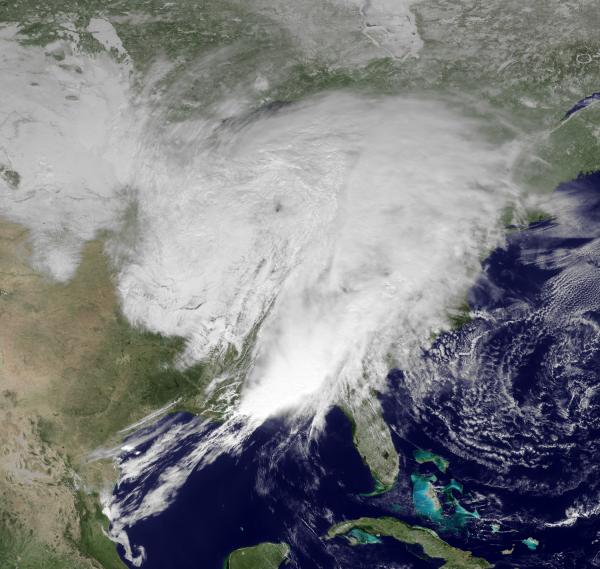 A storm system, pictured above, that swept across the Deep South, bringing more than a dozen reported tornadoes, is moving up the East Coast. The storm system will bring heavy rains to parts of the Northeast that are already at an above average flooding risk, including southern New England and the Catskill Mountains in New York, according to the spring flood forecast from the U.S. National Oceanic and Atmospheric Administration (NOAA).

October and November rains in these areas soaked the soil, and then whopper winter storms bought above average snowfall and river icing. If heavy rains fall when the snowpack melts, the rivers and streams could spill over the watersheds, triggering floods.

Communities up and down the eastern seaboard are preparing for more rain to be added to soaked ground and swollen streams and rivers. Some areas could see upwards of 5 inches (13 centimeters) of rainfall over the next 48 hours. A below average risk for flooding was forecast in most of the Mid-Atlantic and Southeast. The new storm system could change that, and the National Weather Service's Storm Prediction Center has issued flood warnings in these areas.

The satellite image above, taken this afternoon, shows the huge size of the low pressure system bringing in all this rain. The rains will be concentrated east of the Appalachian Range. 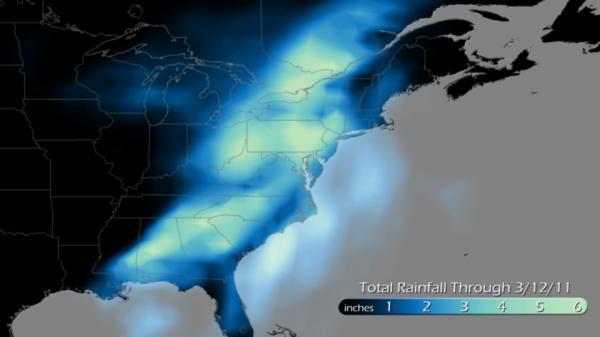 Flooding is possible from the Mississippi Valley through the western Carolinas due to the heavy rain falling on saturated ground, according to the Kevin Roth, lead meteorologist at the Weather Channel. More river and stream flooding is likely later in the week from southern New England to Virginia, according to Roth's forecast. (OurAmazingPlanet)